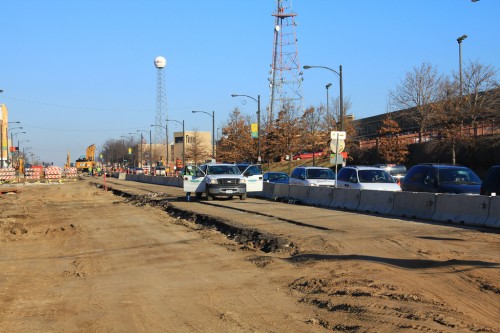 Construction proceeding last year on what was one of the worst stretches of pavement on University Avenue.

I still remember my early excursions on Metro Transit’s old #6 bus to Roseville. Peering out into the dark as I felt the vehicle vibrate as it bounced over every little bump. Those rides were often an assault on my senses, forcing me to gird my stomach against pitching and rolling motions while I restrained my fears that the bus would shake itself to pieces.

I grew up in a suburb of Rochester and had hardly set foot on buses at all until I came up to the University of Minnesota after high school. The value of the on-campus shuttle buses was very clear (especially since they were, and remain, free to use). While they often lurch and rattle as much as the regular city buses, my early trips on them were pretty short—rarely more than a mile. Shifting over to using regular transit buses after college was never as easy as I’d hoped.

The Hiawatha Line was in the midst of being constructed when I graduated, and I followed many of the ages-old bus vs. rail debates at the time. I attended the line’s opening ceremony in 2004 and took as many opportunities as I could to ride it, learn how it worked, and compare it to how the bus system operates. Some of the reasons I’d heard in favor of rail were debunked, at least in part, while others were enforced and refined.

For instance, I always used to hear about how rail vehicles were silent. While Hiawatha Line trains are often pretty quiet, they aren’t silent—in some cases they make loud screeching sounds (most noticeable on the Hiawatha Avenue flyover just north of Lake Street). Similarly, ride quality is much better on Hiawatha trains than it is on a typical bus. Riders still get jostled when passing through switches and might get caught off-guard as the train speeds up or slows down, it’s still vastly better than a typical bus ride. I have a much more difficult time reading text in books or on my phone when riding the bus than on the train, simply because the bumpy ride and vibrations from the diesel engine make everything shake so badly.

While part of the difference in ride quality between buses and trains has to do with the vehicles, much of the gap is due to the surface that they ride on. Railroad tracks have to be maintained within a certain tolerance, otherwise trains derail. As rails wander out of tolerance because of use, the speed limit on the tracks is reduced progressively until it becomes impractical to actually carry any traffic.

Roads are different, however. They just degrade and degrade, yet vehicles still go at the same speed because there’s usually little risk of cars crashing if the surface has simply become a bit bumpier. (I have certainly wondered about some roads, however.)

Buses seem to be affected by bumps much more than cars since their immense weight makes it hard for the suspension to deal with poor pavement. Small imperfections get amplified, resulting in almost invariably bad ride quality.

Streets and highways that see lots of bus traffic should be prioritized for repair and repaving projects, and not just because it would help the bus glide along more smoothly. Much like the broken windows theory of crime, I feel that there’s a strong case for a similar “broken pavement theory” related to the quality of life in a neighborhood.

Minneapolis and Saint Paul have begun attacking some long-damaged streets in the past few years, and it’s often remarkable to see the road surface and sidewalks in a pristine state. Battered pavement is often a sign of bureaucratic paralysis brought on by budgetary belt-tightening over the course of years and decades. As freeways were built in the latter half of the 20th century, city streets were often left to rot.

While a lot of attention goes into designing and maintaining parks and plazas as public spaces, streets are the most basic type of public spaces I can think of. They should be treated with respect, and designed to facilitate many different modes of travel. Better surfaces don’t just help cars or buses—well-designed spaces make things more comfortable for cyclists and pedestrians, and improves the value of properties along the way.

Next time you feel that busted old street, think about the decisions that led to it becoming a low priority, and try to make sure it doesn’t happen again.