Remodeling Wrigley Field’s awesome urbanism should be a sin.

I have been a baseball fan all my life. I went to my first Twins game at Met Stadium when I was less than a year old (or so I am told), and saw them win the ’91 World Series from the upper deck of the Metrodome. I’ve been following the sabermetric revolution since 2001, when I started paying attention to the Twins new crop of young players — Hunter, Jones, Mientkewicz, Koskie, Santana (eventually), Mauer and Morneau — as they began to gel and win games. That’s about the same time that an excellent group of Twins‘ bloggers emerged onto the internet and began critically analyzing the best and worst Twins’ performances. Because of their great writing, I’ve endured the Twins’ last few seasons — the terrible trades of Bill Smith (especially Hardy, Ramos, and Young), the inability of the front office to sign a decent starter, the back-to-back horrible seasons — with an unflagging optimism.

That’s why last week’s article on “the sabermetrics of urbanism” caught my eye. (SABR stands for the Society of American Baseball Research, people who write statistically-minded outsider analysis.) The author, Michael Hathorne, talks about the movie Moneyball and how the same kind of analytical revolution might occur in urban planning. He asks “what is the currency of urbanism,” and identifies a list of possible statistical measures that might help cities reconsider value.

It’s an interesting question that I’ve pondered before. Let’s call it “saberurbanism.” While there are few crucial differences between cities and baseball that limit the metaphor, at the same time, there are important things that urban design fields can learn from the sabermetric revolution in baseball.

According to pythagorean standings,the 2012 Twins were as bad as they should have been.

The first crucial limit to saberurbanism? One commenter on Hathorne’s piece wrote, “baseball is continuous, society is not.” Actually he’s got it backwards: baseball is discontinuous, society is not. A baseball game is an aggregation of hundreds of repeated, discrete events. Each individual pitch is a single data point, sometimes resulting in balls in play, seperated by long periods of standing around, kicking the dirt, and scratching oneself. This discreteness and discontinuity is the main reason why baseball is so amenable to statistical measure. The sample size and repeatability is very large.

Cities, on the other hand, are extremely complex systems that flow contiuously without separable “events.” (Think of an endless soccer game with millions of players, thousands of balls, and many different goals.) While certain things are measurable (traffic flows, tax receipts), so much remains inherently unquantifiable, and the complex interactions of everyday life are not remotely reducable to sets of numbers.

The second limit of saberurbanism: baseball is commensurable, cities are not. In baseball, even though some ballparks are large and “pitcher friendly,” some small and “hitter friendly”, and some  have giant green walls where left field should be, baseball takes place within relatively comparable spaces. Advanced statistics take into account park effects (even Coors field’s atmosopherics), so that you can make an educated guess as to how many home runs Mauer might hit if he played for Yankees [shudder].

Cities are not like this at all. Notoriously, urban planners often assume that an economic development idea from one city will work in another. (Thus everyone building aquariums back in the 90s, urban malls in the 2000s, landmark museums, university research corridors, downtown casinos today, etc.) But cities aren’t interchangeable like baseball fields. Omaha doesn’t work like Orlando. Portland, Oregon is incomprable to Portland, Maine. You can’t apply “park effects” to apples and oranges.

Finally, cities are moral while baseball games are not. Baseball is literally a game. The Yankees winning another World Series might seem like the 27th coming of the apocalypse, but it really doesn’t matter. On the other hand, the design of cities controls people’s livelihoods. Alex Anthopoulos excepting, the Toronto Blue Jays’ poor start to the season won’t ruin anyone’s life, but Toronto’s allegedly crack-smoking mayor Rob Ford’s policies certainly will. Cities can foster generations of racism, lift people out of poverty, start revolutions, or slowly destroy the planet. The stakes are rather different, and treating urban planning like a game does not do justice to the billions of livliehoods held in the balance.

One of many Delmon Young defensive gaffes / .gifs

That said, there are a few things that the sabermetric revolution can teach urban designers. First, baseball statheads rigorously test their theories. No old baseball assumption goes unchallenged at a SABR convention. For decades, there have been endless debates over whether pitchers can induce outs, the existence of clutch hitting, the importance of batting order, or how catchers “frame” balls and strikes. The adages of old school managers — e.g. the hit and run, bunting, always having a middle infielder in your leadoff spot (ahem, Gardy) — are continually being debunked by the sabermetric community.

That’s something that urbanists should be doing too. Do streetcars really attract investment? Are wider car lanes really safer? Do parking minimums really reduce congestion? Continually challenging the assumptions of the urban design professions is a noble cause, and we can learn a lot from sabermetrics. No theory should go untested.

Second, sabermetrics is excellent at noticing and ridiculing bad investements. Some baseball teams are legendary for signing aging players to long-term contracts. Some cities do the same thing, building spectacular economic development or transportation boondoggles. Ryan Howard’s contract is like Block E. The convention center subsidy is like signing Alfonso Soriano to an eight-year deal. The new Vikings Stadium is going to be for Minneapolis what Barry Zito was for the Giants. (A-Rod = the Big Dig?)

Rejecting bad investments, and developing alternative models for allocating scarce dollars, should be the goal of saberurbanists. Some teams are adept at trading players when they’re most valuable, and signing young players to long-term team-friendly contracts. Is Portland the Tampa Bay Rays of urban planning?

Before she wrote Death and Life, Jacobs pitched for the Racine Belles.

The final lesson of saberurbanism is that outsiders can change the rules of the game. As Moneyball shows, for a long time baseball insiders have been hostile to outside (sabermetric) analysis. People like Bill James have been writing critical analyses of baseball since the 70s, and new measures of value (like OPS, xFIP, WAR, VORP, etc.) have exploded in popularity for decades (especially on the internet). But most teams began paying attention only recently. The Twins just hired their first dedicated statistical researcher, and it seems that most front office people have slender grasp on even basic advanced baseball stats.

Saberurbanism can learn a lot from baseball about how critical outside voices create change within large risk-averse institutions. The same kinds of outside voices have long popped up in urban planning. Jane Jacobs was the Bill James of urbanism, re-evaulating city neighborhoods and activities that had been written off as worthless. For baseball nerds, it took years of building alternative narratives, attending conventions, and sharing publications before insiders began to listen to them. How long will it take for urbanists? 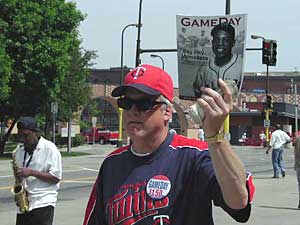 An outsider Gameday vendor from 2005.

For example, I remember when a group of dedicated baseball stat nerds used to sell their own alternative scorecards [called Gameday] outside the Metrodome. It was a far more interesting read, with actually critical thoughts about the Twins’ recent play and some snark about the opposing team. At first, the Twins’ managment saw this as a hostile challenge, and forced Gameday vendors to stand outside stadium property. Eventually the team realized that these devoted nerds were an asset, and now the Gameday notes appear on the official scorecard sold in the stadium.

The point is that it takes a long time to change institutions. Are cities more or less conservative than baseball teams? Are city planners, business leaders, civil engineers, politicans more open to new ideas, to letting go of misleading beliefs, than general managers or pitching coaches?

Changing the Rules of the Game (or Will the Twins have a strikeout pitcher before Minneapolis builds a cycletrack?)

The danger of saberurbanism is that it becomes another form of economics. For example, When Hathorne writes that “consideration should be given towards a human being’s rights regarding free will (ability to choose) that are associated with the human condition,” it crushes my will to live. We can’t continue to measure cities strictly in terms of economic value, no matter how creative we get with the numbers.

But cities can dramatically improve how they quantify value. For example, saberurbanism might replace LOS for cars with LOS for all people, or think more critically whether “jobs created” aren’t just being moved around in the metro area. These kinds of changes, combined with an increasingly wide-ranging counter-narrative about what matters in cities, will hopefully start to change the rules of the game. Cities are not baseball, but cities are complex institutions resistant to change. Maybe by looking at how sabermetrics has changed the game, we can start re-evaluating the really important things about urban life.

9 thoughts on “The Pros and Cons of Saberurbanism”