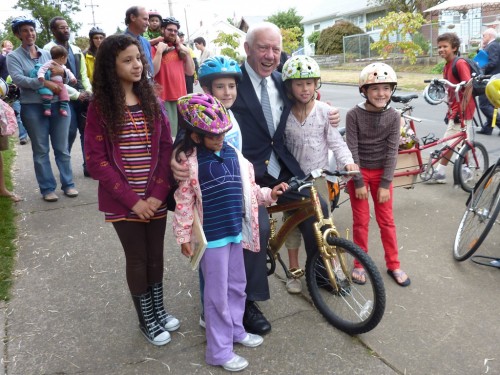 Former Congressman and longtime transportation champion Jim Oberstar died unexpectedly Saturday morning at age 79. News outlets are all posting the usual obituaries that one expects for a man of distinction and achievement.

He was a giant for transportation, not only in Minnesota, but in the United States. He was a member of the House Transportation Committee for his entire term of office (1975-2011). I met him several times, the first time being in 2010 while he was Chair of the House Transportation Committee. I was in Washington for the National Bike Summit. He hosted the Minnesota delegation, first in his office — which was a place of pilgrimage for many of the Bike Summit attendees, not just the Minnesota group — and then in the committee chamber for the Transportation Committee. We got to see one of his bikes, parked safely in his office. He and his staff were warm and welcoming, which was a treat after some of the group had visited some of the other Minnesota congressional representatives.

This was not a man talking the talk. When I had opportunities to ride with him, he was wearing bike shorts that had seen miles. He had calves, serious calf muscles, despite his age and despite his profession (which involves a lot of sitting and bloviating). He averaged 2,000 miles on a bike a year, and had been the victim of a car-bike collision. He knew what it’s like for a biker on the streets, on trails, by day and by night.

Oberstar was a passionate advocate of a carbohydrate-based transportation system. He’d taken up bicycling as a response to grief after the death of his first wife, and converted members of his staff to bike commuters. He co-authored, sponsored and helped pass the milestone SAFETEA-LU legislation in 2005. SAFETEA-LU provided not only for bridges and roads, but for public transportation support and alternative transportation. It was the launchpad for Safe Routes to Schools, a program intended to support and encourage kids to again walk and ride to school. It was also the source of $25 million in federally funded improvements for the city of Minneapolis to encourage bicycling as a significant mode share, under a program known as the Nonmotorized Transportation Pilot Program.

There’s plenty else to be said of Mr. Oberstar’s career, his congressional defeat in 2010, and his overall voting record — including transport issues, as he was an expert in aviation security and served through the years immediately following 9/11. However, there is almost no arguing that without his influence, Minneapolis would not have more than 11% bike/ped mode share. Minneapolis was the feature city in the NMTPP because the program was Oberstar’s brainchild and baby, and despite Minneapolis not being in his district (he served in MN-8, which is the Iron Range), he procured the $25 million for Minneapolis. That money paid for scores of operational projects, numerous infrastructure projects, education programs including many educational programs, additional support for Safe Routes to Schools in the local area, and even the establishment of some of Minneapolis’ first bike boulevards.

He was also a friend and ally of Oregon Congressman Earl Blumenauer, first elected to Congress in 1996, and currently one of the great friends of multimodal transport in the current Congress.

After his 2010 defeat, he remained active in the Minnesota community and continued to advocate for carbohydrate-based transportation programs. He attended multiple Minnesota Bicycle Summits, as well as events across the country.

So today, raise a glass to the memory of Jim Oberstar, a man who helped make Minneapolis the bike-friendly metropolis it is today.