Over at MinnPost, Peter Callaghan writes of the proposed River Balcony in Downtown St. Paul. This is a planning effort to connect Downtown St. Paul to its riverfront alongside large-scale redevelopment from the old West Publishing and County Jail sites to the west to the old Downtown Post Office being redeveloped as the Custom House to the east.

This planning effort should also push to build an extension of the Union Depot concourse to the riverfront to serve future river transportation and build a public connection between the riverfront and Lowertown.

While the idea of a front porch for Downtown St. Paul overlooking the river should be attainable, the connection to the riverfront itself is daunting – especially because of Shepard Road and the freight railroads that occupy the riverfront below the bluff. Other than a sidewalk sandwiched between Shepard Road and the river’s northern levee, there’s not a compelling reason for people to be along the waterfront between Ontario Street and Sibley Street, just down the bluff from the heart of downtown.

Yet there’s still appeal to connecting people to the water itself. Herbert Tousley IV, chief development manager for Exeter Group, is quoted by Callaghan saying, “There is a disconnect between downtown and the river. From the standpoint of people living and working downtown, it’s a huge amenity to make that connection.”

More action on the riverfront 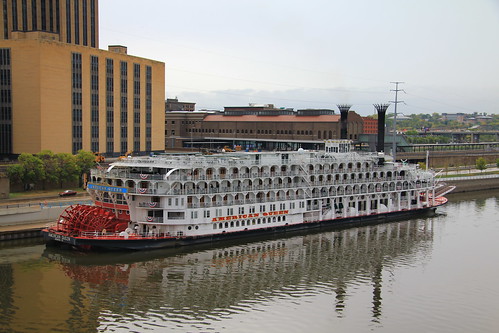 There’s even more of a reason to connect Downtown to the Riverfront if St. Paul can regain its historical role as the northern gateway for passenger travel along the Mississippi. In 2017, European cruise giant Viking River Cruises will launch a Mississippi River cruise product with the northern terminus somewhere in the St. Paul area. While officials from Stillwater and Red Wing pitch their cities’ riverfronts to Viking, St. Paul would be the natural home for a terminus with its abundant amenities and multimodal connections to the region.

With all of these changes on the horizon for St. Paul’s downtown riverfront, it’s time we take a look at another opportunity to connect people to the water: Union Depot. 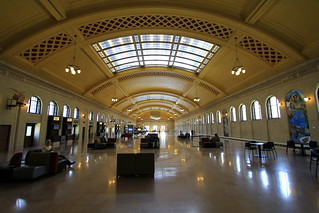 The renovated Concourse. The Mississippi is just beyond those windows at the back. Flickr / CC / Mike Hicks

Union Depot’s concourse was originally built to bring passengers across 18 passenger tracks and 9 platforms so they could get to and from waiting trains. The cavernous concourse is over 400 feet long, and extends as far today as it did when it opened in 1923. The concourse serves Amtrak, local and long distance bus service, and will someday serve additional passenger rail services.

Except for these transportation connections, the concourse is a long dead-end walk, but with great views of the riverfront as a reward at the end.

Riverfront: So close, yet so far away. Pre-renovation photo. Flickr / CC / Ramsey County

It’s less than 300 feet from the end of the existing concourse to the shore of the Mississippi River. This is a relatively trivial distance given the overall vastness of the Union Depot complex, but it’s a vital missing link. St. Paul should build an extension of the concourse across the railroad mainlines and Shepard Road to truly connect the riverfront to Lowertown and eastern Downtown St. Paul.

A new connection could serve Viking River Cruises and other river transportation providers. Passengers would have a clear and inviting welcome to Downtown, local hotels and restaurants, and frequent transit service to Downtown Minneapolis or MSP Airport. It would leverage the existing passenger amenities and infrastructure in the newly-renovated St. Paul Union Depot, potentially including waiting areas for cruise passengers as well as ticketing, luggage service, and general office space for cruise companies.

A new connection would also provide a crucial link from Downtown to the riverfront, Lower Landing Park, and the trail network that extends along the river. The link would overcome the railroad and Shepard Road as barriers between Lowertown and the River by crossing overhead, and it would overcome the barrier of the intense grade change between Kellogg Blvd and the river by providing vertical circulation.

Most importantly, it would allow us to leverage our recent $243 million investment in St. Paul Union Depot even further. It would create more of a reason for more people to pass through this beautiful facility, creating more demand for shops, restaurants, and services within the facility and in greater Lowertown.

Here’s how it could work: