Last month an organization called TRIP, in conjunction with the American Association of State Highway and Transportation Officials (AASHTO) released a report on the hazards an aging population create in our auto-based transportation system. The report, titled Keeping Baby Boomers Mobile: Preserving the Mobility and Safety of Older Americans, identifies an important problem. Unfortunately, these organizations continue to be blind to the actual cause of the problem — the misapplication of highway design standards to local streets — and thus fail to provide any coherent advice on dealing with it.

Since I’ve not run an actual post solely about the STROAD that I can link to, I’m going to have to start off this one by explaining it again. A STROAD is a street/road hybrid; the futon of transportation alternatives. It functions neither as a road that moves people quickly between two places nor as a street that provides a platform for capturing value. As such, it is the most financially unproductive type of transportation corridor that we can build; it costs a ton but financially yields very little return for the governments that must pay to maintain them.

Unfortunately, STROADS are the default design for most of our public space. Anytime you are driving on a street posted for travel speeds between 30 and 55 mph, you are almost certainly on a STROAD. From a design standpoint, a STROAD is created when we misapply to local transportation corridors the decades of wisdom we have gained from experimentation on highway design and construction techniques. In my professional opinion, it is institutionalized malpractice.

(While I had yet to start using the term “STROAD” when I gave this TEDx talk, you can get a visual sense of the difference between a road and a street — and what a hybrid looks like — by watching this video.)

STROADS are dangerous, especially for the elderly, and the TRIP/AASHTO report clearly points that out. A STROAD combines the fast moving traffic of a road with the intersections and complexity of a street. Throw in someone with reflexes and vision that just aren’t what they used to be, and you get fatality crash rates that look like this: 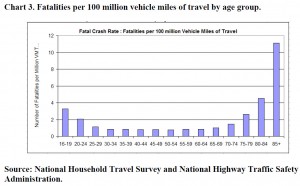 From page 18 of the TRIP/AASHTO report.

From page 18 of the TRIP/AASHTO report.It doesn’t take someone with the initials “PE” behind their name to tell you that there is a problem. The TRIP/AASHTO report points out that, “while drivers 65 and older account for eight percent of all miles driven in the nation, 17 percent of all fatal traffic crashes involved at least one driver age 65 or older.” (page 17) We’re all on the same page here: this is a major problem that, demographics suggest, is going to get worse, and we badly need sound strategies for dealing with it.

Before we get into the TRIP/AASHTO recommendations, I want to make sure that our readers understand what I mean when I say that we “misapply” highway standards to local streets. The bulk of our accumulated wisdom in auto-based transportation design comes from research and experimentation in building highways. We’ve essentially codified common practices as standards and then tweaked them over time as things were shown to work or not. It is important to understand that the bulk of this knowledge came early in the Suburban Experiment. There has been only nominal shifts in conventional wisdom over the past five decades.

Highway design rests on the concept of providing an environment where drivers can make mistakes without fatal consequences. So-called “forgiving roads” minimize the complexities of the traveling corridor by widening lanes, flattening hills, straightening curves, adding wide shoulders, installing guard rails, using turn lanes and grade-separated intersections and removing items from the the edge of the roadway to create a wide clear zone. The idea here is that, if a driver goes out of their lane or off the road, they have room to recover without creating a disaster at 70 mph.

This thinking is entirely logical when applied to highways, but it is disastrous when used on what would otherwise be local streets. Intersections are the major difference between a local street (or country road) and a highway. A highway has few and they are, preferably, grade separated (such as an overpass). A street has many. When you put an intersection every 100 feet (as we saw last year on a highway in Springfield, MO), widening travel lanes, providing shoulders and insisting on wide clear zones gives drivers a false sense of security. They feel safe and then drive faster, which is exactly the opposite of what needs to happen in such a complex environment, where the unexpected is far more likely to happen.

In the TRIP/AASHTO report, they focus in on the left hand turn across traffic being the most problematic for the elderly to make. From page 17 of their report:

Left hand turns are also more problematic for older drivers, as they must simultaneously make speed, distance, and gap judgments to enter or cross the through roadway. Older drivers generally have problems selecting appropriate gaps in oncoming traffic and estimating the speed of oncoming vehicles with respect to left turns off a mainline highway. According to a 2002 study by University of Kentucky researchers, each advancing year of age after 65 increases by eight percent the odds of getting into a crash that involves turning left.

So elderly drivers must cross lanes of fast-moving traffic and they — quite understandably — have more difficulty than the average driver (who also has difficulty, it should be noted) discerning when it is safe to go. In a Strong Towns world, the response to this problem is clear: We need to move away from the STROAD approach and start building either streets with slow-moving traffic and shared spaces OR roads that eliminate complexity (intersections) so as to move people quickly between places. This improves safety and has the added benefit of being a financially sound approach as well.

Of course, that is not what TRIP and AASHTO are suggesting. Their recommendations include increasing the “forgiving” nature of the design, specifically (page 22):

At this point it should come as no surprise that the TRIP/AASHTO report is being used in the propaganda campaign to secure more spending for transportation. While I could not find calls for more money in their report, their media efforts have certainly included that meme.

“State transportation departments are doing what they can with limited resources,” said AASHTO Executive Director John Horsley. “A long-term federal surface transportation reauthorization will give state DOTs the ability to invest in infrastructure projects to enhance safety, decrease traffic congestion, and improve the security and mobility of older Americans — who the study finds make 90% of their trips by private vehicle.”

“The growing ranks of older Americans will far outpace previous generations with their level of ability and activity. Serving their needs will require a transportation system that includes safer roads, safer vehicles, safer drivers, and improved choices,” said TRIP Executive Director Will Wilkins. “Congress can help not only older drivers, but all drivers by passing long-term federal surface transportation legislation now.”

If you are already mad about all of this, then don’t bother looking at the list of board members of TRIP and the organizations they represent. (For the record, AASHTO is made up of government officials.) I’m actually not suggesting any corruption or conspiracy here, just a lack of original thought inherent with a group of such like-minded people. It is hard to get someone to see a different perspective when their livelihood is enhanced (for now) by a continuation of the status quo.

On the positive side, I’ve had an incredible number of professional engineers email me over the past couple of years to support our work here and share their horror stories of a profession gone astray. It is a small, but growing, minority. And, of course, there are the 138,000+ people that have watched this video we made 15 months ago:

If your local paper runs the press release from the TRIP/AASHTO report, make sure and set them straight. And keep doing what you can to build strong towns.

Planning to be in L.A. for the APA conference in April? Live in the Anaheim area? Are you a fan of Strong Towns and Walt Disney? As a fundraiser for Strong Towns, we are providing a special opportunity for six people to get a “planner’s tour” of Disneyland. See the Happiest Place on Earth through the eyes of Strong Towns. Click here for more information and to register. This is going to be a really fun time.

3 thoughts on “Forgive and Forget”