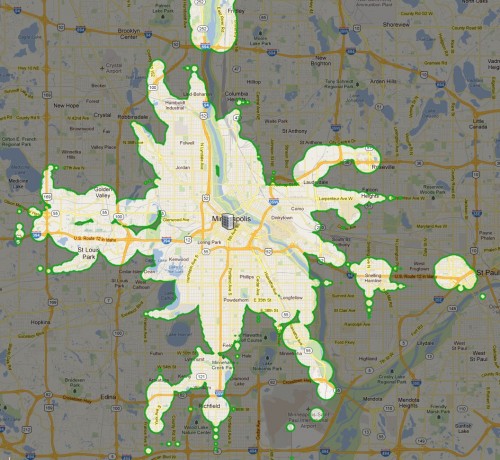 Almost all of us are guilty of living sprawling lifestyles, either now or in the past. Sprawl is a huge urban planning problem, but it’s a difficult one to handle simply because it’s so prevalent. There’s little will to change when everyone shares part of the blame, but we must find ways to do so in order to help deal with the challenge of climate change and changes in the cost and availability of energy sources.

Finding ways to deal with urban/suburban sprawl isn’t helped by the fact that it’s difficult to define in the first place. Sure, city dwellers deride the suburbs for their common cul-de-sacs and curvilinear streets, but even the scale of our central cities is pretty vast—Minneapolis itself stretches 11 miles north to south, a distance which would take 3 to 4 hours to traverse on foot. Saint Paul is almost as wide east to west. By bicycle or public transportation, that would typically take an hour to 90 minutes, about three times the average one-way travel time for a car commuter in our area.

I’m sure it happens all the time: A car commuter grows weary of his or her commute, but is confronted with a stark reality when they look up the bus journey on metrotransit.org or a mapping site—The trip will take 3 to 4 times as long as it would by car, if it can be done at all. The reaction is often to blame the bus or the train. Clearly something is wrong with the system!

Well, sort of. It’s true that public transportation can and should be sped up and expanded, but there are some inherent limits to the technology. A bus or train running at the same top speed as a car will never be able to reach the same end-to-end speed because of the number of stops made in between. The only ways to get public transportation to be competitive for end-to-end travel time is to increase the top speed, leapfrog over potential intermediate stops, and/or make extensive use of exclusive transitways to bypass congestion. Each of these has trade-offs, such as increasing expense, reducing potential ridership, and sometimes taking property through eminent domain.

Sprawl is the real reason why it’s often impractical to switch a car trip to a train, bus, or bike ride. Most of us make daily demands of our transportation networks that are illogical (and sometimes those demands are made by others upon us). If the car never came along, our cities would be much more compact. People would most likely still travel about the same amount of time each day to work, learn, or shop, but transportation through slower methods would have limited outward growth and encouraged building up rather than out.

Travelers to cities outside the U.S. often remark about how fast and efficient transit networks are in other countries, but in reality, they’re often not any faster than what we have here. In reality, they’re simply seeing the effects of a more compact geography, amplified by the fact that tourist attractions are also centrally-located a lot of the time. There isn’t just a greater population density, there’s also a greater density of places where people want to go. 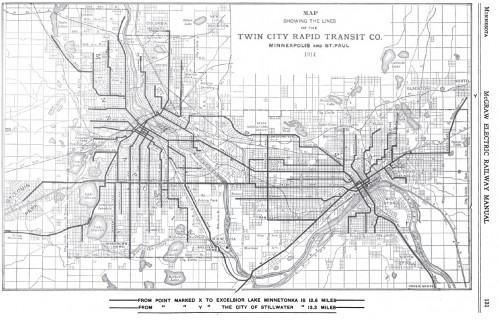 The same used to be the case here during much of the streetcar era. While the Twin City Rapid Transit system famously extended from Lake Minnetonka in the west to Stillwater in the east, the core of the system barely extended past the borders of Minneapolis and Saint Paul themselves. In an accident of history, the borders of he core cities roughly correspond with 30-minute travel times to the respective downtowns.

Now, the car is never going to go away, and many people will fight long and hard to keep their hands on the steering wheel. However, I’m convinced that they’re at or near a peak in this country and will become much less popular in future decades. Fuel prices will rise and the everlasting push for safer and more efficient cars will keep making the vehicles themselves more expensive. Along with direct costs are moral and ethical issues—externalities ranging from direct and indirect pollution from CO2 and other pollutants, altered landscapes in places like the Alberta tar sands, and violence and economic impacts on people elsewhere in the world. Changing over to renewable energy sources will help, but it’s unlikely to cover our current needs.

Moving away from car-based transportation requires us to shift our population around and change where we place businesses, schools, and other amenities. In the Twin Cities, these shifts almost certainly have to be toward the core of our region, because Minneapolis and Saint Paul themselves are much more walkable, bikeable, and transitable than anywhere else, and that’s where the existing and future investments are most sustainable. 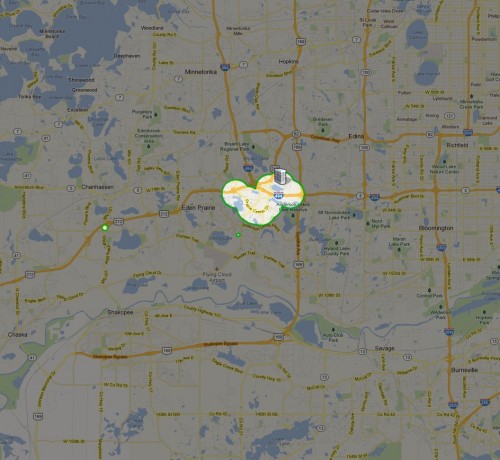 Some suburbs will certainly see improved transit mobility in the future, but job and population centers are so dispersed that a transit system that attempted to serve all of them would probably collapse under its own weight. Some communities are going to have to get by with minimal transit access and instead build more exclusively around the idea of getting around on foot and by bike. Pick a spot and turn it into a real town center.

We’re going to go through a Big Crunch as car ownership rates decline and more people seek out transit-rich environments that have jobs and the amenities of daily life in close proximity. The population won’t tolerate trip times tripling or quadrupling in length, so communities out on the edge must plan to become denser and more connected, or they’ll be left behind as populations move elsewhere.

5 thoughts on “Sprawl and the Big Crunch”