Paul Anderson, Pavithra Parthasarathi, and I recently completed a study looking at the accessibility impact of alternative land use and network scenarios for the Twin Cities. The full report is 767 pages! Most is Appendix, with maps of each scenario. The text is only 25 pages, including main figures. This post, drawn from the report, summarizes what we did and key findings.

Transportation and land use are inter-dependent. The relationship between these two has been used to explain the growth patterns of cities, and continues to be influential in the decisions by businesses and individuals of where to locate in a city. Understanding this relationship is also important for planning future growth. Land use plans and transportation plans are typically conducted independent of each other, but the two need to be compatible if the goals of both are to be realized.

Transportation planning has traditionally focused on improving mobility and reliability measures of congestion across a metropolitan area. While policy based on these criteria can improve access to jobs or labor, there are other effects that result from this policy choice. First, mobility improvements, when this means improving the connectivity of outlying areas, tend to shape land use by encouraging decentralization. Second, focusing efforts only on reducing congestion is an automobile-centric policy that ignores and often reduces accessibility for people using other modes. Finally, congestion may not matter much as once thought. Accessibility increased across the Twin Cities metropolitan area from 1995 to 2005 even as traffic congestion worsened by most network measures.

This study analyzes the accessibility of 60 different scenarios, representing each combination of 6 land use scenarios and 10 networks. They are as follows. 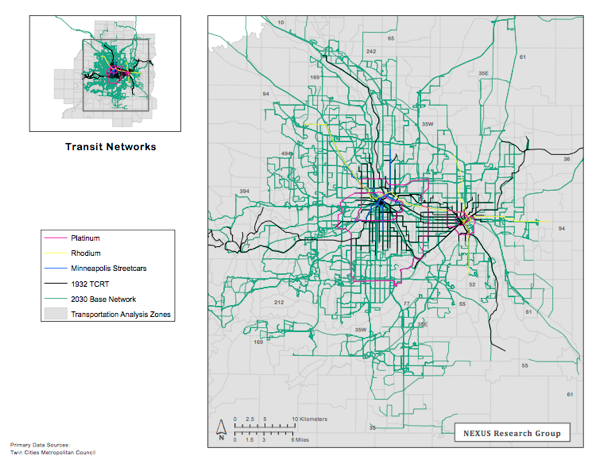 Compared to the forecast scenario, LCC produces about 20 to 25 percent more accessibility, depending on the network configuration.

Comparing networks, the freeflow network (N0) has the highest accessibility, followed by the Diamond Lane network (N4) (which has freeflow times on the freeway system inside the Beltway) (excluding the cost of tolls). The freeflow network (N0) has about 20 percent more accessibility than forecast network (N2). So if some technology could bring about freeflow travel, we would expect accessibility to be about 20 percent higher in peak. It is even greater for shorter time thresholds (i.e. the number of jobs that can be reached in 20 minutes increases more than 20 percent). The Diamond Lane network, which has freeflow times on freeways has about two-thirds as much gain as N0 compared to N2.

The anticipated 2030 network (N2) generally bests the existing 2010 network (N1) except when there is centralized population and centralized employment (LCC), but the two are very similar. Remember while the trip generation is the same across networks, the trip distribution is not, and depends on congestion levels. So adding to capacity in some areas will re-distribute demand and reroute traffic and thus shift congestion. While there may be a net reduction in congestion (this is
not guaranteed), the change in congestion will make some places more accessible and others less. The model nets this out and solves for the equilibrium. It turns out adding capacity in some places reduces accessibility to others. The added capacity in general adds about about 2 percent to 20 minute accessibility to jobs and 1 percent to 30 minute regional accessibility to jobs.

The congestion pricing scenario is similar to the Diamond Lane network, as person-weighed accessibility falls within +- 3 percent for all land uses. Congestion pricing is more effective than diamond lanes for 2010 and centralized land uses. This model accounts for the spatial benefits of tolling in terms of reallocating traffic to better routes, and some redistribution of traffic to different destinations, but does not fully account for time of day shifts, as the trip generation (by time of day) is fixed.

Transit accessibility is about twice as high in the centralized LCC vs decentralized LDD scenarios, indicating transit works significantly better at connecting people to jobs at higher densities.

At first glance, it would be easy to pick out the combination of land use and network with the highest accessibility and select that as the planning goal. Although the combination of centralized population and employment on a freeflow network might be ideal, it is likely not cost-effective or feasible under current technologies. Trying to achieve this combination would mean working against both the trends of increasing congestion (due to population growth) and decentralization of population and employment. Instead, the best use of these results are the comparisons that can be made.

First, a change in land use is more effective than the anticipated changes in the network, though moving to a freeflow network (through technological change or through pricing) would have significant time accessibility improvements (20 percent) though clearly at some monetary cost. Earlier studies came to the conclusion that network changes have a more local effect while land use changes have a regional effect. That is confirmed here, and one of the strongest arguments in favor of this conclusion is a comparison between the centralized population /decentralized employment and the decentralized population / centralized employment scenarios. The Twin Cities have highway and transit networks that were designed to serve a decentralized population commuting to centralized employment, and yet reversing this land use trend has higher accessibility, as it can make use of under-utilized capacity in the off-peak direction. This is not so surprising on the highway networks, as they work just as well for reverse commutes, but is interesting to see for the transit network as they are still designed to bring commuters into downtown.

Another observation is that there is much more differentiation between highway scenarios than between transit scenarios. On one hand, this reflects that the current highway network is congested during peak periods and some of the scenarios presented here (freeflow and congestion pricing, especially) dramatically increase speeds on the network. On the other hand, the clustering of transit results suggests that low transit accessibility is primarily caused by low transit speeds and not by a lack of transit coverage. The fact that the scenario that most expands service area, the 2030 base, has the lowest elasticity supports this claim.

The results of this study show that accessibility measures are a viable tool for comparing planning scenarios. With a selection of possible scenarios as broad as this one, it would be difficult to select one as the best choice to implement without knowing more about the cost and feasibility of each option. If the trend of decentralized development is too difficult to reverse, an investment in congestion pricing or HOT lanes might be best. On the other hand, decentralized development renders the transit system ineffective and reduces the effectiveness of the highway system in connecting people to jobs. A concentrated effort for higher densities and infill development in the central cities would benefit accessibility the most, and this study shows that increasing the centralization of population is more important than centralizing additional employment. A good use for this type of analysis would be to prioritize investments and land use strategies based on how “accessibility-effective” they are, or how much accessibility per unit dollar of investment they deliver. In determining final investment and planning strategies, the value of accessibility to jobs or labor needs to be traded off against other values. 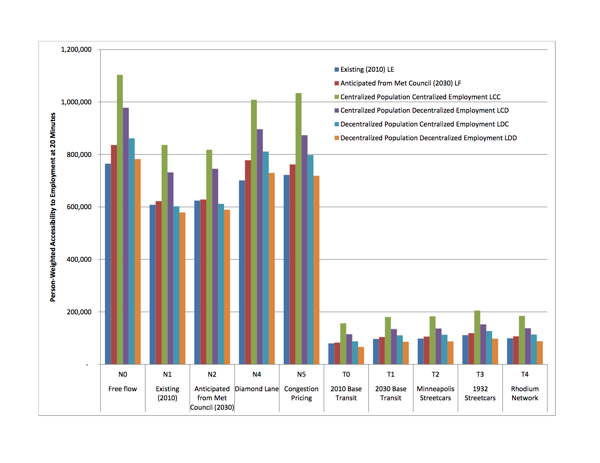