Golf is a humbling game, especially when you lose to a 98 year old. 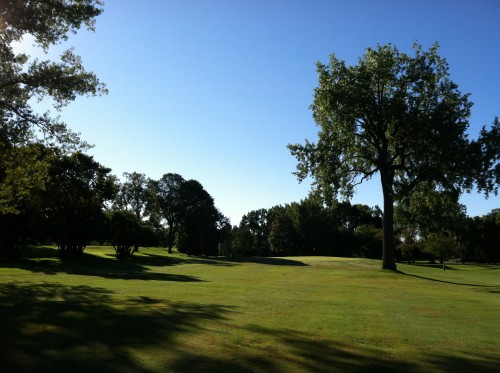 [Above: The menacing 2nd hole at the Highland 9 in St. Paul. I bogeyed, which is good for me]

Public golf courses are in the red. For that matter, golf courses in general. There is even dispute going on right now in Eagan about developing the suburb’s last golf course. There’s been a death threat over it.

Word on the street is that in the past decade, St. Paul has gone from turning a healthy profit on their public courses to trying to figure out what they’re going to do with all of them. It’s hard to pin-point what exactly is going on. While some sources claim the popularity of golf hasn’t been waning, others are indicating that younger generations don’t care about golf or are too busy (as described in Bill Lindeke’s post The End of Golf Course Urbanism?). Now, take macro-trends of entertainment preferences and combine them with increased costs, a stagnating economy and more cost-conscious consumers.

To investigate, I took a crack at the Highland 9, a supposedly easy 9-hole golf course in St. Paul. I booked an early morning tee-time online the night before, set my alarm, woke up at an unreasonable hour and then joined a twosome of two older golfers. Their names were Bill and Ted, and we embarked upon an excellent adventure sometime around 7:50am.

My much more experienced partners in golf hit up the Highland 9 twice a week, every Monday and Friday. They have the good-natured attitude you’d expect from two guys who have been golfing longer than I’ve been alive, with their jovial attitudes being coupled with a healthy dose of Midwestern humility and an elevated level of self-deprecation.

Ted would drop a 50 yard chip shot a mere five feet from the pin, shake his head and say, “Well, we aren’t getting any of the good breaks today”. Meanwhile, I’m two over and pulling out my hair from the sand trap. Bill, who is 98 years old by the way, would bogey on a par 4 while politely commenting that his putt was a little off today. I’m thinking, “You’re 98, in decent shape and still golfing! That’s incredible!”

Golf is a humbling sport – especially when you lose to a 98 year old (but only by about two shots). It was a shot to my ego, but I had fun. Everything about my golf outing was positive, minus the scorecard, and while teaming up with Bill and Ted didn’t change this urban planners mind on golf courses as a land use pattern, it did allowed me to empathize a great deal more.

While walking the course, my thoughts kept coming back to this notion of golf as a dwindling sport. I couldn’t help but juggle around Bill’s ideas from The End of Golf Course Urbanism:

“Perhaps another reason is that people are slowly abandoning the golf course as an imagined landscape. … Early suburbs were often built on conjunction with golf courses. In places like Kansas City’s Country Club District, or right here in Edina, the suburban home, the automobile, and the membership at the golf club were seamlessly integrated with each other. Golf and suburban living were all part of a single lifestyle.”

The golf course is the staple of suburbia, from the green lawns to the miniature cars. It’s the blend of it all. And, to top it off, these courses cost the city taxpayers, are environmentally insensitive, use gallons upon gallons of drinkable water, and often times, take up prime parcels of real estate that could otherwise be generating some revenue.

At the same time, I can’t help but think it’d be impossible to pull the rug out from underneath people, like Bill and Ted, who live in the neighborhood, golf in the neighborhood and just love the game. I kept asking myself, what is the cultural value? I don’t know if there is an answer. Maybe we’ll hit a point where we’ll have to close them down or sell them to a private company, or, like Eagan, develop the land. I imagine the course in Highland Park would sell quickly, but that’s not likely to happen anytime soon (although it might in places like Florida and Arizona).

In the meantime, I’m okay subsidizing the public course with modest green fees; and that’s coming from someone who doesn’t golf, and when he does golf, loses to a 98 year old.

*Bill and Ted are excellent guys and I’d like to thank them for putting up with my wayward drives, hazardous chip shots and numerous utterances of profanity.

4 thoughts on “Golfing in the City of St. Paul”