Would it be possible to close the bus turnaround at the 38th Street Station? The clear upside is it would free up a big chunk of asphalt for development. Assembling the Metro Transit and Cardinal Bar sites with the single-family homes along 29th Avenue would create a contiguous site of at least 1.75 acres. That is a recipe for a nice mixed-use development that would be very transit-friendly and support perhaps 100 homes and even a grocery store.

Take a look at the map above to see what I mean. At far right is Hiawatha Avenue, and to its west is the 38th Street light rail station, followed by the bus turnaround, the Cardinal Bar (Tavern), and six single-family homes. North of those is the Station 38 apartments under construction (they are now complete). Running along the bottom of the map is 38th Street, with its huge entrance to the bus turnaround.

I realize there are three problems with this plan, and they are where to put bus stops, are the single-family home owners on 29th Avenue ready to sell, and what about the Cardinal Bar?

My solution for the first issue is to simply put the bus stops on 38th Street. Currently there is generally enough space to accommodate buses on-street, immediately west of the rail tracks. What is interesting about this is it can shorten the walk from bus to train and vice-versa. Right now the closest bus stop is 150 feet away from the closest possible train door because one must walk around the end of the platform. A bus stopped on 38th Street just west of the tracks provides a 125-foot walk to the closest train door, and even crossing 38th Street is only slightly farther. (I note that the crosswalk across the bus entrance from 38th Street is 80 feet wide. Doesn’t that seem excessive? Simply removing that 80-foot gap would make the area more pedestrian-friendly.)

Moreover, putting the buses on the street and surrounding the street with good development provides a chance for a shared-space type of situation where the streetscaping gets a high level of treatment. Curbs can be replaced by bollards, decorative bus shelters and benches can complement streetlamps and public art. I propose that the section of 38th Street between the light rail tracks and the stoplight immediately to the west be a car-free zone, buses only, for certain phases of the traffic light. This would enable people transferring between bus and rail to be safer (in theory). I’ve observed people already cross 38th without a crosswalk anyway (see photo below), so in a way, this portion of the street is already used as a shared space. Let’s just make it official and much more attractive while increasing its utility as a bus stop. 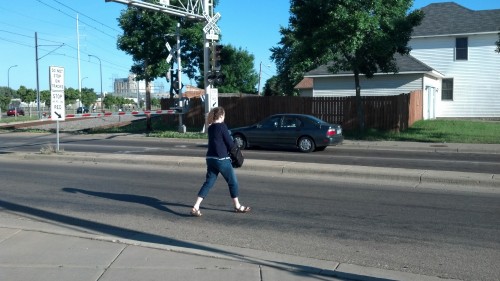 Even if we can put buses on the street, and I’m not sure we can, some of the bus routes make it tricky. Route 23 is fine, since it continues east and west along 38th Street it doesn’t need to “turn around.” Routes 14 and 22 are trickier, especially the 22 which essentially detours one block east off its route to reach the rail station. We must not underestimate the strong performance of 38th Street Station from a ridership perspective. Of the 1,500 daily boardings at 38th Street, 35% to 40% of those arrive by bus. Viewed purely as a bus stop it would be among the metro’s top 0.5%. So what to do? I’d suggest buses “turning around” simply cross Hiawatha and circle an industrial block to return to 38th Street.

We cannot dismiss the quality of bus service and those who rely on it, but one must ask what is the tradeoff? Urban design clearly suffers because of all that real estate being off limits, paved and soulless. As well, there is taxable real estate value missing when it cannot be developed to a higher and better use. Lastly, if bus riders were reduced, how many rail riders could be picked up simply by adding 100 or 200 housing units adjacent to the station? Based on ridership of other TODs nearby, as many as half or more of apartment dwellers near light rail use it regularly, so you do the math.

What about the Cardinal Bar and single-family homes on the block? This is a private market decision. By no means do I want to see The Cardinal disappear (excellent burgers and one of the great old-school Minneapolis taverns), but if a developer comes along and they can agree on a relocation plan, that it called the free market at work. Same goes for the single-family homes. In fact, when Klodt developed the successful 64-unit Station 38 apartments immediately adjacent to the north, they bought one of the homes. It is entirely reasonable for a developer to negotiate with the other six homeowners and purchase them.

The bottom line is this: large bus turnarounds, while great for riders transferring to rail, are not good for placemaking. Look no further than the nearly-completed and innovative Oaks Station Place project one stop to the south at 46th Street station. The 104-unit building literally bridges over the entrance to the bus turnaround. A colleague of mine points out it is making the best of a lousy situation, the point being if would be better to not consume the best TOD site by acres of bus turnaround. And even now as Oaks Station Place is nearly done, viewed from the light rail platform even that four-story attractive building is still dwarfed by the huge bus turnaround. The 38th Street station area is the same way. If we can creatively put the bus stops out on 38th Street, beautify the public realm, and assemble an almost 2-acre site, the results could be really sweet.