The City of Minneapolis is promising to spend a lot of money on some critical pieces of downtown infrastructure. The new Vikings Stadium and Downtown East area, Peavey Plaza, Nicollet Mall all are being considered for major capital investments. With Nicollet Mall, take one look at the people using the street and you can see that maybe the answer doesn’t lie in fancy infrastructure and world-class designers, perhaps the key is the social realm. What’s more is it’s already happening. We need look no further than food trucks, the farmers market and the Piazza on the Mall for proof. 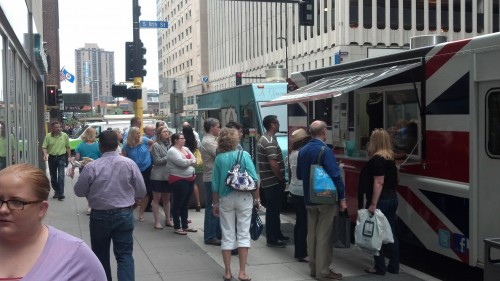 Earlier this week a Star Tribune article highlighted the tension caused by the emergence of food trucks (most of them are one block east on Marquette Avenue, but they seem to be everywhere) and the competition they pose to skyway businesses. While likely most demand for food trucks is a case of preference for new and improved lunch options (you know, capitalism, supply and demand), I truly believe a portion of it is simply that people are literally voting with their feet, and they desire to be on the sidewalks of downtown, not cooped up in the skyways on a summer’s day. Food trucks demonstrate the demand for sidewalk activity, and it is heartening to see Marquette Avenue filled with people who want to be there, not just smokers and commuters waiting for their bus. The law of supply and demand again at work but in an urban context. As an aside, what has become glaringly apparent with the advent of food trucks on Marquette Avenue is the lack of seating. It is staggering to me how recently we spent millions to reconstruct Marquette and 2nd Avenues for improved bus service but didn’t add anywhere to sit. Weird. 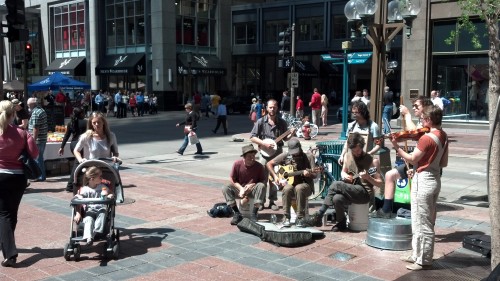 Nicollet Mall on a Thursday is quite the sight. All the people out milling about amongst the farmers market food stands and musicians busking on the street is a wonderful thing. Between that and the people just sitting there or eating at a sidewalk café, things get a little crowded in places but I’ll take all that wonderful humanity and street life any day. 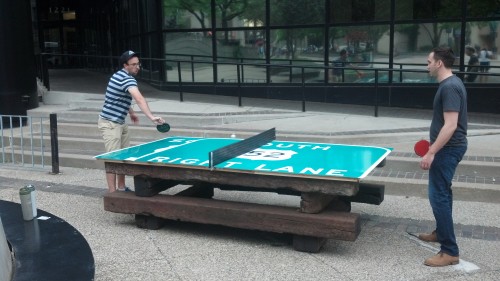 Down on the 1200 block of Nicollet, Max Musicant, founder and principal of the Musicant Group, has been working on his latest project. He has partnered with Westminster Presbyterian Church to transform the plaza in front of the office building at 1221 Nicollet in to an active and welcoming urban space. Called the Piazza on the Mall, the project has taken what was a little-used and quite large plaza (it looked good on architectural renderings) and transformed it in to a place that is used and loved. The Piazza started with, of all things, a Ping-Pong table made out of a road sign (best example of traffic calming I’ve ever seen), and now has tables and chairs, a community library and a deck (currently under construction). These are relatively inexpensive improvements but they draw people in.

Max indicates he wanted to create a place “actively projecting a ‘welcome,'” and to that end I believe he has succeeded. He points out that, while occasionally there is a crown, at any given time there may be two to 10 people hanging out, eating, reading or playing Ping-Pong. That’s a lot more than the zero people who hung out there the past couple decades, and this is an important distinction. Two guys always stop by for a game when they get off their shift at Hell’s Kitchen. People are taking ownership and showing their love for the place, adding books to the library and replacing the occasional Ping-Pong paddle that goes walkabout. People are even numbering the Ping-Pong balls, something I find to be completely precious!

What is compelling to Max is not just the people who come out at use the Piazza, but rather the people who don’t; he hears from people who say to him that they work upstairs, and while they just haven’t had the chance to stop by at lunch, they are really happy that the Piazza exists. The lesson here is twofold. The first is that real, genuine improvements to how we humans use space can be relatively inexpensive. The second is that people don’t need to use the space in order to love it; just knowing good, welcoming urbanism is there is enough.

Perhaps there is a real and genuine physical need to rebuild Nicollet Mall. But let’s not fix what isn’t broken. City of Minneapolis, don’t overthink this. Keep in mind these examples, the food trucks, farmers market and Piazza on the Mall, are some of the best things to happen to downtown Minneapolis in recent years. They are examples of a basic human need for food, interaction and a place to hang out and “be,” and they exist regardless of the type of pavement beneath their feet or style of streetlamp over their head. It seems like engaging four firms (now three) for their design ideas then selecting one at considerable cost may not provide the best return on investment when we can hire more Max’s and add a few more places to sit and get much more bang for our buck. I don’t ask much. I just want people to enjoy our city a bit more.