I go for a lot of walks around the neighborhood with my kids. My 3 year old walks at a glacial pace, so I have plenty of time to look around and notice details of the streetscape. One thing that always stands out to me is the large number of types of light fixtures being used to light public spaces within a relatively small area. I decided to take take photos of a few of them. All of the following photos were taken within a block of the intersection of Portland Avenue and Minnehaha Parkway in south Minneapolis. This is far from any kind of comprehensive list of light fixtures in use throughout the City, but I was surprised to find so many different types within one block of each other.

Most of the lights in use today on residential streets seem to be the “acorn” style, a name derived from the acorn-like shape of the globe. I found two variants of acorn-style lighting, and one of the variants came in two different heights: 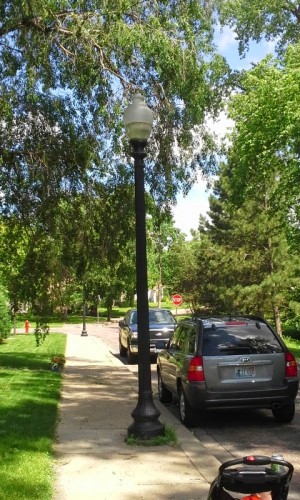 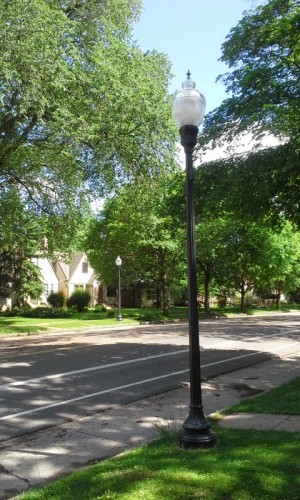 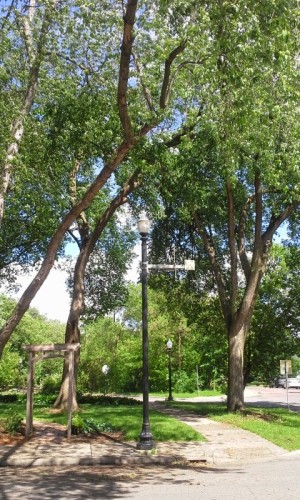 Style 1 seems to be more common throughout the city, but Style 2 is pretty prevalent as well. The differences are subtle and may not come through in the pictures, but the differences are clear with an up-close inspection.

One final version of the Acorn was one of a kind in the neighborhood. I call it the faux-acorn, since the shade is actually open air with the light directed directly down. I wonder if this is an LED light? I haven’t been back after dark to see if it gives off a noticeably different light than the other fixtures. 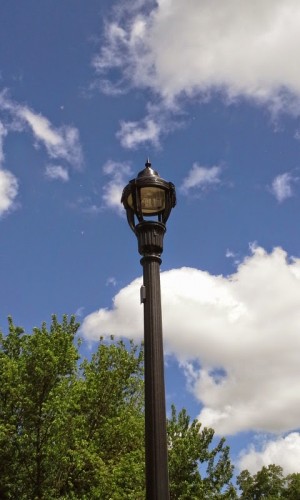 Faux-Acorn. Is this an LED?

There are also lights up and down Minnehaha Parkway that I presume were installed by the Park Board and are intentionally distinct from fixtures used by the City. Two of the styles were much taller than the third, but all appeared to be aimed at lighting the roadway. Generally, the trails are not lit. 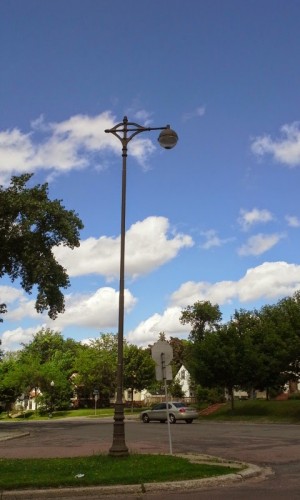 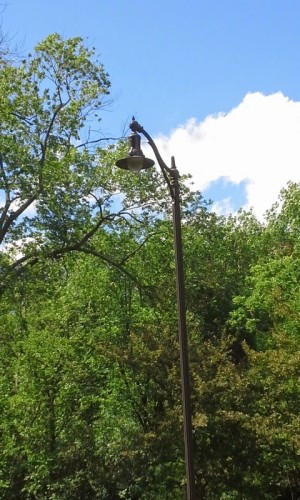 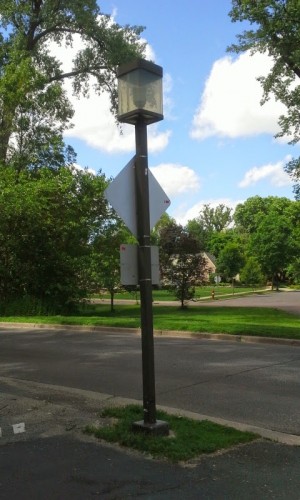 All of the lights hung on utility poles are maintained by XCel Energy. I’m not sure if they pick their own light fixtures or if the City specifies which they will use. In my neighborhood, these are mostly in the alleys, but some are on the streets as well. These lights are noticeably utilitarian in appearance. There are three different types in use in my neighborhood: 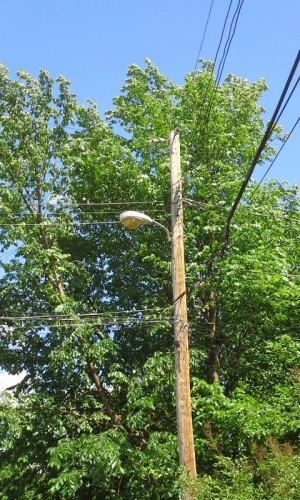 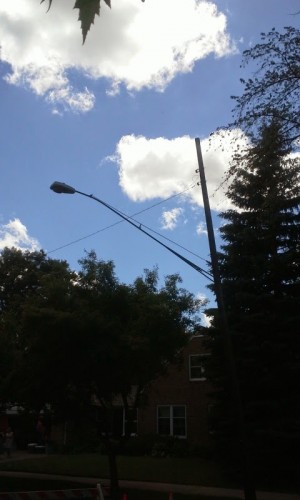 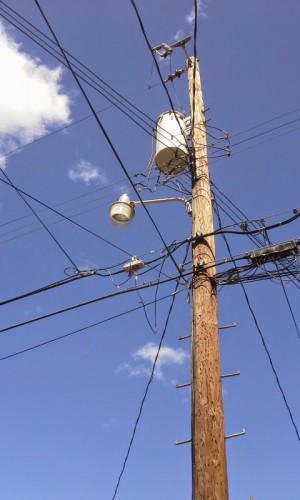 In addition, there are light fixtures included on the signal poles at the intersection of Portland Avenue and Minnehaha Parkway. These are shoe-box style fixtures – an older style that has since been replaced by something newer and sleeker. 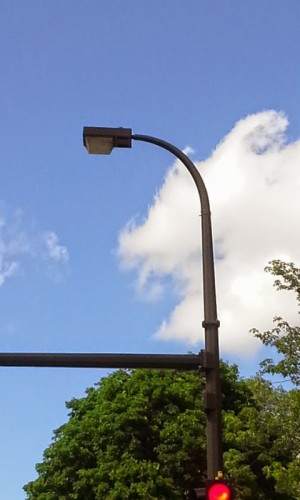 I also think it’s interesting that a number of the houses around the neighborhood have these roughly 6′ tall light fixtures in their front yards, often just a few feet from the sidewalks. They were originally gas fueled lamps, though a few of them have been converted to electricity. Most of them have been either abandoned in place or removed. 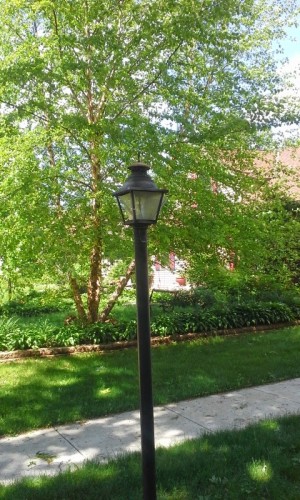 This final photo is of a standard Acorn Style 1, but it has been wrapped with what appears to be electrical tape (which is melting away). My guess is that the adjacent property owner isn’t too excited about having a streetlight in their front boulevard, so they wrapped the fixture in tape to keep the light out (or in?). Maybe it was shining through their living room window. I don’t know about Minneapolis, but in many cities, if an adjacent property owner requests it, the city will install some sort of permanent shield inside the globe to direct the light towards the street rather than towards the house. But as my father would say, there’s more than one way to skin a cat. 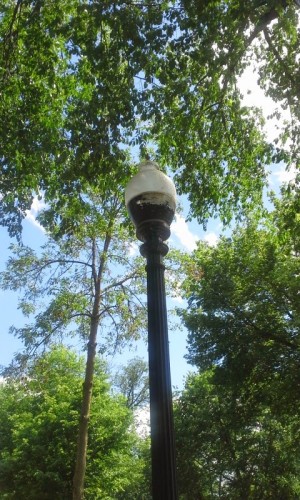 If you’re interested, you can read the full Minneapolis Street Lighting Policy, though it doesn’t dive into any technical details. It lists six different styles of lighting, though it doesn’t shed much light (see what I did there?) on how the city decides which type of fixtures end up on which streets.

I’m an engineer, so I guess I like uniformity and it drives me a little bit nuts to see so many different types of lights in use within such a short distance of each other. The reasons for such variety are generally three-fold: 1) Each agency has their own standards, and 2) Those standards change over time. 3) Different types of lights light things differently (newsflash!).

Lighting standards are always a challenge for municipalities. Residents often feel passionate about it, and the assessments that come along with it are rarely popular. Some folks want more light to enhance safety, others want less light for “dark sky” reasons. Some folks want fewer, taller lights, while others want more frequent, shorter lights. Some folks like retro-style lights, others would like a more contemporary appearance. Sometimes heritage preservation concerns come into play. There is also discussion about whether the intent of street lighting is to light the roadway itself, or also the adjacent sidewalks. In this case, all of the roadways in the area are well-lit, but there is no lighting provided for the parkway trails. Should there be? I’m sure there are differing opinions about this.

There’s always a pressure to change the lighting standard to embrace new technologies, such as LEDs, but each new standard requires a whole new set of parts to stock and maintain, and can raise new questions about reliability. There are several well-established and reliable companies that manufacture a majority of the light fixtures we see around the Twin Cities. There are also many smaller companies, and they tend to be the companies selling the newer/sleeker/energy efficient models. As with any industry, there is some level of security in choosing parts from reliable and well-established vendors. Agencies like to minimize the number of different types of fixtures they have to maintain and the variety of different parts to keep in stock, and this is easiest when they pick one supplier and get all their parts from the same place. At the same time, agencies often come under pressure when it is perceived that they are favoring a particular manufacturer and not allowing others to compete for the city’s business. However, it has happened more than once that an agency installs light fixtures from a new start-up company, only to have them go out of business, leaving the agency with no reliable way to source parts to maintain the lights.

It is tempting to suggest that we should just pluck a few of these outdated fixtures out of the ground and install the new standard on top of the old foundation and reuse all of the existing wiring. In some cases, it’s not as simple as swapping out an old fixture for a new one. Lighting plans are usually drawn to meet the specifications of a particular fixture. For example, if the existing fixture supplies x amount of light when installed at height h, we can’t just swap the fixture out for a new style that supplies y amount of light from height j without impacting the overall lighting levels. Sometimes this isn’t a big deal, but sometimes it is.

For now, I guess I should be happy that my neighborhood has street lighting (and that the previous owners of my house fully paid the assessment that was levied against the property for it). Not everyone in every community can say the same.

14 thoughts on “Street Lights from my Neighborhood”