A topic of conversation recently has been the need for better public connections between Nicollet Mall and the downtown Minneapolis skyway system, to meld our distressingly disparate pair of pedestrian pathways into a unified urbanist utopia. Both a Minnpost article and a discussion on the forums came to the conclusion that the Nicollet Mall project’s abandonment of its originally proposed “Crystal Stair” up to the IDS/Macy’s skyway meant that we were missing out on the best chance to get a public connection we’d had since the previous redesign that proposed and abandoned public stair towers, and the best chance we’ll get until we rebuild the whole thing again, probably in the 2040s or so. They aren’t wrong. A public stairway would be a multimillion-dollar piece of infrastructure, and is unlikely to happen outside the framework of a larger project. The thing is, though there does need to be easier flow between the skyway and sidewalk, we don’t need to build a new, expensive connection. We already have a bunch of them, in buildings up and down the Mall. 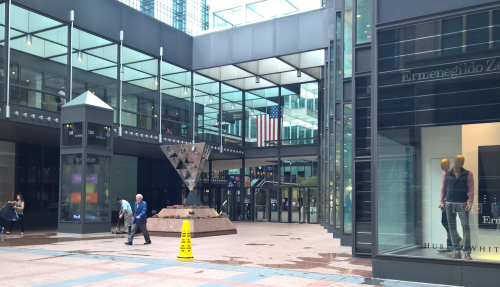 A public skyway access point, just a few yards from where everyone says we need one.

I took an moderately exhaustive tour of the skyway-connected buildings of Nicollet Mall, and graded each entrance on whether it provides a good skyway connection or not. For the purposes of this post, an entrance with a good connection is subjectively defined as one where a staircase or escalator up to the skyway level is immediately visible upon walking through the door. 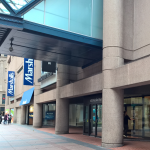 A skyway is coming out of this building. Can I get into it here? Will security glare at me?

Hence, the US Bancorp Center and IDS Center, with their bright, airy lobbies and prominently placed escalators up to obvious skyway retail, count as great connections, but 50 South Sixth, with its escalators hidden in a dimly-lit alcove behind the elevator bank, doesn’t. The Medical Arts building doesn’t provide a good connection, but City Center, everyone’s favorite bad urban design punching bag, does, as long as you can ignore the oppressive façade long enough to get through the door. Of the roughly fifteen buildings on the Mall that are connected to the skyway, seven of them have good street to skyway connections, and importantly, each block between 5th and 11th Streets has at least one.

The problem isn’t that there aren’t connections between the street and skyway; there are. The problem is that it’s hard to find them without already knowing where they are, which puts newcomers in a bit of a pickle. Luckily, as with so many of our urban design issues, we can look to another city that’s solved this exact problem, and shamelessly copy their solution. Surprisingly, the city in question isn’t even (either) Portland.

Like Minneapolis, Des Moines, Iowa has an extensive skywalk system that connects just about every building in the central business district, with tendrils reaching out of the core to hit sports facilities and parking ramps and the like. Unlike Minneapolis, there are ubiquitous red circle signs at just about every building entrance (and matching signage up on the skywalk level), letting newcomers know exactly where (and when) they can get in or out of that climate-controlled maze they see above. 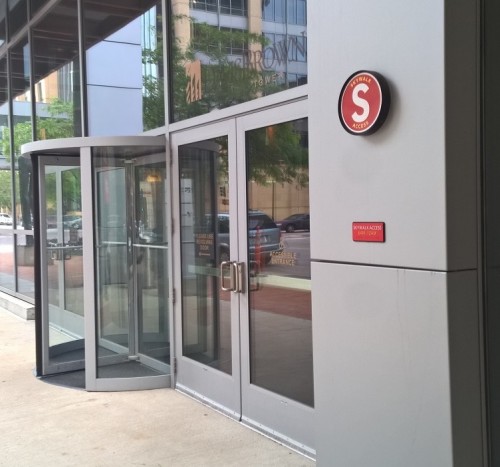 Can I get into the Skywalk here? I sure can!

As a visitor there recently, I walked the length of downtown Des Moines in the skywalk system, and, while I occasionally took a wrong turn, I never had that unsettling feeling of not knowing where I’d be able to get out of or back into the system. It was pretty cool.

Obviously, someone would need to pay for these signs. I suspect that the Des Moines skywalks are city-owned, like the skyways in St. Paul, so the city most likely pays for them. Since the skyways in Minneapolis are privately owned, it would maybe make more sense for such signs to be funded by some sort of business association with a vested interest in downtown visitors. I don’t really know how much these signs would cost, but let’s wing it and say that they cost $850 each installed. The stair/elevator tower at Central Station in St. Paul cost $1.7 million, which would buy 1,000 skyway access signs, and 1,000 more sidewalk access signs for the corridors inside. Such an investment wouldn’t create a single-point connection in front of Macy’s, but would cover the entirety of downtown, with a bunch left over to give to St. Paul. If we want to start cautiously, and just do the 15 to 20 entrances on Nicollet Mall itself, we’d be looking at about $30,000. As far as public realm improvements go, that’s about two curb extensions. If we as a city want people besides downtown regulars to use the skyways (up for debate, I know), a solution like this is almost too cheap not to do.