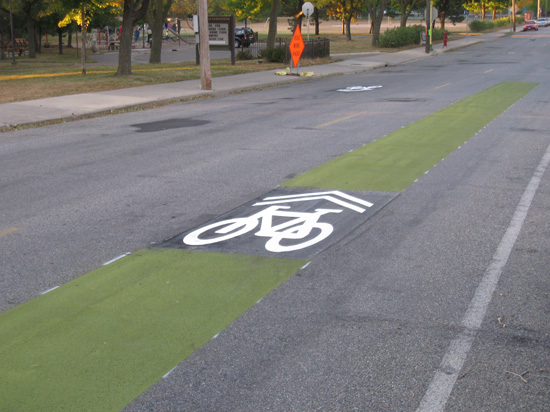 I prepared some materials explaining how shared lane markings don’t change any of the expectations for how drivers or cyclists should use the roadway. I explained that the primary function of sharrows is to convince drivers and cyclists to exhibit the behavior that is already expected of them. And that the FHWA has published results confirming that shared lane markings are effective at accomplishing this objective.

This all begins to make the traffic engineer in me a little uncomfortable. It feels like we’re using pavement markings as an educational tool. If the markings aren’t necessary (in the sense that they have no regulatory purpose), then perhaps they aren’t necessary? If the purpose of the marking is to encourage better behavior, maybe an educational program is a better solution? This is similar to how traffic engineers have given up on enforcing stop sign warrants, and now we have unwarranted stop signs all over the place just to try and encourage people to exhibit better behavior (i.e. slow down).

Other types of signs and markings that don’t serve a regulatory purpose are more or less being phased out. For example,  you don’t see too many new “deer crossing” signs going up anymore. Instead we just expect motorists (and cyclists, I guess…) to always be aware that deer may jump in front of them. I recognize that a similar argument could be made for, say, crosswalks, and you won’t find me making this argument any time soon.

However, back to the point of this post – I think the Bryant Avenue shared lane markings do a great job functioning as an educational tool. Bryant Avenue is an excellent place for inexperienced cyclists to learn how to ‘take the lane’ because of the relatively low traffic volumes, and moderate parking turnover rates.

What do you think, readers? Are you comfortable with the idea of using pavement markings for educational (rather than regulatory) purposes?