Anyone who hasn’t been to New York City in the last few years will immediately notice a few changes to the urban landscape. Most obviously, Broadway Avenue, New York’s “main street,” has a whole new look and feel around Midtown Manhattan. The Bloomberg Administration, let by his transportation Commissioner, has transformed Broadway into a decent pedestrian landscape. They accomplished the feat by removing a lanes of auto traffic and replacing them with sidewalk café accoutrements. That alone should seem astounding to anyone who remembers what the street what it was like before. There is  also a whole new network of bicycle lanes, and a new bicycle sharing system is set to launch this summer.

Along the new pedestrian friendly Broadway Avenue, near Columbus Circle.

While some of the  changes that have taken place in New York City under Bloomberg have problematic neoliberal class ramifications [1], the actual process by which the Broadway re-design took place represents an intriguing new way of implementing changes to the built environment. Instead of an expensive, grand plan involving large-scale public investment and heavy machinery, the New York City initially transformed Broadway through a series of small gestures, describing the changes to the public as part of a trial, or an experiment [2]. At first, the city used only the bare minimum of infrastructure – just a few concrete barriers and some moveable furniture – to demarcate and reconfigure the street. After receiving largely positive feedback from the business community and many users along Broadway, Transportation Commissioner Sadik-Kahn officially made the redesign permanent.

The Broadway redesign, at least in its initial stages, shares a common approach with parallel trends in artistic and architectural attempts to transform public space. For example, the Broadway re-design mimics at a larger scale the successful Park(ing) Day movement, where parking spots are temporarily “reclaimed” for the public realm, transformed through a few key elements into public space, parks, theater, and many other creative ideas. The initial stages of the Broadway redesign displayed a similar simple elegance. By moving a few concrete planters and sprinkling places like Times Square with a few chairs, the city created a dynamic new public space with laughably minimal investment.

Particularly in an era of economic hardship, when every level of government seems to be struggling with deep and consistent budget problems, temporary, experimental, and short-term projects are becoming more commonplace. Other examples come from Baltimore and the Twin Cities, where “pop-up urbanism” has become a new way of describing short-term leases on empty storefronts that are consciously created as experimental (and even playful) ways to approach economic revitalization. Yet another example are the “Sunday Streets” or cyclovia events taking place in increasing numbers of US cities, where streets are temporarily closed to traffic and given over to a variety of public uses such as cycling, exercise, play, or old fashioned strolling.

There are downsides to these experimental urbanist approaches. For example, the pedestrian spaces along the new Broadway Avenue are hardly aesthetically appealing. Compared to a classic public square from an older European city, or even a compared to a newer public space that was built deliberately from scratch, the street lacks the kinds of detail and amenities that have long been the staples of good placemaking. Instead, the new Broadway still feels like a street for cars, almost eerie in their absence. 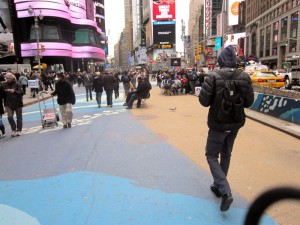 Yet, at the same time, perhaps experimental urbanism can begin to address some of the longer-term challenges that have plagued urban planning since the days of Robert Moses. By crafting changes to the built environment as experiments, urban design begins to seem like a more playful realm. Streets become alive with new possibilities that, because they’re short term, don’t carry with them the large institutional overhead that has long plagued the slow-moving, top-down apparatus of traditional city planning. As the example of flash mob advertising suggests, these new approaches that I’m terming “experimental urbanism” are certainly not immune to commodification by capital and state power. But perhaps experimental urbanism, by opening up possibilities for public space, can broaden the range of conversations taking place about our cities and streets. The example of Broadway proves that, given the right political and economic circumstances, changes that seemed unimaginable may be possible.

Pedestrians in the new Times Square.