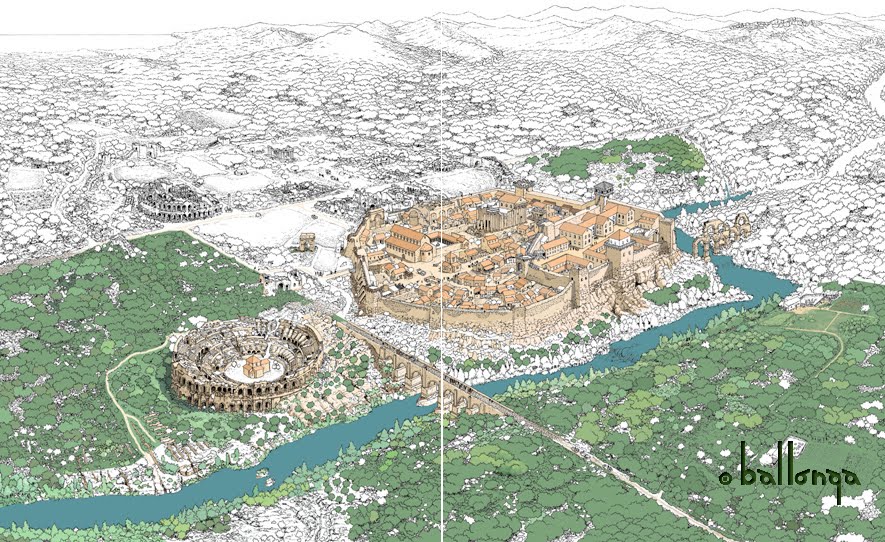 My interest in cities was kindled in my youth by a series of books primarily written by a professor at the University of Barcelona, Xavier Hernandez, and primarily illustrated by Jordi Ballonga, “a specialist in the illustration of urban subjects”.  Barmi and Lebek tell the story of two cities in southern and northern Europe respectively from their founding to the present (well, the late 20th century anyway).  Measuring a good 9″x12″, the books depict every phase in the development of these cities in an amazingly detailed birds-eye perspective splashed over two pages.  You will never see Barmi and Lebek on an e-reader. 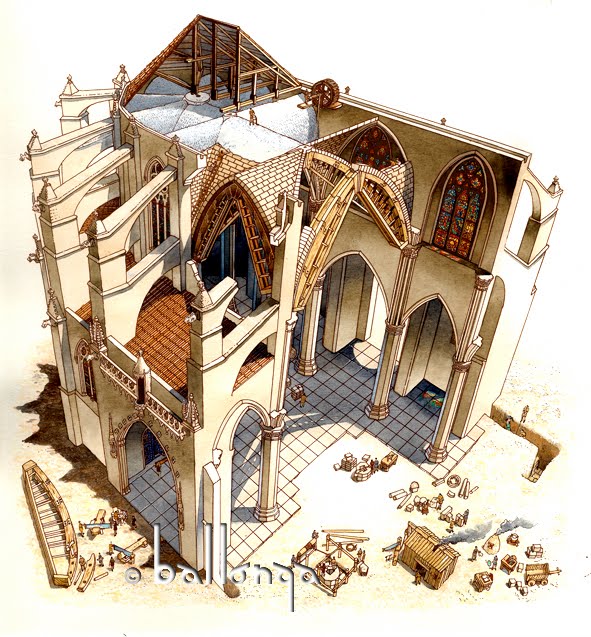 As a child, I spent hours following the two cities on their journeys through time, with each era illustrated in such incredible detail that I seemed to never run out of new unnoticed details.  (Reopening the books many years later, I see that I apparently added my own details in the form of pencil-marked walls or buildings in places.)  Perhaps less linger-worthy but no less fascinating were the pages between the birds-eyes, which gave a narrative history of the era depicted and had detailed cut-away drawings of specific buildings or infrastructure, such as cathedrals, skyscrapers, or subways.

Barmi was the first book I got, and today it is the most yellow, worn and pencil-marked.  Sometime later I got Lebek, but I never was able to find the third book in the series, San Rafael, which tells the story of a fictional city somewhere “in the region that lies south of Mexico’s Yucatan Peninsula and north of Guatemala’s Sierra de las Minas, an area that includes the Mexican state of Chiapas, Guatemala’s central region, southern Belize, and western Honduras.”  Finally I got around to digging in the children’s nonfiction stacks at the Minneapolis Central Library, where San Rafael lay waiting for me after all these years.

Uaxacmal thrives in the 4th century

While the Central American city obviously represents a history far removed from those of the earlier two books, it has the same familiar format, including the gorgeous two-page birds-eyes alternating with narrative history and details of certain buildings.  San Rafael’s story begins in 1000 BC, when a small village of corn farmers cut into the jungle on the banks of a large river, and continues through the late 20th century, by which time the small village has been replaced by a sprawling metropolis centered on a Spanish colonial center and a cultural park of preserved Mayan ruins and ringed by factories, housing projects and slums.

The writing in San Rafael is concise and unadorned enough to avoid overwhelming younger readers, but not too dumbed-down or simplistic for adults (at least this adult) to enjoy.  Hernandez doesn’t shy away from more complex topics such as class conflict or religious persecution, but perhaps could have spent a bit more time on them.  But it’s not surprising that the focus is on the physical characteristics of the city that are so brilliantly depicted by Ballonga (with the assistance of Josep Escofet for this venture).

"The game of pelota has fascinated Central America's diverse peoples for centuries."

The depictions of Mayan life are probably the most interesting parts of the book to me as a result of my unfamiliarity with the topic, and so the lack of a bibliography is probably the most obnoxious intrusion of the characteristics of children’s literature.  Scenes of villagers in the act of constructing the famous pyramidal temples – “Stonemasons squared blocks with hammers fashioned from stone.” – will excite any adult with even a remnant of imagination.  The stimulating scenes continue through the Spanish military colonization and the American corporate colonization – I just can’t emphasize enough what a jewel this book – as well as the previous two – is to anyone with an interest in cities or history or human culture or life itself.

In the course of writing this blog post, I’ve found a fourth book in the series – Umm El Madayan, which apparently depicts a North African city and is not primarily written by Xavier Hernandez or illustrated by Jordi Ballonga.  Now if you’ll excuse me, I have to get to the library to check that book out.  I promise to read it quickly – I don’t want to interfere with any younger readers who may stumble upon it, kindling their imagination and stoking a lifelong love of cities.

Cross-posted to my blog, gettingaroundmpls.wordpress.com