We subsidize transit to spur development.

We cannot make up our minds whether we want development to drive transit use, or we want transit use to increase development. Advocates would say we want both to create transit-served high density communities because of all the good that it brings.

But if the transportation-land use cross-dependency is so strong, why do we need to subsidize both sides of the equation? If you subsidized transit to get the positive externalities which are beneficial to development, it might make sense (e.g. maybe transit is undersupplied because the private sector cannot capture the positive externalities due to transaction costs and prohibitions on value capture). If even after subsidizing transit, and there is still not enough demand for private development to proceed without subsidy, maybe you are trying to stimulate development in the wrong place. 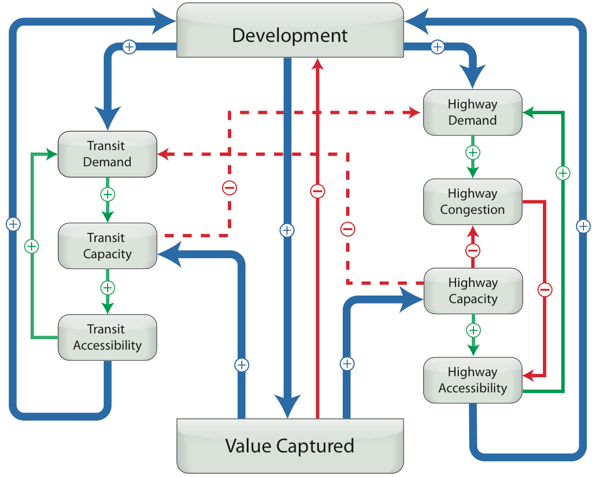 What positive eternality is the private sector development producing which justifies subsidy? The best I can figure is transit ridership. (Which isn’t really a positive externality, but might lower the average cost of transit, which is often dominated by high fixed costs, and slightly reduce the negative externalities of other modes.) And we want transit riders and service to justify private development?

I believe that the transportation-land use system acts as a positive feedback system (but a self-limiting one), in the high growth phase of development, transportation investment does drive land development, and land development can induce construction of infrastructure. We have saturated this effect in many places, so the effects of additional accessibility are now quite small on mature networks. The marginal benefits of new infrastructure may no longer outweigh the marginal costs.

The beauty of a positive feedback system is that it takes off on its own, without interference. The subsidy is an indicator the economics of the positive feedback system are not there. The evidence is that there were such effects historically, see the Special Issue of JTLU on the Coevolution of Transport and Land Use for examples, as well as papers cited therein.

Advocates would again say: but you need to prime the pump. To which I respond, we have primed the pump for almost 40 years in the US, with a large share federal capital surface transportation funds going to transit systems that now collectively serve 1.5 percent of all person trips (according to summaries of the NHTS by Polzin and Chu).

This is not to say any transportation subsidies are inherently justified or unjustified. (That is for another post). It is just to point out that there has been massive transit investment over a period of decades far out of proportion to the relative demand for transit, and that investment has done almost nothing to boost transit’s market share (or ridership), almost nothing to stimulate development, i.e. nothing to “prime the pump”. And if 40 years of sustained investment won’t do it, it seems reasonable to suppose another 40 years won’t do it either.

The reason for this is simple. Transit is not perceived as a better mode for 98.5 percent of trips than something else. It is not faster and/or it is not higher quality and/or it is not less expensive in out-of-pocket terms. It once was, before today’s competing modes had matured, before different land use patterns locked-in.

There are things we can do to make transit better. (And there are certainly things we can and should do to make other modes less attractive, like internalizing negative externalities with better pricing). I think it is technically and economically (though not politically) feasible to double (or even quadruple) transit ridership nationally. But spending scarce resources to subsidize private development to produce transit riders while we simultaneously subsidize transit service to induce private development is not the path to increase in ridership. It just gets us lost.

When transit was on the upsurge from 1880 to 1920, its competitor was walking and horse. It outperformed both. The US was growing fast, and it grew around new transit lines. But with the advent of automobility, paved roads, large lots and thus increased distances between homes, the suburbanization of retail to serve new suburban residences, and then suburbanization of employment, and then new highways to serve these new markets, those advantages withered.

Remember, the built form of the 1880s-1920s still mostly exists, and transit market share is low even there, where it could be much higher. We don’t necessarily need more development in those areas, certainly not development requiring subsidy. We need the residents and workers in those areas to want to take transit more. It already has the potential to be a decent choice, since the land use pattern was constructed with transit as the preferred mode.

We spend too much capital trying unsuccessfully to convince people with better choices to use transit. We don’t spend enough on those without good alternatives and who might travel more or farther, or those where transit is actually competitive, where the built environment still resembles transit’s glory years of the early 1920s.

Instead of requiring the public to subsidize land development near transit, transit should create value for land development that can be captured to help pay its capital costs. If a new route doesn’t create enough value to cover its costs or generate land price appreciation, maybe we should spend finite transit-supportive resources somewhere that does.