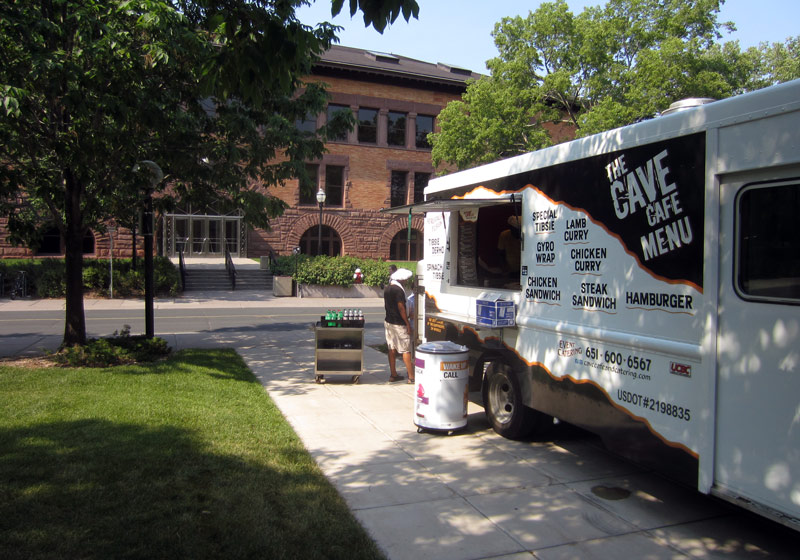 A food truck on the U of MN campus, where good food is rare as a three-toed walrus.

The Case Against Food Trucks

I was at an urban planning function a while back when someone asked me, “What do you think of food trucks?”

“They’re terrible!” he or she declared. “They suck all the business from legitimate restaurants. They’re ruining cities. Instead of opening up an actual café, people just buy one of these food trucks and park it on a corner. They don’t pay any taxes. Then they make a bunch of money, close up for the winter, and go down to Mexico. It’s ruining business for actual restaurants in actual buildings.”

It made me think. Popular as they are, the case against food trucks may be somewhat legitimate. Food trucks can and do park outside of actual brick and mortar joints that pay property taxes and fill our empty street fronts. Lots of these cafés are running on very thin margins, struggling to make a profit in our underwhelmingly people’d cities. Is it really good public policy to encourage and cultivate a bunch of mobile restaurants-on-wheels when so much of our commercial real estate sits empty? Why should a entrepreneur who has invested thousands in fixing up an old building, who pays much-needed property taxes to the city, and who serves as a custodian of the street in a hundred invisible ways be forced to compete with someone driving a CO2 spewing truck around the asphalt, tweeting like the Pied Piper? Is that fair? Is that a good policy decision? 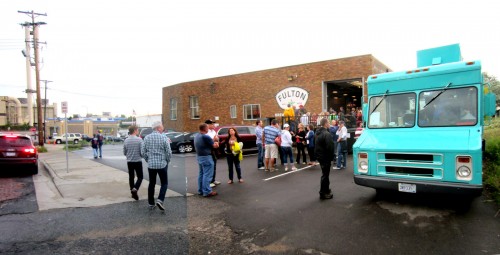 A food truck parked by the Fulton Brewery, which until recently, was outside the “designated food truck zone.” 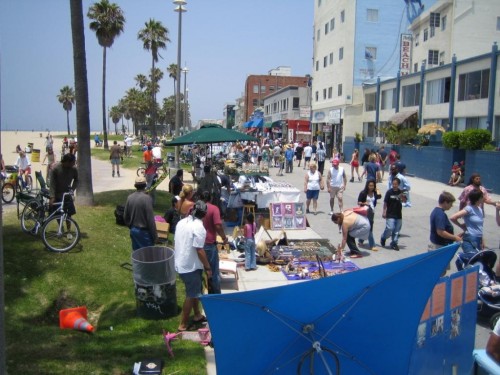 The Long-Running Battle Between Street Vendors and Shop Owners

This kind of debate is nothing new. As this wonderful hitstory of sidewalk debates points out, attempts to restrict street vending go waaaaay back into history. For example, in 1691, New York City (New Amsterdam?) prohibited selling on the streets until two hours after the official markets opened. After street vending blew up following the 19th century explosion of US cities, a whole new series of ordinances and regulations emerged to try and control the practice. The history of LA’s attempts to control push cart and sidewalk fruit vendors reads like a Tolstoy novel, replete with strikes and fees and police crackdowns and backroom deals and precise legal definitions of “fowl.” A more recent example is New York’s policing of book and magazine vendors, which was part of that city’s semi-fascist Giuliani-fueled crackdown on “quality of life” crimes.

The basic debate is not just about taxes and the maintaining buildings. There’s also a struggle over how sidewalks and public spaces should be used. Is the sidewalk primarily a space for social interaction, for eating and drinking and selling and buying and stopping and talking and sitting and sleeping and protest? Or is the sidewalk a space to move through, a means of transportation?

Throughout most of the 20th century, our society has opted for Door #2. Almost all cities have ordinances on the books that reserve the sidewalk for foot traffic, as means for getting from A to B. For example, Minneapolis Code 427.110 says:

No person shall place or suffer to be placed upon or over any sidewalk, or suspend over any street, any goods, wares or merchandise for sale, show or otherwise beyond the front line of the lot where such goods may be placed, suspended or exposed. (Unless, of course, they have a permit.)

No person shall sell or attempt to sell, or offer or cry for sale at public auction in the city any goods, chattels, wares, merchandise or personal property whatever to any person upon the sidewalks or streets; nor shall any person by ringing a bell, gong or triangle, or any loud cries, give notice of any auction or sale of any kind upon the streets or sidewalks of the city. (Unless, again, they have a permit.)

You are not allowed to “coast or side carelessly,” “play any game of ball,” “engage in any … amusement” or (as anyone who has tried to have a political protest knows) “congregate … as three (3) or more persons … to obstruct the free passage of pedestrians.”  (Don’t get me started about dancing on the street.) 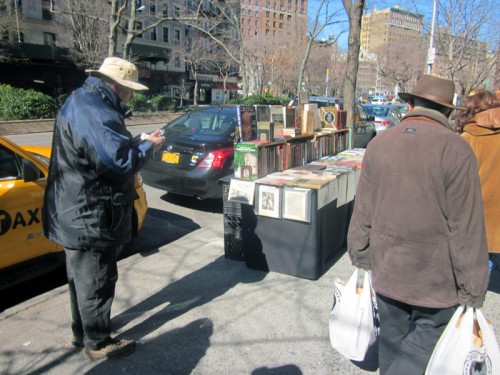 In some ways, the debate over food trucks is a remnant of this age-old fight over how our streets and sidewalks should be used. According to the modern 20th century model, commerce should take place inside proper buildings run by proper tax payers with proper signage.  Streets and sidewalks and outdoor spaces are for moving cars (and walking people) around as efficiently as possible. On other other hand, with the  the 19th century model, all sorts of things are happening on the streets. People are haggling and selling and panhandling and hanging out and playing and cars are stuck in traffic and are all kinds of things are going on.  Food trucks exist somewhere in between.

Why food trucks? Why now?

Food trucks have certainly taken Minneapolis and St Paul by storm over the last few years, their success exceeding almost everyone’s expectations. But what explains this change, happening at this moment in time? As I pointed out, it’s not like the concept of food being served from a mobile vehicle is anything new. It’s not like this is some sort of iPod innovation that revolutionizes the urban food service industry. So what explains the rocket-fueled success of the Twin Cities’ food trucks?

I can think of three possible answers. 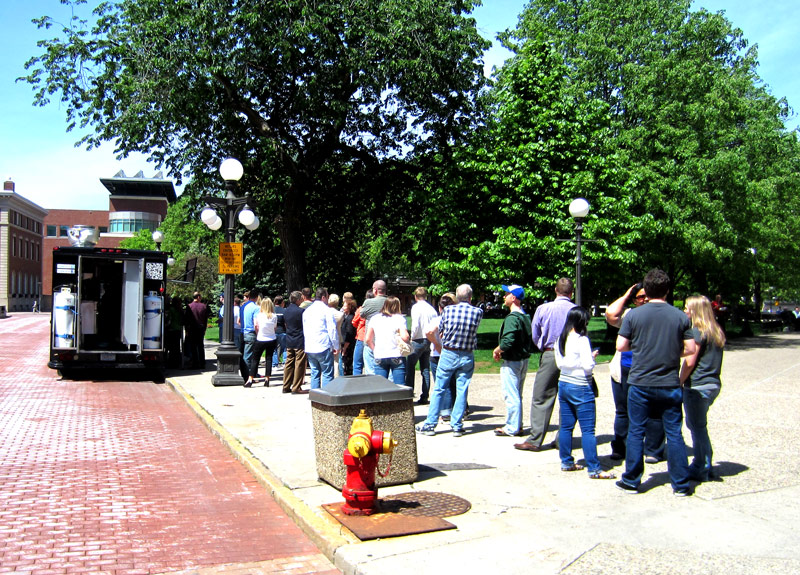 People lining up for tater tots as if they’re the last thing on Earth.

First, food trucks redress Minneapolis and St Paul’s long-standing downtown vs. neighborhood imbalance. I always feel bad for anyone attending a conference in Minneapolis and staying in a downtown hotel. Why? Because very few of the Twin Cities places I love can be found there. Compared to all the wonderful little neighborhood corners, both downtowns are giant wastelands where interesting ideas go to die. (Quick, name your top 10 bars and restaurants in the Twin Cities? How many of them are downtown?) And apart from bit around Washington Avenue or near Cedar and Riverside, the entire U of MN campus is a chained-up Sahara. Tens of thousands of hungry people are trapped there every day forced to subsist on re-heated Poppa Johns and subjected to the faux-kitcsh wall hangings at Potbelly. They subsist almost entirely on tasteless crap from a SYSCO warehouse. For any Twin Cities visitor, in order to discover anything really amazing, you must escape the the corporate core, flee downtown, and abandon campus.

Or, thanks to the magic of petroleum powered food trucks, you can have the neighborhoods come to you! A good example is the Anchor Fish and Chips, which is a delicious chippie on 13th avenue in Northeast Minneapolis. It’s great food that makes people in Northeast Minneapolis happy and fat, but nobody working downtown is going to take the time (or go get their cars, un- and re-park them) to visit Northeast for lunch. So why not have 13th Avenue come to them? It sure beats the Nicollet Mall Panera.

The same holds for the Barrio truck or the 128 Café or the Ngon Bistro. In a way, these trucks are bringing the neighborhoods of the Twin Cities into downtown. They’re mobile billboards for the diversity of restaurants that make the Twin Cities great. Food trucks improve our mediocre skyway-laden anti-places  by injecting them with old streetcar shopcorners.

Second, food trucks are new business incubators. The reason why food trucks are so immensely popular with Twin Cities’ entrepreneurs is that they require vastly less overhead. Instead of taking out huge loans to lease and fix-up a business that will be tied down to one location location location, you can invest less money into a food truck, buy some paint, and come up with a nifty low-cost internet marketing campaign. Voilà! You have a new restaurant concept. Good luck to you. 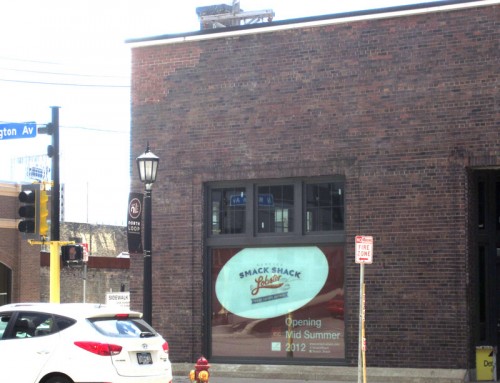 Food trucks are almost like a giant marketplace of embryonic restaurants, little incubators of future shops. Look at the diversity of trucks. Any one of them may become wildly popular and evolve into an actual bricks-and-mortar establishment. For example, the Smack Shack should be opening up their restaurant on Washington Avenue anytime now. Food trucks aren’t just competing with actual café buildings, they’re evolving into them. They’re like mini-restaurants, starter cafés, chrysalis bistros. Believers in the free market should embrace them.

Third, and most importantly, food trucks are something that takes place outside. Food trucks get people out into all the underused plazas, parks, and sidewalks of the Twin cities. They lure you into the fresh air, out of the cursed skyways and tunnels and into the bright rays of sunshine reality. They beckon you onto the picnic tables, to perch on sittable ledges, to find the shade of the maple trees. This has to be one of their chief attractions.

For too long, Minnesotans have been allowed to wallow in their agoraphobic meteorologic bubble, being scared by Sven Sundegaard and Mark Seele into thinking that it’s too cold or hot or windy or sunny or humid to open the door. We huddle in our skyways and our air-conditioning, squinting at the outside world that we are convinced will reject us like Mars in Total Recall.

Well screw that! Food trucks are the perfect excuse to liberate the be-bubbled masses. They’re a ‘Get Out of A/C Free’ card. In a way, walking to a food truck to buy an $8 taco is a subliminal excuse to break free of our climate-controlled cubes. And anything that can get people out of their buildings and their cars and into the parks, anything that can get butts perched along the riverbluff, well it’s good in my book.

Are there limits to the food truck phenomenon?

Should there be a limits to food trucks? Can they go too far? Or is there plenty of room for both trucks and bricks and mortar restaurants in the Twin Cities?

I don’t know the answer. After my visit to Portland Oregon last year, I was impressed by the huge variety of food trucks AND interesting local businesses. Maybe this is a case where urban space isn’t simply a zero sum game. Maybe the more we revitalize our public spaces, the more people enjoy spending time and money in the city, the more business there is to go around. I’d like to think that this is the kidn of addititve situation where everybody wins.

Maybe it’s a fad or maybe it’s the future. But I hope we don’t have to choose between food trucks and public spaces and having good cafés in actual buildings. Every time someone leaves the skyway system to grab lunch a  food truck on the sidewalk, the future of Minneapolis looks a little bit brighter. 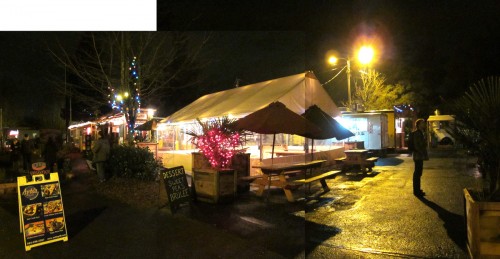 A cluster of food trucks permanently parked in a surface parking lot in Southeast Portland. 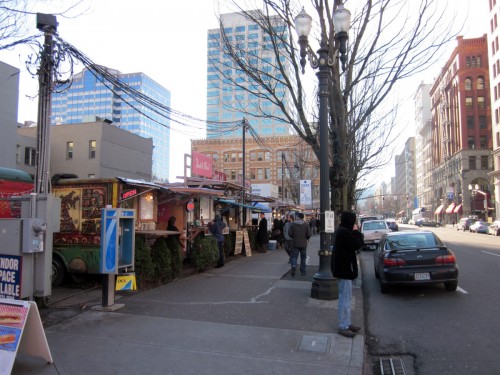 A cluster of food trucks semi-permanently parked in a surface parking lot in downtown Portland.

11 thoughts on “Are Food Trucks Good or Bad for the Twin Cities?”