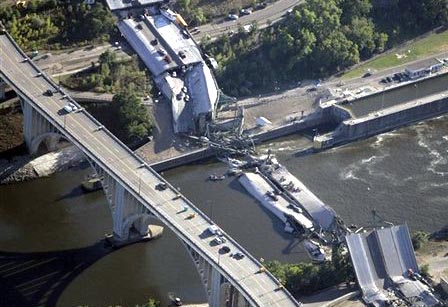 This was not a natural disaster.

Today is the five-year anniversary of the 35W bridge collapse, and stories about it are all over the news.  Entrancing tales of plummeting, accidental heroes, and seemingly random acts of engineering whirl about. But I’m interested in something else: what have we learned from the bridge disaster?

Short of a Hollywood apocalypse, the image of the broken interstate sitting in the Mississippi is the most dramatic infrastructural symbol we’ll likely see. You can’t ask for a redder flag than that, nor a more dire warning. But did this bolt of political lightning strike anything? Did it catalyze any changes? Five years later, did we shift any governmental, social, or transportation priorities?

Depressingly, I think the answer is “no.” Recent high-profile public projects depress me. The hugely expensive Stillwater Freeway extension shows how our Federal political system is highly imbalanced in favor of new construction and neglecting maintenance. Our most powerful politicians are very willing to dump money into new projects, while leaving upkeep and operational costs to dead-broke cities and states. Meanwhile, dead-broke local governments spend diminishing resources on pointless über-projects or marginal onramps. Politics easily trumps common sense. How can you explain how Minneapolis, a city run by ostensibly smart people, ended up gambling its financial future on a football team run by a carpetbagger? Ribbon-cutting and short-term thinking FTW.

Personally, I’m most interested in what the bridge disaster can tell us about our transportation network and our prorities. The USA is the most car-dependent society on Earth, a social system that reflects a long complicated history of politics, economics, and geology. This  transportation system comes with some strange consequences that the 35W bridge throw into relief. 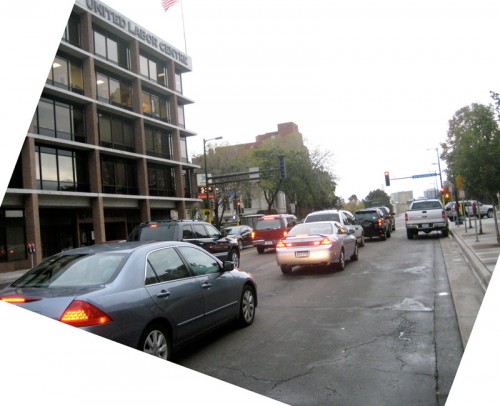 Remember how backed up the streets around St Anthony became in 2008?

One one hand, there’s a deeply rooted inflexibility to our transportation system. Because of the Twin Cities’ low density urbanism, it’s very difficult to shift away from the automobile. For most people, there’s very little alternative: we’re trapped in our cars.

Similarly, our economic system is ‘locked in’ to the automobile. From real estate development to road construction to the auto industry, we have a huge network of interests dependent on building more roads  and ever newer homes. Road construction is one of the only political solutions that both parties can agree on. If your only tool is a hammer, everything looks like a nail. And, in for many people in government, our only tool is new freeway construction.

At the same time as we’re locked into our automobiles, cars give people an odd kind of flexibility. The 35W bridge shows how, even if a key link in our transportation network disappears, we’re not completely stuck. People adapt and choose new routes. David’s numbers on traffic loads before and after the bridge collapse  show the very odd result that thousands of trips over the Mississippi simply disappeared. (This is what transportation wonks call “induced demand.”) And even more bizarre, those trips didn’t ‘come back’ when the new bridge was built. For some reason, many people simply stopped crossing the Mississippi on the Interstate.

A Canary in an Overpass

What explains the mystery of the missing trips?  When compared to more inflexible kinds of transportation networks (transit, rail), automobile networks are highly dynamic. We  have a lot more ability to shift our street system than we might think. Maybe DOT measurements about traffic loads aren’t as meaningful as we might imagine. Just because a road is carrying 10,000 cars a day right now, doesn’t mean that it needs to carry that many cars in the future. You can shift the system, re-design roads, add and subtract lanes, and people will adapt. To me, this means that cities, counties, and states should be more willing to take risks with their roads. Conversations about freeway removal, complete streets re-design, or greenways can look at how the 35W situation worked out as an encouraging lesson.

I’m sure that the 35W bridge collapse is a dramatic symbol of something. I’m tempted use the bridge to draw lessons about the downfall of 60s structuralism, for example.  Or (as I posted five years ago on my blog) the bridge reveals the randomness of a single moment.  It could show how, despite our illusions of solipsism, we’re always dependent on each other. 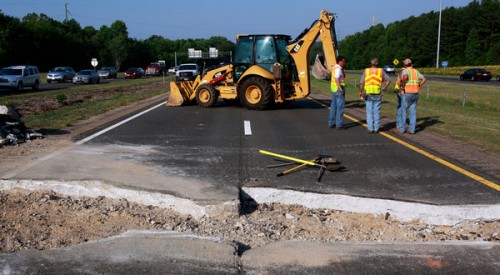 But more than anything, I suppose the bridge collapse points to how little we change. If anything, our political system has become less flexible about transportation since 2007, less willing to shift away from the status quo. President Obama’s attempt to jump-start our national rail network was met fierce resistance. A host of new governors were elected demanding more freeways, and Scott Walker rather easily stymied any hope of a efficient rail connection between Minneapolis and Chicago. (You can find similar stories in Ohio, Florida, and New Jersey.) Anyone who imagines that our governments will raise gas taxes, re-calculate Federal spending formulas, or invest more in maintenance hasn’t been reading the newspaper.

Meanwhile climate change is making everything worse. Freeways are already buckling in the heat. Something has to give. US  infrastructure is still very good, especially when you compare it to events like India’s recent power outage. But we can’t keep cutting budgets, deferring maintenance, and spending diminishing money on new road construction. We can’t keep driving everywhere, refusing to pay for road maintenance. There are still huge numbers of deficient bridges in Minnesota, and you’ll probably cross one very soon. Keep your fingers crossed.