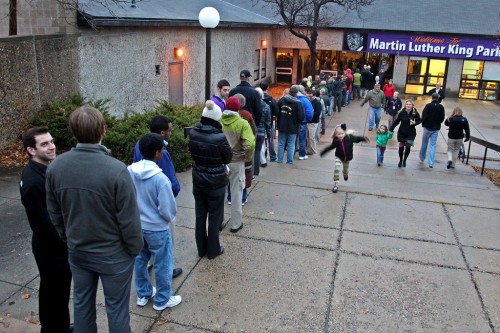 A few months ago, I read the following tweet by über-famous polling guru, Nate Silver:

@fivethirtyeight Heuristic: if a place has sidewalks, it votes Democratic. Otherwise, it votes Republican.

It’s something I’ve heard before. Bill Bishop’s fascinating book about political and neighborhood also points to the deep connection between urban form and political affiliation. Central cities are overwhelmingly demcoratic. In exurbia, it’s the exact opposite.

One of the key reasons why our political experience is marked by incredulity is because of this spatial division. And sidewalks may just be the most obvious sign of this gap. More than anything else, sidewalks can predict your vote,  what kind of political values you have.

What is is about sidewalks that make them a political lithmus test? Do they symbolize something fundamental? Do they attract liberals like flypaper? Do sidewalks foster empathy and understanding? Which came first, the sidewalk or the egghead?

There are two answers to this question. On the one hand, you can argue that politically left-leaning people prefer sidewalks, and choose to move into neighborhoods that have them. (Meanwhile, libertarian conservatives prefer large houses on the edge of the city.) People move into neighborhoods which match their ideologies and aesthetics, and over time, both groups “self-select” and segregate across the metro area. In his book, The Big Sort, Bill Bishop describes exactly this phenomenon, how US cities have become more segregated over the past 30 years. (Back in 1976, only 27% of voters lived in so-called “landslide counties,” uncompetitive neighborhoods where the vast majority of people voted for one candidate. Today that number is over half.)

More and more, people live in places where the vast majority of people agree with each other. And for left-leaning folks, that means places with sidewalks. Sidewalks serve as a classic symbol of urban togetherness. Sidewalks represent an image of society involving dog-walking and diversity. Sidewalks attract Obama supporters. On the other hand, for a tea party libertarian, a sidewalk is like garlic to a vampire. No self-respecting free-market kool-aid vendor would be caught dead on one. They stay away, safe and secure out on the edge of town in a three-car garage utopia.

Probably the bulk of the matter involves this kind of self-selection, like-minded people moving into neighborhoods that suit them. But what about the other way around? Might sidewalks foster tolerance? Do they actually have an effect on people, changing how they think about their neighbors?

Here the case is a bit trickier. You can’t cite simple demographic statistics to prove that sidewalks affect people’s values. Rather, you have to do some guess work.

New Urbanists, among others, have long been interested in figuring how how sidewalks affect behavior. Does walking around one’s neighborhod increase tolerance? Does walking your dog make you more likely to talk to, and try to empathize with, your neighbors? Does having a corner coffee shop foster social capital?

Just because it’s impossible to have definitive answers to these questions, doesn’t mean that our urban enviornments have no effect. Jane Jacobs famous book argues that, without sidewalks, the kinds of interactions that make up the “urban ballet” cannot occur. In the end, we are inseperable from our environments. You can’t study people’s beliefs and values in a space-less vacuum. Our streets, sidewalks, homes, and architectures have profound effects on our political beliefs. Maybe sidewalks do foster different kinds of understanding. At the very least, it’s something to think about as you walk or drive to the polls.

7 thoughts on “Do Sidewalks Make You Vote Democratic?”