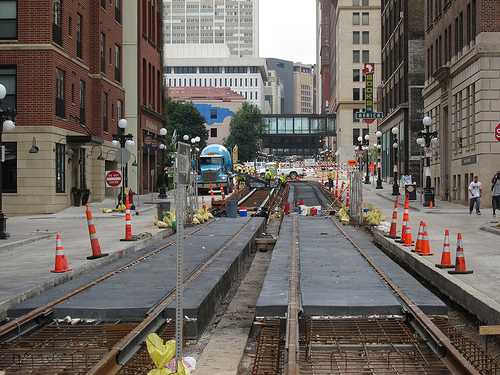 Of all the categories included in the Streets.mn “Best of” series, this category was the biggest blowout. With 92.2% of the votes, the winner of the award for the 2012 Best Current Multi-Million Dollar Public Works Project (by a landslide):

The eleven mile light rail project linking downtown Minneapolis with downtown St. Paul is estimated to cost $957 million. Heavy construction expected to wrap up soon, and the line will officially open for business sometime in 2014.

The competition in this category didn’t even come close. Here are the runners up:

Asking a bunch of urbanists to pick out their favorite multi-million dollar public works project is a curious thing. For a lot of urbanist and planner types I know, the cost of a project isn’t nearly as important as the perceived benefits. Regardless of what types of projects we tend to prefer, we all like to think that the benefits of our favorite projects outweigh the costs, though we rarely go through the effort to justify it (and when we do, it is easy enough for someone on any side of the project to question the methods and assumptions). I think this becomes increasingly true as the costs of a project increase.

In this case, the “best” project will simply be the one we like the most – the one that seems to promote our personal preferences – rather than the project that is able to somehow demonstrate the greatest benefit per cost. Thus, it’s not surprising that streets.mn readers overwhelmingly support the Central Corridor LRT project over a football stadium and several bridge & interchange projects. I think this says more about streets.mn readers than it does about the projects themselves (if this poll had been conducted in, say, the comments section of any Star Tribune article, I expect the results would have been a bit different). I have often had the impression when discussing the Central Corridor with fellow urbanists that the cost of this project could double and it wouldn’t dissuade many of the proponents (I could be wrong about this).

However, I’m mostly looking forward to seeing what the new transit line will bring to the corridor over the next ten years following 2014 when it opens. Will the envisioned redevelopment happen? If so, will it be transit-oriented or auto-oriented? Will chaos ensue? Will operational issues plague the line? How about safety issues? Will rents along the corridor rise? Fall? How about parking? Will Porky’s ever come back?

The answers to these questions (and more) will be right here on Streets.mn in 2024.

By the way, my favorite photos and updates about the Central Corridor are on the blog Let There Be Light Rail.