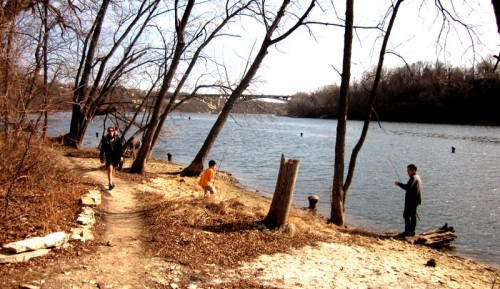 I’d never been waist-deep in the river before. I’d followed my friend down the bluff, going down the wooden stairs, tracing along riverfront pathways until they stopped at a dark pool. At this point, the Mississippi breaks into a bunch of small slow-moving streams, a maze of islands, and this path stopped at a large pool between them. Dark river bluffs rose up on the far side looking like arched doorways for lurking giants, old rooms leading somewhere forgotten. The bright moon bounced off the black river, tree branches reaching up to grab it from the sky.

“I’m right behind you,” I declared, almost false bravery.

We were urban exploring, and I wasn’t sure where we were headed. In the middle of the Mississippi pool, lifting one slow foot at a time up from the mud, there was a loud smacking sound. About ten feet away. We turned and saw a splash.

“A beaver?” I was guessing. “They slap their tails on the water to warn of danger.”

We slowly mucked through the river pool until we reached a tunnel into the bluff, climbed up onto a plank, and crept onto our feet, inching into the catacombs beneath the old flour mills.

Finally I found myself in a small cavernous room filled with old debris, broken pieces of ceramic tile and damp rocks. The cave-room’s main feature was a large ten-foot hole in the ceiling and the floor, through which a torrent of riverwater poured down constantly crashing down dropping twenty feet through the middle of the room. A deafening white noise, a manmade waterfall.

This was the forgotten heart of Minneapolis, the old river raging underneath the city. We were part of the old canals, deep beneath the footfalls of dining couples on the sidewalks above. This was the back of ancient river on which bricks and steel had grafted. We stood in the dark for a long time listening to the endless sound of the river falling through the floor, in a cave beneath the city. It still spoke. You could feel the mad force of falling water, the force that had driven a thousand men and erected mansions and shanties.

Yes, I love the Mississippi. I suppose it’s because the river makes such a good metaphor. For Taoists, rivers are time, always different, always the same. To cross the River Styx is to die and to forget. Or I think of Thomas Cole’s famous Oxbow, where the changing river is history being written, slowly at first, then all at once.

Though lovely, what I love about the river isn’t its landscape. Crossing the Mississippi bridges, as I do so many times each day, you can look down at the vanishing point, the bluffs that climb up each side giving relief to the seasons. Here the river is beautiful but so distant. I supose that all cities have a backdrop, something to place outside the window, mountains or an ocean. The river is just another one of these still life paintings, and architects take great pains to arrange their views. Here the river remains untouchable, lifeless.

No, what I love about the river is how it flows through the city, how it floods and settles, how it disturbs the land and stakes its raging claim. The riverfront is a wild and open place, refusing to solidify. When I was a kid, growing up in a suburb near the Mississippi, I used ride my bike down to explore the river flats along Lilydale park. Elm trees rose up around ruined foundations of abandoned homes, and you could find occasional antedevulian artefacts, bathtubs or bottles.

That park is still one of my favorite riverfront bike rides, diving through the bluffs like a canyon, under abandoned railroad bridges and into the heart of downtown. Here, the Missisisppi forms a wild and lonely riverfront. The city seems to disappear, and you see slow dirty men wandering in the distance between the trees. 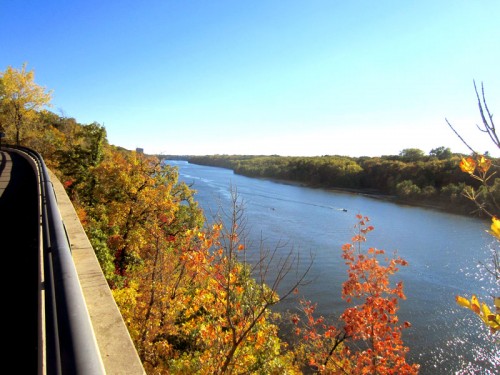 Elsewhere the riverfront meets the city, shy at first, then with gusto. Think of the Mississippi running down through North Minneapolis, passing between twisted stacks of scrap and homes built almost into the bluff, their wooden decks descending onto a sliver of beach. Here the river is lined with marginal docks, and once I wandered with a friend down a staircase along the riverside in the hopes of finding a houseboat.

This was years ago, the Creative Electric Studio had created a museum devoted to a forgotten species of Mississippi mermaid, and we found the museumboat just as it was casting off. Onto the river with a hop for a brief voyage, discovering things on the water I’d never known, and docking a short while later a bit farther downstream. Here the river feels like a welcome mat to the city, and once I waltzed on a wooden dock in the firelight.

The river is in the air, too. All summer long, each time I cross the Stone Arch Bridge in downtown Minneapolis, for a brief moment I feel the river touching my face. The waterfall explodes itself into the smallest invisible mist, a faint smell fresh and musty, rising and falling in the air above.

In the fall, I will sit on the very edge of St Paul’s West Side and wait until a fox emerges from the forest that clings to the bluff, still wild and scampering into the dark. And on the last nice day of the year, I climb down the bluff to the river beneath the Franklin bridge. I sit in the dirty sand with a book as the sun drops Westward before me, feeling the sun sink into my skin and savoring the warmth to keep through the wintertime, when the river freezes only at its edges and becomes a Rorschach pattern of grey ice and white snow and dark water.

One of my favorite river metaphors is in Henri Bergon’s Matter and Memeory, a turn of the century book of French philosophy about how rhythm and temporality form the foundation of life. He writes,

When we are seated by the bank of a river, the flowing of the water, the gliding of a boat or the flight of a bird, the ceaseless murmur in our life’s deeps are for us three separate things or only one, as we choose.

Bergson is trying to describe how multiple times can co-exist, how the river and the bird and the man sitting on the bank each contain a unique duration of life and death and memories and futures opening up. All these things existing at once: my fleeting thought, the slowly changing city, the river passing it by.

The river is the oldest living thing in Minneapolis. Along its banks you find the city’s tired pulse, places that refuse propreity and property, old staircases clinging to forgotten culverts, and brown fishermen and the remains of campfires and occasional people walking large dogs. The river is another world in the middle of the city, and without it Minneapolis and St Paul would be empty. I love the urban Mississippi. 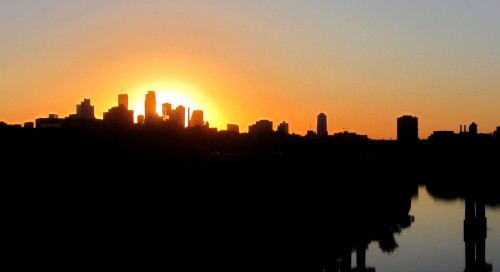 2 thoughts on “I Love the River”