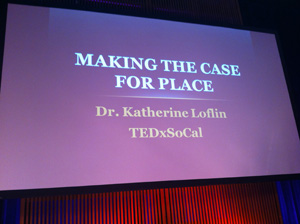 A few weeks ago, I attended one of those big civic dinners that take place annually in every city across the country. It was fun! The mayor, all the council members, the business community, key city staff, the planning commission (including me), philanthropic foundation heads, and lots of Saint Paul’s architects, developers, artists gathered in the downtown convention center banquet hall to celebrate our accomplishments over the past year. The keynote speaker was Katherine Loflin, a placemaking consultant from North Carolina who had spent a week in Saint Paul discussing the importance of place with local decision makers. She was also kicking off the “Forever Saint Paul Challenge,” a million dollar open-sourced grant competition for Saint Paul.

I have nothing against Loflin; in fact, she seems very good at her job. I’ve nothing against the Riverfront Corporation or the Saint Paul Foundation, either. All cities have local downtown growth coalitions, and Saint Paul’s seems to do a better job than most. Over the years, I’ve even become a defender of “placemaking” as it has gained popularity and evolved into a semi-scorned buzzword in city planning and public art discussions.

But as the banquet rolled on, Loflin’s words began washing over me like the roller squeegees at the gas station car wash. “Place optimization.” “Making the case for place.” “Reading the economic development playbook…” When she wrapped up her talk by saying that “you should be exactly who you are, but you should be the best who you are you can be,” every airport bookstore I’ve ever seen flashed before my eyes. It seemed that my world had become a corny self-help cliché, and there was no escape.

That night, I encountered the paradox of the placemaking expert, the nonsensical way in which the rejection of standardized approaches to urban design had generated an entire industry based on that rejection.  The idea that each urban environment is made meaningful by those who use it every day has become so trendy that we’ve reached to the point where we’ve begun flying in national experts to tell us to stop flying in national experts. It’s a total paradox, and placemaking has begun to seem rather silly.

The Cretin Derham Hall ballfield is one of my favorite examples of placemaking.

In Defense of Place

The problem is not with placemaking per se. I’ve spent the last six years of my life studying and teaching geography, and learning about the riveting intellectual lineage of the term “place.” For example, the French vitalist philosopher Henri Bergson’s turn of the century theory of memory wraps together place and perception. In the 1930s, Heidegger’s famously difficult Dasein was a complex way of describing place, how some things feel “close” and others “distant” as we use and experience them. Kevin Lynch’s urban perception work in the 60s, Minnesota geographer Yi-Fu Tuan’s “place vs. space” work in the 70s, or philosopher Ed Casey’s descriptions of place and phenomenology in the 90s have all reemphasized the importance of place to human life. Similarly, in the art world movements like site-specificity, minimalism, and performance art work intimately with notions of place and the public. Place is nothing to scoff at.

In a nutshell, place is the idea that our environments are not “just there.” Instead, place describes how each location comes to mean certain things to certain people, how we fill our worlds with meaning as we inhabit our homes. This might seem obvious, but for a long time (at least since Kant), Western ontology has posited the homogeneity, interchangeability, and commensurability of different locations. To speak of placelessness is to say that one spot is the same as the next, that our world can be reduced to so many square feet. This spatial perspective has had massive consequences, from the pitiless commodification of the earth’s resources to the arbitrary drawing of national borders to the continual displacement of disempowered peoples. Every time Native Americans were moved to more marginal land or low-income residents resettled for a new freeway, place was being trumped in favor of the commodified abstraction of space.

The goal of the “placemaking” movement within urban planning is to begin paying attention to how people relate to their environment. For example, William Whyte’s Project for Public Spaces has spent half a century describing how people actually use their urban environments, in the hopes of leading design conversations away from formal abstractions and toward the intricacies of everyday life.

As its become more popular during the past few years and inspired a fundraising bonanza, placemaking has emerged as the lateset buzzword within both the urban planning and public art worlds. It’s not a horrible outcome, because in many ways, placemaking offers a more democratic way of describing the relationship between people and the city. For example, while all public art is placemaking, not all placemaking is public art. You wouldn’t call the pigeon lady on the park bench, the family grilling on the stoop, or the man who walks his dog around the block each morning “artists,” but they’re all important parts of their community and all creating meaning in the places they live. Placemaking offers us a language to describe these localized patterns of everyday life.

The great irony of the placemaking debate is that it has become a victim of its own success. If placemaking describes the differentiated local patterns of everyday life, it should inherently be unreproducable. The lesson of placemaking is that each place is unique, has its own patterns and meanings. This fact should make it all but impossible to take ideas from one city and apply them to another. Yet that’s exactly what urban leaders crave, and that’s exactly how our funding organizations are set up. (E.g. foundations, banks, the Federal government.) There’s an insatiable desire for uniformity, for national standardization. No city wants to be out on a limb, the only one that’s designing streets, parks, or buildings in some odd way. We crave the comfort of knowing that we’re normal, we crave recognition of our peers.

Thus the placemaking expert, someone whose enviable job is to travel from city to city and loudly, smoothly declare that each place is unique. It reminds me of the wonderful scene in the Life of Brian, where Brian (not Jesus) preaches individuality and free-thinking to his besotted followers. Here’s the scene:

FOLLOWERS: Tell us. Tell us both of them.

FOLLOWERS: Yes, we are all different!

BRIAN: You’ve all got to work it out for yourselves!

FOLLOWERS: Yes! We’ve got to work it out for ourselves!

BRIAN: No! That’s the point! Don’t let anyone tell you what to do! Otherwise– Ow! No!

The paradox of placemaking is that each city has to work it out for ourselves. The problem is that our leaders have spent their whole lives turning to national experts and standards for answers. So today, even a theoretically un-commodifiable concept like placemaking has become standardized and reproduced. Maybe we’d better off listening to the placemaking experts that are already here in the Twin Cities. There are many brilliant artists, planners, scholars, and community leaders working every day in Minneapolis and Saint Paul, and it seems a bit ironic to have to fly a consultant in from  North Carolina to tell us to listen to them.

People doing some placemaking by eating hot dogs on the sidewalk outside the Saint Paul Farmer’s Market.

3 thoughts on “The Paradox of the Placemaking Consultant”