This post is co-authored with David Levinson (a displaced Marylander who lives in Minneapolis, and who blogs at The Transportationist and Streets.MN)

We have explored the case for subsidy for transit and roads in previous weeks, discussing the pros and cons of capital and operating subsidy. Yet our discussion has largely focused on individual facilities or projects. In this post we  work through how the physical structure of networks varies under public or private ownership regimes.

If the street network were limited to one road, it would be very easy to supply privately and finance through tolls, see the Ambassador Bridge in Detroit as an example. For a variety of reasons, it is in fact a network and not just a link. This provides a wealth of benefits, as well as complexity.

Ubiquitous networks have positive returns to scale, in that the larger the network, the more valuable it is, as you can reach more destinations. Think of telephones (not very valuable if they are simply tin cans connecting you to a neighbor), transit (not very valuable if it only runs a single route), or airports (you won’t get very far if you only had direct connections, not hubs).   The problem is that building ubiquitous networks requires large up-front capital expenditures and a base beyond existing users.  For instance, while the Interstate Highway System was built by “user fees”, before the first mile of concrete opened, drivers (who obviously had not used the Interstate) were assessed federal motor fuel taxes on all miles traveled, not just Interstate miles. The class of drivers as a whole paid for the interstate as a whole, and ultimately benefitted as a whole. Any individual traveler may or may not have seen those benefits, or paid for them.

Ownership and finance and network size

Generally speaking, the public will over-invest in network size relative to the social optimum and the private sector will under-invest relative to optimum, though it gets very complicated.

However, private actors will expand their networks in response to demand where the public expands networks for other, and often speculative, reasons. (There are obviously exceptions.)

Consider again the US Interstate Highway System. This 47,000 mile network is extremely large, and is overbuilt in many areas both rural and urban. Unlike most  European limited access motorways, the US Interstate was built through—destroying parts of—central cities and inner ring suburbs. The case of the Rondo and I-94 has been made nationally famous by Alan Altshuler.  While these urban freeways are well used, in retrospect they represent an unnecessary expansion of the Interstate system and were built because of generous 90 cents per dollar of subsidy by the federal government (from federal gas taxes paid by motorists into the Highway Trust Fund).  While some of the Interstate network is congested, much of the available capacity sits idle for most of the day.

Ownership of developing networks also leads to network design that promotes goals other than transportation. With contemporary public infrastructure, political goals are often a primary justification. Construction jobs, for instance, are politically popular but are a cost, not a benefit to the project. Yet public officials support new construction  because of the jobs promised.  These political goals risk the costs of the project to exceed any benefits. (There is a macro-economic argument that these jobs benefit the economy as a whole in a period of under-employment in the road construction sector. I.e. if the project’s laborers would otherwise be unemployed, building something may be better than doing nothing. However if those laborers would otherwise be doing something else more valuable, they are unambiguously a cost.)

It should be noted that President Eisenhower did not expect that the highway system that bears his name would be built in existing cities.  He found out this was the case when construction started in Washington, DC and slowed his trips to Camp David (source: The Big Roads by Earl Swift, p.247).

Rural freeways are overbuilt in a different way in that there is much too much capacity for most intercity travel.  Minnesota, along with many other states, is looking to de-pave (return to gravel) some chronically underused roads (though not freeways).

Contrast the highways with a privately developed network: broadband.  The United States has notoriously slow broadband access, and in part this is because we expect that these services should be only provided privately (there are debates about this as well). When a private network provider develops a network they will build a network based on expected profits from usage. This precludes large capital investments that are purely speculative in nature. Because of this, wise but profit-maximizing broadband suppliers react to market demand by carefully and slowly building out network capacity rather than building lots of network capacity that may be used at some point in the future.

Not all private network constructors are as careful (or profitable) as Comcast. History is rife with speculative bubbles in both the railway and internet sectors, while airlines as a whole cumulative lost more money than they have made. However in those bubblicious cases the race between many competing network providers   aimed to establish the monopoly (and gain market share) rather than nourish an existing monopoly, as Comcast does.

Broadband networks are also a current example of how monopoly affects network development. Broadband networks are controlled by oligopolies that have little competition in areas where they provide service. The lack of competition means that these companies need not compete on quality or speed in order to maintain their revenue targets, which helps explain why development of faster services is somewhat sluggish. In fact, US broadband is slower and more expensive than it is in many other countries (currently the US ranks 16th in broadband speed despite having the globe’s largest economy).  Within the broad networks consumers are not fully realizing lower costs of transporting data online and firms providing the services are ensuring that their networks remain profitable.

Yet the reality of what is happening with broadband is a bit less onerous than oligarchs exerting their will on the American people. The private networks are reacting to consumer demand in as much as they are anticipating it. One major exception is Google Fiber, currently being laid in Kansas City and Provo (and soon Austin).  Google’s reaction to consumer demand is also how more conventional transport networks developed.

The streetcar era of city development is instructive.  During this era (approximately 1890-1930) streetcars represented a substantial technological improvement over existing horsecar technology. Most of the streetcar networks in the U.S., including the Twin Cities, were built as tools to develop real estate. As access creates value, these private networks expanded until the value added to real estate no longer supported expansion of the streetcar network. The value of streetcar networks for land development declined because of competition from automobiles (a technology that took advantage of production and transmission—e.g. roads—put in place by bicycles and streetcars), congestion caused by cars, and increasing operating costs as fares were usually restricted through regulation as a condition of the franchise.

The freight rail network  provides an example of how and why networks contract. Competition from trucks led to a process called “rationalization” beginning in the 1930s where many miles of track were abandoned. This process accelerated in subsequent decades and by the year 2000 the amount of rail track miles was about 144,500, which was the approximate size of the network in the 1880s. The US rail network changed dramatically because of technological changes (trucks, cars and planes challenged traditional passenger and freight markets), regulatory changes (the U.S. government deregulated the industry in the 1970s), plus efficiency and productivity gains. For freight movement, these have been positive developments. For passenger travel on railways, the contraction and specialization of the rail network means that expansion of passenger rail service requires new network construction. The shape and function of networks are affected by ownership.  Positive returns to scale from networks are captured by users but often difficult to monetize.  Hub and spoke (or radial) networks, which are conventional for many transit systems, are an example of how network design affects the usefulness of the overall system. Transit networks are good at getting people into and out of central business districts (the hubs) with few transfers but leave those who travel suburb to suburb or anywhere other than downtown in the cold. This image of the Boston T system demonstrates the classic form. These networks are not optimal for access to opportunities anywhere but central Boston.

As most job growth in the US is occurring in the suburbs, historical hub and spoke networks don’t help most people get where they need to go. Yet, for transit, the best market remains its traditional market, serving downtown and large employment centers from pre-1930 residential areas. Whether it should play to its strength or follow its customers is an important strategic question transit agencies face. Most, like the Twin Cities, have chosen to reinforce the pre-War employment nodes (downtown), with some radial extensions to the largest suburban activity centers (Mall of America, Eden Prairie).  In contrast, some cities are rethinking their transit networks so that they better reflect where people need to go. Tallahassee recently redesigned their bus network as a grid. The old network and new network are shown below. 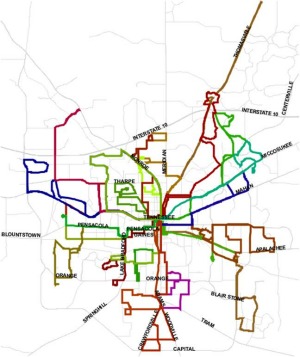 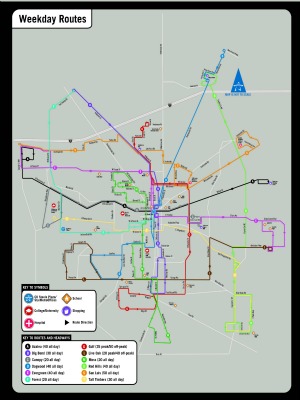 So who should own and operate networks?  There isn’t an obviously optimal network ownership structure. Much as we argued for a regulated utility model for roads, regulating transport networks to achieve economic and societal goals is important. Public networks built to achieve political goals will be too large and may end up distorting travel choices people make. Justifying transport investment because of construction jobs is a good way to make sure the transport network is always expanding whether we like it or not. Minimum parking requirements in the zoning code ensures that the parking nodes on the network continuously expand, which leads to more driving than we want. Yet networks built by oligopolists and monopolists to strictly be profitable through user fees may not be large enough for broader goals and will maximize private profits at the expense of the public good.

As a thought experiment, we can wonder whether a private company would ever provide the current rail transit expansion occurring in the Twin Cities. (Ignore land acquisition costs for this and assume that the goal of network design is to maximize ridership.)  The evidence that no private company proposed such an investment suggests the expected profits (if any) were insufficient to justify. The two best corridors: the Hiawatha (Blue) and the Central Corridor (Green) lines perhaps serve adequate ridership to justify their placement connecting four major employment and activity centers (downtown Minneapolis, downtown Saint Paul, the Mall of America and the airport). The Southwest Corridor, on the other hand, is an expansion of the network that it is hard to foresee ever getting past the discussion stage at a private company (unless they were also major land-owners). The expected benefits of the Southwest Corridor are speculative and there is no (at best very little) current demand for the service.

This example isn’t used to say that private networks are superior to public ones. Like everything else, there are trade-offs.

Here are some takeaway points about network ownership.