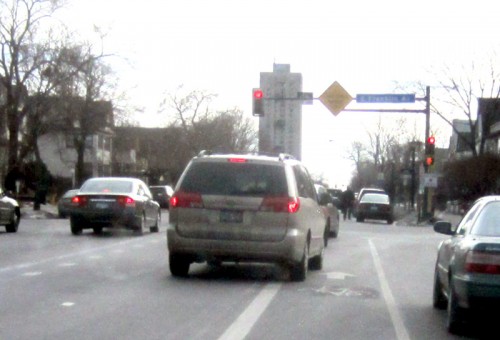 I ride from Northeast to South Minneapolis four times a week. Basically from one end of town to the other, including a trip through Downtown on the way. The route is very simple, really: I hop onto the great little 5th Ave bike boulevard, drop down 6th to the Stone Arch Bridge, and ride Portland straight to Minnehaha Creek, which I take to Nicollet. I’ve thus ridden Portland (and Park) at most hours of the day and night, with and without rush hour traffic. I am very grateful for this route, which is as safe a route as one can experience on streets in the Cities. There are, though, ways that it could be improved on. To get at these I think it’s important to look honestly at what Park and Portland are and are not.

Both streets are almost entirely dedicated to housing. And most of that to single-family dwellings, with some multiplexes and small apartments thrown in the mix. Which is to say that Park and Portland are not dense. Neither do they have destinations. Car traffic drops off dramatically after Lake St (and the 35W exit just after). Moreover, traffic is never terribly heavy anyway. Though it is fast! This seems to say to me that Lake and the freeway are the two places attracting cars.

There are no restaurants, shops, and relatively few parks. Yet that there are no destinations is not entirely accurate. The Midtown Greenway runs perpendicular, as does the River Lake Greenway and the Minnehaha. Obviously they also lead downtown and, not unimportantly, to Richfield and Bloomington. Note, though, that these are all cycling connections. Park and Portland therefore, coinciding with the general growth of infrastructure, are and may yet become increasingly important from a cycling standpoint. They are much less significant for their auto accommodation, which was made redundant, as has been pointed out, with the construction of I-35W.

What this suggests me to is that Park and Portland can best function as cycle-commuting routes; as ways to get somewhere else. Even if we were to advocate changing both into two-way streets – which seems like a pretty good idea – they simply would not have the same function as the lanes on Chicago, for instance (or the function they would have on Nicollet, where their absence is conspicuous). These routes aren’t going to increase business, for instance, or aid to create “complete streets”. This is as true further south as it is through Downtown, where there is little of interest on the streets themselves, with the exception of the football stadium and, uh, the hospital?

With this in mind, what might increase the use and efficiency of the two streets as cycling routes? Interestingly, despite the wide berth of paint afforded the lanes, in all the spots where accidents are most likely to happen, cars are more than happy to misuse their space, turning even non-dashed sections of the cycle space into extended turn lanes. Safety and clarity would be greatly increased by a physical (concrete) separation of the two sections. Literally, a curb or some kind of barrier. This would also have the effect, at least according to several studies, of increasing cycle ridership. Though not relatively dense, there are still a great many people living on Park and Portland and the surrounding area. Constructing a street-grade two-way cycle track on both streets would encourage more people not only to commute to work, but also to travel within the metro. (I would suggest two-way lanes whether or not the streets change to the same; at least until the Minnehaha, though why not extend it all the way through Bloomington?)

Given the important cycle routes directly intersecting P&P, this could potentially increase the number of people taking trips to Downtown, the Creek, the Lakes, Uptown, Longfellow, and Lake Street. Perhaps even the Blue Line and River Parkways. Physical barriers would also greatly increase safety at intersections, disallowing vehicles ever to cross into the cycle lanes.

The traffic lights too could use a change. They don’t seemed timed to make anyone happy right now, be they driver or rider. Because of their importance as cycle commuting routes, I think that timing a “Green Wave” for Bicycle (not Auto) speed during rush hour makes a great deal of sense. This would be a life saver in Downtown, where I end up spending more than half of my commute, though it makes up only a small part of the total ride, as the lights seem hellbent on making me stop at every single one. If only there were something nice to look at!

Finally, more and well-placed bike storage at key destinations, a bike shop or three, and other “small” factors would help. All of these would take an already good addition to our cycle-friendly city and make it glorious.