Shoreview’s cycleways are quite inviting; for residents, folks in neighboring communities, and those just passing through. They’re also inviting for the thousands of people who work in Shoreview, but most of these workers don’t have bikes at work to ride.

Shoreview recently took a step towards becoming one of the first suburbs, possibly in the nation, to change that.

A few weeks ago I had the pleasure of joining Ady Wickstrom, Shoreview City Council, Tony Desnick, Director of Greater Minnesota Strategies for Nice Ride MN, and Charlie Grill, Shoreview Public Works Coordinator, for a bicycle tour of Shoreview.

Nice Ride is sponsored by Blue Cross and Blue Shield of Minnesota, who recently put out a request to communities around the state seeking proposals for programs that can help communities improve the health of the folks who live and work in these communities. One overwhelming request from cities was for bike share systems like Minneapolis has.

And this is where Tony comes in. He joined Nice Ride this summer to fulfill that request. His job is to take bike share beyond Minneapolis and St Paul proper to other cities throughout Minnesota—from the suburbs and exurbs of the Twin Cities to Rochester, Bemidji, and beyond.

For good reason, people recently got excited over Minnesota having the lowest health insurance premiums in the nation. Contrary to some politicians bluster though, this has nothing to do with MNSure. It does have something to do with how effectively Minnesota healthcare providers deliver their services, how well some safety net programs have worked to keep people healthier and from becoming significant healthcare expenses, and, the overall health of our population.

Perhaps most important is the latter, the overall health of our population. We Minnesotan’s are a healthy lot, at least compared to folks in other U.S. states. This is largely our more active lifestyle and that we seem to eat healthier (note our abundance of local/organic eateries, hipster tomatoes, and farmers markets). 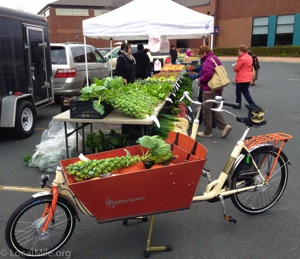 100 pounds of produce and pumpkins from the Shoreview Farmers Market.

Compared to Europe and Asia however, we know that even Minnesotan’s still have a lot of room for improvement on the health front, particularly in the area of preventable diseases. Hypertension, stroke, joint problems, heart disease, alzheimer’s, and other ailments caused by obesity and lack of physical activity lead the way and are estimated to account for as much as 35% of our highest-in-the-world per capita healthcare costs.

Insurers are also feeling increasing pressure from people who already lead healthier lifestyles. These folks don’t want to continue paying higher and higher premiums to cover the higher healthcare costs of people who choose to lead less healthy lifestyles. As one insurer pointed out, “it doesn’t make sense for someone who drives very carefully and never has a crash to pay the same premium as someone who drives less carefully and has a crash every year. If you are higher risk; choose to smoke or be obese, you need to pay your fair share.”

And this is why insurers and employers have such a vested interest in our health.

Biometric screening questionnaires and the discounts offered for completing them have helped to make us more aware of the healthy and not so healthy choices we make. Many employers have also promoted healthy living initiatives and offered special programs for people with low biometric scores to help them improve their health. Now they’re going the next step and saying that if you want the lowest rates, you need to have actually done something about controllable risk factors such as low physical activity and being significantly overweight.

While a daily sweatfest at the gym might be good for you, moderate routine exercise is appearing to possibly be much better. Not only do people get the benefits of little bits of exercise spread throughout the day, increased metabolism, and reduction in sedentary periods, but while we are good at hitting the gym for a couple of weeks after our New Year’s resolutions, we’re not so good the other 11 months of the year.

Active transportation, walking and bicycling to many destinations instead of driving, is something we can do, enjoy doing, and will do, all year long (though I’m sure I’m not the only one who limits how far they’ll ride when it’s really nasty weather out … like below zero).

Employers across the country and Twin Cities are increasingly promoting active transportation as one of the best options for regaining our health.

A critical element for the success of any kind of bike share program, according to Tony, is good infrastructure. There is no better proof of this than our own Not-So-Twin-Cities.

Tony Desnick of Nice Ride MN tries a Shoreview cycleway on a Bakfiets. Could BakfietsShare be in our future? If he learns to ride on the right side of the path?

Bike share has been a huge success in Minneapolis where there are good facilities and more and better facilities being built. Across the river in St Paul it’s another story. St Paul has bicycle facilities, but not nearly enough and what they have is often missing the ‘good’ part. (The good news is that St Paul seems on the road to correcting this deficiency with their new Sustainable Transportation Engineer/Planner, Reuben Collins.)

The criticality of good and safe bicycling facilities has been echoed by bikeshare operators across the globe.

Nice Ride doesn’t want another St Paul experience and that was a key element behind our ride on Tuesday. Tony got to experience Shoreview’s bicycling infrastructure by the seat of his pants—quite literally.

Suburbs and outstate communities may require different programs and bikes than what has worked so well in more dense cities like Minneapolis and New York.

Nice Ride was a leader in the U.S. with bikeshare, though they were able to piggyback a bit on the experiences of cities like Montreal and Nice, France. These new endeavors may be a bit more groundbreaking. Fortunately, Nice Ride has the people, backing, and creativity to make it work. And with leaders like Ady and Charlie, Shoreview could become even more of a bicycling and health leader.

For Shoreview this could prove to be one more benefit in helping to attract and keep good employers and improve the health of the community, fiscally and physically.

6 thoughts on “Riding To Lunch In Shoreview”