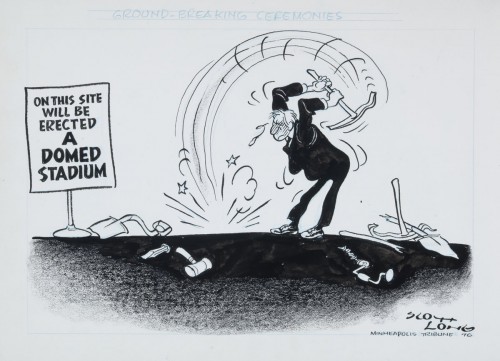 This cartoon, published in the Minneapolis Tribune in 1976, is a reminder of just how long and ugly the battle to build a domed stadium in downtown Minneapolis really was. The Twins and Vikings started pushing in the early 1970s for a new home to replace old Met Stadium in Bloomington. It wasn’t until December 20, 1979, that the teams and the city broke ground on the shrine to cut-corners that would eventually be known as the Hubert H. Humphrey Metrodome. Now, 34 years later, the dome is about a month away from demolition. Here’s to planned obsolescence!

More at Minnesota in the 70s