Late last year, I met with Charlie Zelle, Commissioner of the Minnesota Department of Transportation to discuss options for potential state funding of bike share in Greater Minnesota. After our discussion, Charlie agreed to a short interview for minneapolize.

The Commissioner is passionate about creating solutions for Minnesota that include all modes of transportation and to improving pedestrian and cycling solutions for greater safety and convenience.

Full disclosure: I’ve served on a committee with Mr. Zelle for several years and we’ve become (if distant) friends. This might explain the softball nature of the questions. Still, even this short interview gives a good insight into how he intends to lead the Department.

I’m told that when he arrived at the job, he was told that he could acquire a new Chevy Suburban – the past standard – as his work vehicle. He instead chose a Chevy Volt (plug-in hybrid) as his daily driver. If you see a dark blue Volt with white MnDOT graphics on the doors plying the streets and highways of the state, wave hello to your Commissioner of Transportation.

The interview begins with me in bold:

I understand when you went to a meeting at Camp Ripley with your senior managers that you rode a bike part of the way, can you talk about that decision and the experience?

It was a great experience; I’ll start there. I was amazed at the level of passion within what has traditionally been viewed as a highway department, but it is a truly multimodal transportation company and there are a number of people within the agency who love riding a bike and some commute every day through the winter to MnDOT. I’d committed to riding a bike to Camp Ripley, in February, when I was to be the commissioner. It was when I actually did a Google search to see exactly how far was that, and I realized it was like 140 miles so I said, “Can I take the train part of the way?” So I took Northstar, and I said let’s meet for those who want to leave, we are leaving from Target Field at six in the morning, and we’re going to try to get to the managers meeting at Camp Ripley that afternoon.  And there were only two people waiting at the station and so with me there were three. We headed out and then we met up with another person, a woman at the Rogers stop.  So now there’s 4 of us.  And we rode, the four of us from Big Lake to St. Cloud, which was clearly the hardest for me, part of the trip because these were really fit bike riders and they were not very easy on the commissioner. We were averaging around 15 miles per hour and then they started going 16 miles per hour, and then 17 miles per hour  . 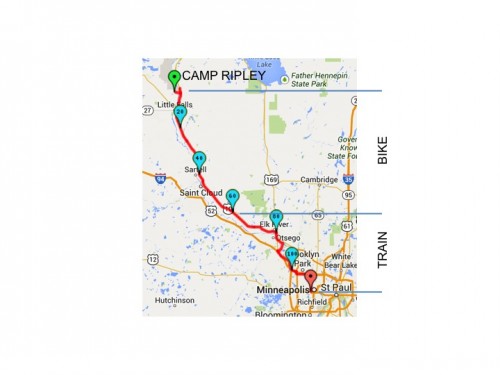 We were at about 18 miles per hour on average, and I was about an inch behind one of the guys wheels because I wanted every help I could get through drafting, and when he was averaging 19 or 20 miles per hour, after about 20 miles I kind of said, “Hey Guys? Be nice to your commissioner.”  Someone said, “Oh, oh.  I didn’t realize that”.  By the time we got to St. Cloud, we met up with another 10 people and along the way in Little Falls another 7 people so by the time we rode into Camp Ripley there must have been 30 of us and it was great. It was really great, a beautiful day.

How did you get home?

There was a group, maybe about half of them that rode home, I had a meeting that was an excuse, I actually ended up getting a ride back.  Next year, I’ll try to make it both ways. It’s an annual meeting, it’s not necessarily at Camp Ripley, we have a managers meeting at least twice per year.  All MnDot managers, around 200 people, come together. This last meeting was in Eagan, it was after a snowfall and I opened the meeting by saying I realized it was snowing so I wasn’t going to ride my bike, and there were two people that had just arrived by bike so really we should be doing it year round.

Now, you took this job – you brought a different kind of perspective from what we’ve seen in the past, in terms of MnDOT being a highway department in the past and a transportation entity or organization now and into the future.  As you may know minneapolize is a cycling advocacy blog  – I’d like to get, in general, your view on cycling in the Twin Cities but also around the state in terms of what you’ve seen.  What you’re encouraged by, and what you’re discouraged by.

Well first, it has been really gratifying being part of the department of transportation which came together in the 70’s as a collection of a lot of different transportation modes, and culturally they’ve been living in their own mode, aeronautics, freight, railroad, ports.  Highways and bridges dominate the agency but it has been very exciting because I think we’re pulling together with one multi-modal vision, and that is that all these modes fit together.

In terms of both passenger individual, and freight movements, I can’t think of any trip which we call peoples’ individual A-to-B story that doesn’t involve going from one mode to the next.  You could walk to your car, that’s still to me two different ways. You might take a bus, which connects to a train which connects to the park and ride and the idea behind an integrated vision state wide is that we need to think as much about the connections as we do each individual mode and biking/pedestrian is obviously a great interest of mine, but also a tremendous connector of a lot of transit and even cars for employees traveling to work.

It is just part of this larger matrix of transportation and an increasingly vital one.  And I’ve been really surprised, delightfully surprised, that some of the greatest passion for developing this inter-modal multi-modal bike and pedestrian system is in Greater Minnesota.  I’ve seen it in larger regional centers and I’ve seen it in our smaller towns but what it says to me is both that this is a generational shift, but also it’s one where communities are seeing the facts of the boost to their economy. It really is a true economic development factor around making bicycle centers. Livability really matters to communities, not just because it’s nicer to live there but because it attracts people and businesses.

So we see MnDOT in our new vision, is to have a multi-modal system that maximizes the health of individuals, the environment, and our economy so when we think about that overriding vision for our agency, bicycles kind of fit right in to the center of what we are, which is a system that helps support peoples lives as opposed to frankly, sometimes it feeling the other way around.

So you’re working currently for a democratic governor in a democratic administration, I think it’s safe to say that cycling in the past has always been thought of as a progressive left wing idea but in Indianapolis where they just built the 13 mile cultural corridor which is a huge addition to the city and was very expensive. It was started and promoted by a republican mayor.

What I’ve been saying is transportation is generally bipartisan and is as much generational as opposed to political. There is growing acceptance to each individual mode and biking, as it’s grabbed more mainstream attention, is not just a nice recreation or exercise, but it’s an affordable and environmentally sound way of getting around.  And I think there is a litmus test which is having it embraced by as many businesses as a good (ed. Transportation) alternative.  And I think that, you know, we do have a democratic governor and I certainly care about it personally, but I think it is here to stay.  No matter who is the administrating agency or government, because that’s what people want.

Lastly, I’m very excited about the Mississippi River Trail. So many of the cross country trips in the US seem to go from the west coast to the east coast, but I would love to ride from Itasca down to New Orleans and right now so much of that trail is on roadways some of which have wide shoulders, others which have not so wide shoulders and will challenge even very confident cyclists as well as those that would like to ride more if there was a safe place to do so,.  Do you envision, or would you like to see much or all of the MRT – even nationwide – going to a dedicated non-motorized trail?

Oh I love that, and I think it’s good to keep an eye on that type of vision, and that’s it, you put your finger on the challenging part of developing a larger, even a state wide system, is that there’s always those gaps where there’s no good shoulder or pavement options, but having said that, transportation systems took a while to be built and they take a longer time to evolve but unless we kind of keep an eye on the goal we’ll never get there.  As we’ve seen over the past 10 years a lot of those gaps have been filled.  So I think that over time particularly focusing on a few key corridors like the Mississippi river trail and some others, we’ll get there.  But it’s…

So maybe your next managers meeting will be in New Orleans?

Do you want to lead that trip Tony?  I’ll have to take a bus to start it off, I’ll ride the last 80 miles.

I promise to keep the speed at 12 miles per hour. It’s all down hill from here to New Orleans anyway right? Well thanks very much.

Thanks Tony, it was fun talking.