Dinkytown has been in the news again recently about a large-scale redevelopment proposal on one of the core blocks. There is much controversy over density, lost parking (perceived or real), and preservation. Those are all relevant issues with no absolute right or wrong answer but some very good possible solutions. But let’s not forget the pedestrian realm and the building facades that face it. By that measure, we need to send the Doran Companies proposal back to the drawing board, since adding a new curb cut and a large garage door, plus a transformer, facing 4th Street, is unacceptable.

Much has been written about preserving the character of Dinkytown, and in fact last week’s decision by the Minneapolis Heritage Preservation Commission confirmed that impulse. Yes, perhaps the buildings Doran Companies is proposing to demolish are not historically significant themselves, but to some extent all the Dinkytown commercial buildings together do have some historical significance. Furthermore, for the most part they are good cheap commercial buildings that can attract a wide range of businesses and have great frontage. I went by Mesa Pizza last night and diners lined the windows facing out as hungry pedestrians walked by outside. So yes, preserving at least the Mesa Pizza building and somehow blending the hotel differently is something that should be considered. It may be physically and/or cost prohibitive, but worth consideration. If the retail facades and number of doors cannot be improved upon, then maybe they should be left alone. 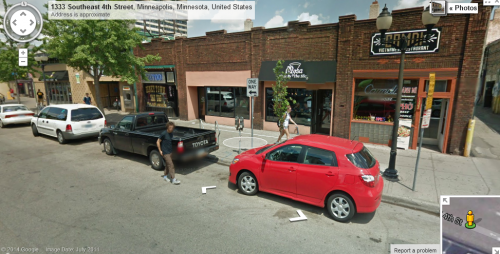 Here is the tally: the Doran Companies proposal would replace a current four retail tenants (plus an upstairs clinic), a curb cut and underpass that also provides a pedestrian entrance to an upstairs tenant, a cash machine, five doors and lots of windows facing the sidewalk with two retail tenants, a hotel entrance, lots of windows, a slightly shielded transformer (not the toy kind) and a garage door with a new curb cut in a different location. By that measure what exists today is significantly more pedestrian-friendly and a better public realm than the proposed development.

A second-story outdoor patio is proposed (above), but why should hotel guests (the private realm) get a patio when immediately below it the sidewalk (the public realm) gets a garage door, vehicle access and curb cut? Doran Companies is proposing to demolish a house on 13th Avenue, replacing it with parking, so perhaps the vehicle access can be via that street and the garage face the alley, rather than off 4th Street. As well, can’t the transformer be relocated so as not to be facing the sidewalk (see below)?

There is a lot to like about the Doran proposal. A Dinkytown hotel would be an asset, and certainly would add pedestrian traffic. Overall, you can make the argument that total pedestrian traffic of the new development would be about the same as what’s there today. I for one don’t mind the density. It’s just that pedestrians walking by would have a degraded environment from today. What’s more bothersome is all the city codes currently allow this, so essentially the city is legally allowing worse urbanism.

So let’s not let preservationists, NIMBYs and developers have the only say on this matter. Their views are important, but so is pedestrian character of Dinkytown. To me, that is worth saving and improving upon, not diminishing. The Doran Companies proposal, as is, represents a step backwards for the public realm in Dinkytown and Minneapolis, as it has fewer storefronts, fewer pedestrian doors, a new curb cut, more garage doors and a transformer. Luckily, these problems with the initial proposal likely have solutions. The Planning Commission and City Council need to insist on and offer assistance with creative solutions so the urbanism and public realm of Minneapolis is improved.

19 thoughts on “Save Dinkytown’s Public Realm”