When I watch films, half the time I’m watching for urban design. There are so many richly imagined cities and worlds in film. Outside of dreams, it’s a rare chance to mentally inhabit a fantastic possible city.

For example, in film noir, I’m able to go back to a pre-post-WWII America (e.g. Pickup on South Street, Chinatown). 19th century period films take me back to a pre-Automobile society (e.g. Lincoln, Gangs of New York, anything Merchant Ivory…). Science fiction films offer so many possible social visions, from Star Trek to Idiocracy to Mad Max.

On that ground, Spike Jonze’s Her is fantastic. The way in which the urban backdrop tells half the story reminds me of Cuaron’s (1996) Children of Men, another of my favorite mise en scene masterpieces.

Here are a few of the interesting urban qualities of Her: 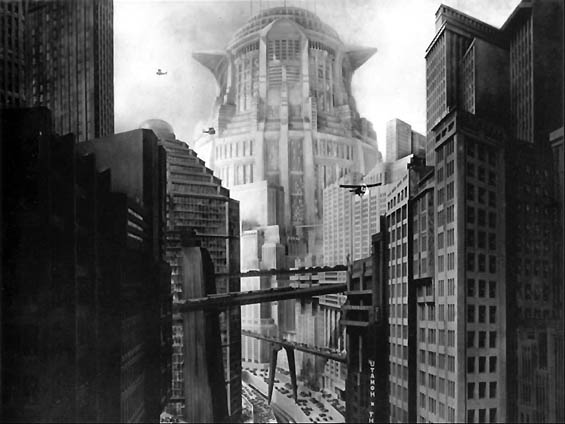 The ruling towers of Lang’s Metropolis.

The entire story of Her takes place in a wealthy utopian world without even a hint of poverty or strife. Her’s urban enclave reminds me of the garden from Fritz Lang’s classic sci-fi fantasy Metropolis, Tyrell’s palace in Blade Runner, or the Tate Modern  in Children of Men. And just like in those films, I have to imagine that there’s a teeming, dirty underworld lurking just out of the frame, a cyberpunk city overflowing with diversity and despair.

In fact, the only sense you get of the great proletariat supply line is one Burtynsky-inspired scene depicting a massive yard filled with shipping containers, seen from the window of a passing high-speed train.

Where do they come from? What does a factory in Her China look like?

Much of the “action” in Her is Phoenix’s Theodore talking to himself/Johanssen’s Samantha while strolling around a downtown L.A. populated only by shiny condo skyscrapers and seamlessly connected via skybridges (a.k.a. uncovered L.A.-style skyways). Many of these very closely resemble the New York’s high line.

And just like the downtown Minneapolis skyways, Her’s skyways are isolating quasi-public spaces. On the “streets” of Her’s L.A., everyone is on their way somewhere, solipsistic and oblivious. The world resembles nothing more than a massive luxury shopping mall, something you might find in Dubai.

(In Her’s defense, there IS one scene featuring a street performer …)

The subway station from Total Recall.

Tranpsortation in Her’s world is one of subways and high speed trains. None of these trains are particularly full, and they are all smooth and luxurious.

The subway stations are elaborate beige tunnels, and remind me somewhat of the subway in Total Recall (the original, not the unforgivable remake).

The trains glide smoothly through the world of Her, taking Theodore from the beach all the way into a lonely cabin in the mountains without even a hiccup.

And the most interesting thing is that, in the world of Her, there are…

There are no cars in Disney World either…

Yes, that’s right. This might be the first (non-space) science fiction world that features a complete ban on cars. Theodore gets everywhere on foot or on a train. The skyway/skywalks rise above the grit of the street, and smooth elevators and marbled interior office spaces greet Theodore at every step.

There’s even a scene, at one of the emotional turning points, where Theodore lays on the actual (non-skyway) sidewalk in despair. He lays in front of what surely must be an absolutely empty parking garage.

Where did all the cars go? This is what the movie is all about. Computers are everywhere. Obviously, this is the key to the film, an sexy existential extension of the human/non-human questions raised by Blade Runner.

But I like to imagine an alternative version of Her where, combining the the cliché about “America’s love affair with the automobile” with the ubiquitous hoopla surrounding robot cars, we get a Knight Rider-style love affair between a lonely man and a robo-car a la J.G. Ballard.

At any rate, Her is well worth watching from an urbanist perspective. (It’s also a good film even if you’re not interested in urban design, especially compared to the rest of the highly-touted cinematic schlock this year…)

While not a political film, the world that Her creates subtly raises the question of class in an urban utopia. It’s brings to life a car-less world of smart phones, “High Line” architecture, downtown condos, and high speed rail. This is a conflict-free world of smooth spaces, a disembodied city without class, money, or public interaction.

At the same time, Jonze’s film does beg the question about whether walkable, green urbanism can exist in a bubble. You have to ask yourself, “Would you want to live here?”

The not-quite sunset at the end of Her.