If you’ve used Google Maps in the past month, you may have noticed that some parts of the Twin Cities are looking mighty different. Google recently updated their high resolution aerial imagery, revealing scores of new buildings and infrastructure projects under construction in Minneapolis and St. Paul. If you’re zooming in for a close-up, you’ll want to disable the 45º view option. That angled imagery is from spring of 2011. The very latest top-down imagery is from September 2013 and replaces a previous version from fall of 2011.  Let’s take a look around the Twin Cities and check out some of the most obvious changes. Having the older 45º view is actually pretty handy for making comparisons, so you might want to go exploring before that imagery gets an update as well. 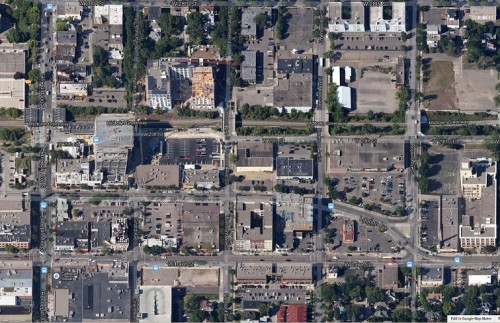 Over the last few years, development in Minneapolis neighborhoods like Uptown, North Loop, Dinkytown, and Stadium Village has been occurring at breakneck speed. The total project value of building permits issued in Minneapolis exceeded $1 Billion in both 2012 and 2013, reaching levels not seen since the year 2000. Post-recession, just a handful of new projects were underway in early 2011, including Mozaic West and Flux in Uptown (image above). Flash forward to fall of 2013 and you’ll see more than a half dozen ongoing construction projects in the same image. The new Walker Library is nearing completion, The Walkway has replaced Cowboy Slims, and the three-block Elan Uptown project is about halfway complete (image below). 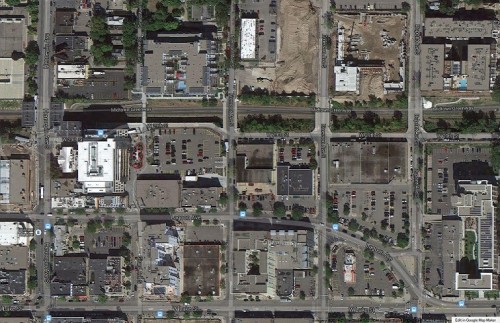 Over in North Loop, there (surprisingly) wasn’t anything  cooking in early 2011, but for the past two years development has been at a rapid boil and shows no signs of cooling down. I won’t list every project, but I’ve added arrows to the photo pointing out the new additions. At the bottom of the image below is Target Field Station, formerly known as The Interchange, which will open to the public on May 17, four weeks ahead of the Green Line opening.  Head further north to see the path of destruction left behind by the North Minneapolis tornado of May 2011. The scar remaining on the landscape over two years later is truly remarkable. 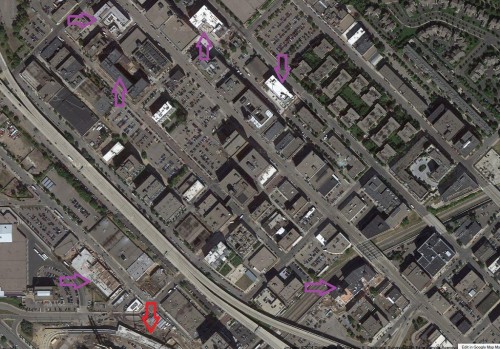 Speaking of the Green Line, the two different versions of aerial imagery perfectly capture the line under early construction and at 97% completion. Areas of note include the U of M campus (both East Bank and West Bank) and Lowertown St. Paul (Union Depot, LRT Operations & Maintenance Facility, Saints Ballpark site, US-52 bridge, etc.) 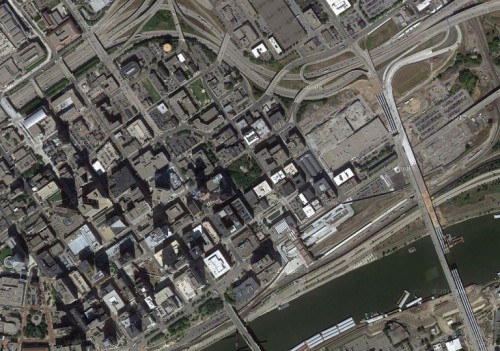 Thanks for reading my first streets.mn post. Next time, I want to dig deeper into development in Minneapolis’ North Loop neighborhood and take a look at what lies ahead (hint: look at all of that surface parking). In the meantime, keep exploring Google Maps and share your finds in the comments below. Hopefully, two years (or less) from now we’ll be equally impressed at the amount of urban infill development happening in the Twin Cities.