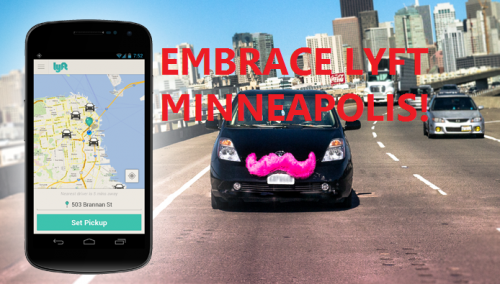 Minneapolis is almost one step closer to joining the 21st century. After months of dragging its feet, it should opt to do the inevitable: allow Lyft drivers to pick-up people within its borders. Well, the City is in the progress of making that happen.

It was 2004. I remember looking in awe at the price tag of college textbooks: $100 for an introductory of macroeconomics textbook? I begrudgingly bought the book – a used copy no less – from the college bookstore and proceeded to use it (maybe) a dozen times throughout the semester. At the semester’s end, I brought it to book buy-backs only to find they’d upgraded to a new edition and weren’t buying back copies.

Shit. I remember feeling cheated. Like, the system was rigged.

Upon the recommendation of a friend (thanks Adam!), I decided to check out Amazon.com. I listed the book and sold it for like $75. I didn’t make money on the deal, but it was better than the alternative. Eventually I started selling my old textbooks.  When that wasn’t enough, my friend and I noticed the college bookstore would discard literally hundreds of “outdated” textbooks each month on a table with a sign that read, “free books.”

We’d grab our backpacks and laundry baskets, fill them up and list everything on Amazon. The college provided free packing materials at the time, so our cost was virtually nothing. I made around $3,500 the first semester and a couple thousand the following semester before the University started donating to Books for Africa.

To this day, I still sell books on Amazon. While my margins aren’t as big as they once were, I still capture value from something that I would never have prior to Amazon. The downside to all of this is that me – and countless hundreds of thousands like me – are putting stores out of business.

Technology disrupted the traditional marketplace. Cities can regulate against change, but here’s the catch: they can’t be ignored for long.

Lyft. Uber. Sidecar. Airbnb. These are technological disruptions to the status quo that cities are struggling to handle. While other reasons are often cited, this delay often comes down to money, and who gets it. For example; car services; while cities don’t balance a budget on taxi cab fees or taxes, the revenue they generate is not insignificant. When it comes to App-based ride-sharing services, cities like Minneapolis (or Seattle and even Paris) get little in the way of revenue.

Getting started in the taxi business can be expensive. In Seattle, getting started will cost you at least $50,000 for a license. In New York City, a “medallion” can run upwards of $1 million. The cost in Minneapolis is more sane, but the number of taxi licenses are limited. At best,  it’s protectionism by keeping the old guard propped up under the disguise of safety  At worst, it creates scarcity and a monopoly develops. [Note: If anyone in the process is getting pinched, it’s likely taxi drivers who are subject to regulations and an out-dated “medallion” system. They aren’t paid well, need to jump through all sorts of loops, have a dangerous job and little job security].

I can’t remember the last time I was happy about taking a taxi. If your cab shows up, the experience usually goes like this: it shows up late, the backseat is messy, the ride costs too much, the driver won’t take a credit card and insists his machine is broken and doesn’t have proper change.

I’ve used Lyft a handful of times, and it is, hands down, a superior service. It’s more reliable, more affordable and more comfortable. Unless given no other alternatives, I will likely never take a taxi again.

In many regards, Lyft is doing what Amazon did in the mid 2000s: it creates harm to the establishment for the benefit of the masses. Taxi cab drivers will need to either adapt or risk having to find a new job. The upside is that a lot of people like me can make $200 on a Friday shuttling people around. The downside is that people with full-time jobs in that industry are without one. It’s benefit to the many with little regard for the few.

These new services aren’t going to solve our transportation woes, but they are another tool in the toolkit. If a weekly Lyft ride helps just ten people ditch their own car, then I say it’s probably worth it.

Airbnb is in the same. While I haven’t had many negative experiences staying in hotels, they get expensive after a few days. If you need a place for 4 or 5 days, hotel price tag can add up. I was in Louisville last October, stayed in a loft with a few others for an extended weekend and my bill was a $110. That’s not bad. It was as nice as a Holiday Inn, but $250 cheaper.

The tax implication: the City of Louisville gets nothing. If I stayed at the Holiday Inn, they’d be getting a lot more (hospitality taxes are usually high – upwards of 13 percent). Louisville got nothing, but a person willing share a spacious loft gets $660 for an extended weekend. That helps cover the mortgage, homeowner association fees, etc. There’s some benefit there, but from the prescriptive of local government, it’s very indirect.

Here is the technological disruption that is occurring: direct vs. indirect economic benefit.

Every book I’ve sold on Amazon is a book that would otherwise have been sold elsewhere. Instead of someone buying it at a bricks-and-mortar establishment that provides jobs and pays taxes, they’ve chosen to save a little and put $10 in my pocket. It’s a system that has drastically effected a small number of people, but marginally benefited a great number of people.

The response isn’t to ignore, but to embrace. Update the city code, and in the meantime,  also make sure taxi drivers aren’t being pinched in the process. Make Lyft, Uber and Sidecar viable, but also make it easy to be a traditional taxi cab driver. If this happens, there is a space in the marketplace for everyone.