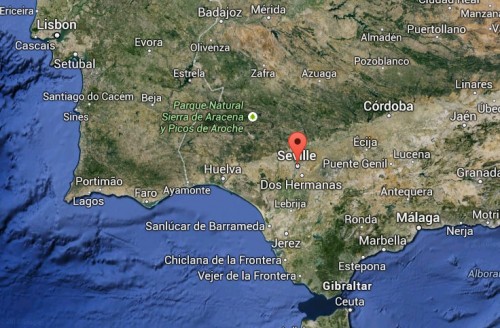 This post starts a series for my newly launched 2014 EU BICI (European Union Bicycling Information Collection Initiative). Over the next months I am travelling to some of the EU’s most interesting cycling cities, including Cambridge, Berlin, Seville, Ferrara, Zurich, and the usual Northern EU suspects. Each city will have its own post based on personal observation, secondary data, and interviews with local officials (when available). My aim is to uncover insights about structural peculiarities that are endemic to each city’s cycling network, not just to report the usual statistics and generalizations. Individual posts will not make direct reference to transportation issues in Minnesota; however, the culmination of the series (likely in summer) will result in an integrative and summary piece to distill key lessons and apply them to cycling in the Twin Cities. 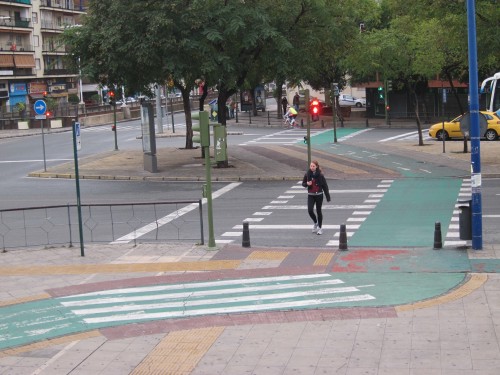 When one thinks about cycling in cities and Europe, all eyes turn north. But at least two cities within 80 km of the Mediterranean Sea—Seville (Spain) and Ferrara (Italy)—provide opportunities to avert our eyes south. Cycling and Ferrara have been married for more than a century (the next post). But this week’s entry, Seville[1], has made valiant cycling strides in just six years. Their strategy clearly borrows from the Dutch for inspiration (i.e., separate cycle paths appear to be the divine wisdom); and, their relative ‘overnight’ stardom deserves attention. 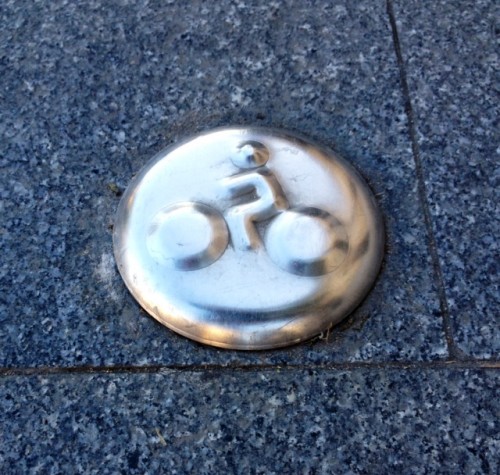 Silver medallions, with a bicycle imprint

Almost all noteworthy cycling cities have taken an evolution strategy[2]; they incrementally chip away. Seville is testament to the contrary: REvolutionary actions. Turning into the 21st century, cycling in Seville was all but non-existent (0.2% of trips via bike). Political swings aimed to change that; the newly elected parties aggressively carried cycling in their portfolio[3]. They diverted €10M from various urban development surcharges and complemented it with €18M from the general transportation budget. Recasting Daniel Burnham’s quote toward bicycling (“make no small plans”), the growth of Seville’s network is what he envisioned. The city blazed a new system of bicycle facilities starting in 2007, most of them laid out in only 36 months. These are not the usual U.S. variety consisting of a stripe here and some directional signs there. They built a network of more than 150 km of bi-directional facilities—2.5 meters wide (mostly)—that crisscross all over town. The city carefully selected eight main routes to serve as the backbone to connect the historic center with outlying activity centers. These corridors benefited from raised crossings, additional barrier treatments from cars, and cycling-specific lighting features. From the start, connectivity of the system was a top priority and other routes backfilled to blanket the city. 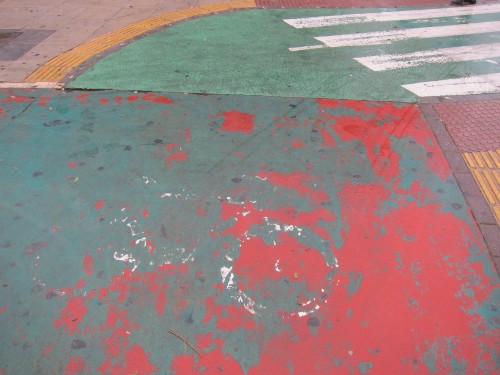 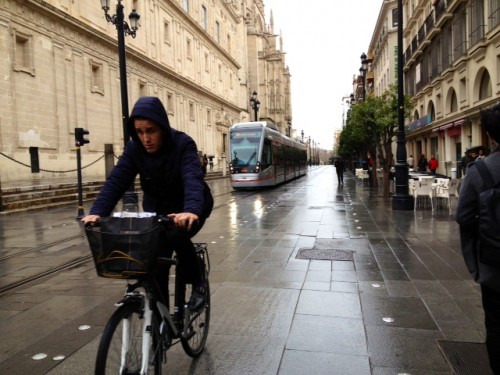 The suggested bicycle route in the historic center (marked by the medallions), adjacent to the tram and the cathedral.

The strategy for finding the space to install the network is exceptional: they pinched car traffic for 85% of it[4]. Travel lanes were trimmed by one-half meter[5]; street-side parking bays were angled to become parallel, gleaning another 2.5 meters[6] along some routes. The city jettisoned car travel lanes as well as 2,600 parking spaces. The “Dutch inspired” result is a painted green[7] system that is largely separated from auto traffic, at least on major roads. The network now parallels more than 11% of all roads in the city[8]. Those aiming to fulfill the “Field of Dreams” quote[9] can sleep better with the large-scale evidence from Seville’s “experiment.” In less than a decade, adding 130 km of bicycle infrastructure correlates with daily bike counts that rose from 5,000 in 2004 to ~72,000 today. Current cycling mode share is just shy of 10%

The aggressive network infrastructure coincided well with the global bike-sharing craze, of which Seville was a JCDecaux pioneer. Starting from scratch in July of 2007, it has grown to 2,600 bikes spread over 260 stations with 5,000 parking spaces. Reaching its peak of 60,000 users in 2009, the system seems to have stabilized with 52,000 users who make 17,000 bike rentals per day. The garage 10km out of town serves as ground zero for the system, performing 20 ‘significant’ bike repairs ‘in house’ per day—those deemed too difficult for the 300 ‘field’ repairs per day[10].

Overall, the Guadalquivir River provided a solid and initial backbone for cycling. The mild climate (outside of July and August) allows comfortable riding and the flat terrain in every direction helps. Throw more than 58,000 university students into the mix and the key ingredients for cycling prosperity are already there. But in terms of size and density, Seville strikes a good balance. The city is big enough—a population less than 3/4 million—to have common distances that are not easily traversed by foot[11]; density hovers around 20 people per acre[12]. The compact historical center has no space for cycling facilities; tastefully placed silver medallions—with a bicycle imprint—suggest bike routes via the Cathedral and other historic areas. But it is the ratio of a relatively small historic core relative to the size of the rest of the city that works in its favor. Immediately outside the historical center, the wide rights-of-way are exactly what allows the network to shine (these are wide relative to what I have been living with in Italy for the past 8 months).

The aggressive infrastructure commitments, however, are now requiring attention—which is harder to glean from the new political leadership. The city council initially restricted non-resident auto access to the history center (thereby halving the number of cars); the new guard, however, has relaxed these restrictions, which lessens positive impact for cycling. The initially projected publicity revenues from the bike-sharing system are down, thereby suggesting financial stress. Cracks in the pavement, traffic signal repairs, and bike racks cost 300K €/year; 12% of that is devoted exclusively to keeping the green paint fresh. The green was considered crucial to make the initial splash; I question its existing value now and some around city hall are apparently doing the same. It is harder to find the resources to traverse difficult crossings, and add bicycle parking, launch public education campaigns.

The experiences in Seville suggest at least two takeaways. First, most Americans assume that European settings are inherently more bicycling friendly (e.g., tax structures and the sort discourage auto use). Closer to the Mediterranean Sea, however, bicycling’s climb for utilitarian travel becomes steeper, not always owing to terrain. Cultural hurdles and rising incomes get in the way. Second, Seville provides a glimpse for how a city dominated a decade ago above by cars and a burgeoning driving mentality (at least outside the historic center) can make aggressive in-roads for cycling. 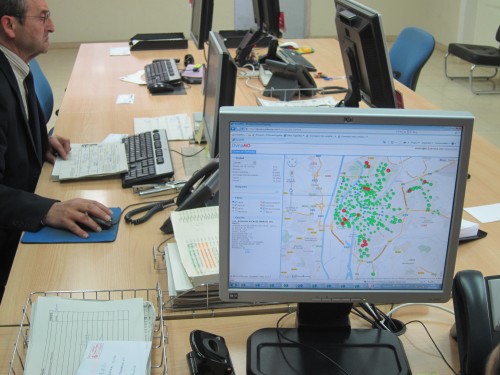 Real time surveilance for bikesharing stations in deficit of bikes.

[1] Much thanks to Virginio Moreno (Head of projects and works), Jorge Almazan Fernandez de Bobadilla (Director Tecnico, Genercia de Urbanismo), and Javier Paudo (Head of the bike planning department) for sharing their perspectives and relevant data and providing a tour of the garage for bike-sharing system.

[4] Where did the space come from, see 85% number reported in: Alliance for Bicycling and Walking (2012). BICYCLING AND WALKING IN THE UNITED STATES. BENCHMARKING REPORT, case study featuring Seville. pages 157-159. Apparently the other 15% came from pedestrian space.

[7] The early facilities were painted red but in 2005 the city put the color up for popular vote; the residents preferred green.

[8] Almost 11% of the roads, see: Virginio A. Moreno Lopez (2012). The first step in creating bicycle infrastructure—the case of Seville by bike. In the book: Cyclists and Cycling Around the World: Creating Liveable and Bikeable Cities. Edited by Juan Carlos Dextre, Mike Hughes, and Lotte Bech. Fondo Editorial.

[11] For example, Cordoba, more than 100 km down the road, could have a similar cycling flair. However, its smaller nature suggests shorter travel distances that are more amenable by foot; the inherent need for cycling is less.

4 thoughts on “Bicyle Infrastructure in Seville”