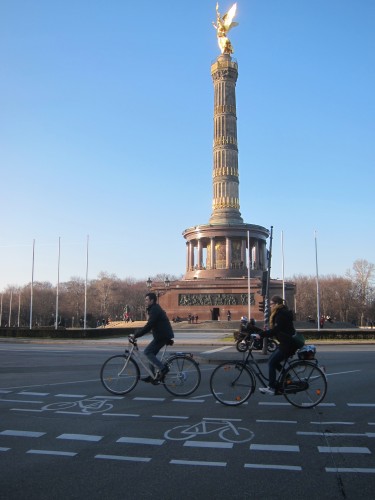 Prior posts from the 2014 EU BICI are available for Seville (Spain) and Ferrara (Italy).

Wide roads and dispersed development; a tradition rich in fast driving cars and a population cobbled from several cultures—these are not elements one associates with a city that generates 1.5 million cycling trips per day[1]. But for Berlin, these ingredients have helped, in part, to catapult its success in recent years.

The city is expansive with ~3.5 people spread over an area roughly 50 km by 50 km. Density is difficult to fully get your mind around for this multi-nucleated metropolis; on average, it is the lowest of all major urban areas in Europe[2]. One million live within the central area (the S-Bahn ring), home to most of the cycling; here, neighborhoods rule and some of them claim more than 20% cycling mode split. The city’s average, 13%, suggests other neighborhoods are considerably lower[3]. Heavy pockets of cycling activity appear to dominate in this mammoth city and cycling eyes are awaiting the news of a surge from the travel behavior counts conducted as part of an upcoming 2014 survey.

From an outsider’s perspective, it appears that the cycle network has, in part, benefited from the city’s leveling in WWII. Roads are wide. Some roads are a legacy of the 19th century Hobrecht Plan while others are showcase boulevards. But most streets were redeveloped post WWII and were expanded from their narrow confines. There are arguably more roads in this city—and more space in most of the rights of way—than anywhere in Europe. 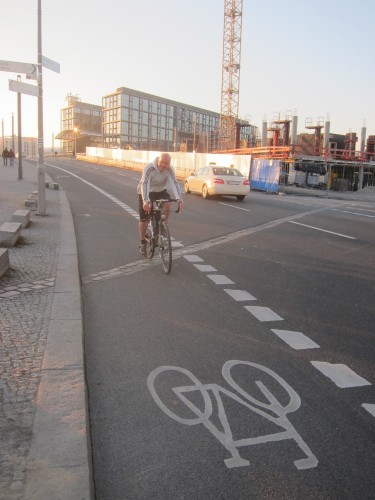 Germany’s largest train station in the background and the bike lane traversing the brick lane demarcating the original Berlin wall.

Mostly within this roadway space, Berlin has laid down a dizzying array of types of bicycle facilities—more than 1,000 km of them[4]. For even the learned eye, there are too many to accurately bin[5]. Twelve trunk routes form spokes to outlying areas. Different types of paths are everywhere. On one hand, the ubiquitous nature of bicycle treatment is good to see; on the other, their inconsistent nature—and so many of them—breads confusion. Though expansive, the network is far from uniform. Some of this has to do with east Berlin’s historical lack of wealth and remnant cobbled streets. They are catching up to some of cycling initiatives of west Berlin. But even in the west, bicycling treatments from years ago are juxtaposed with new German specifications that abide by the latest guidelines. The old and the new are not necessarily harmonized and there is no particular program for modernization. I thought the “Copenhagen” bike lane was relatively universal aim, but it does not appear to be a priority here. Some facilities using colored paint—an old strategy—are clearly left to pasture; colored paint is now apparently considered too confusing. Officials identify facilities built according to the old standards as a key problem.

The incongruity between the wide array of infrastructure treatments—and standards—is balanced by the city’s aim to make all streets comfortable for cyclists. There are more than 5,300 km of streets in the city; a whopping 72% of all of them are 30 km/h streets or zones. This is where Berlin’s cycling comfort lies: relatively slow trafficked streets. 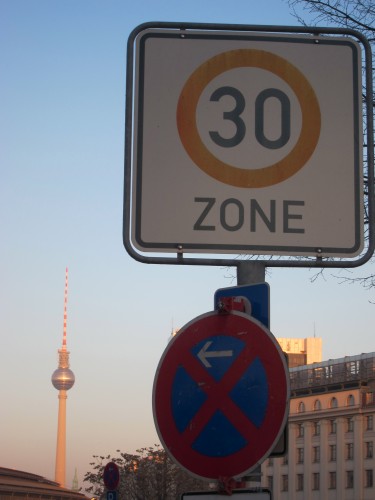 30 kph zones dominate 72% of all streets in the city

With an expansive city, Berlin has focused attention on integrating cycling and transit. It does not appear to be the 2-bike, one-transit trip model endemic to those smaller countries to west and the north (Netherlands and Denmark). Rather, we see the ‘bike on transit’ model. Passes are cheap; several platforms have mechanized ways of getting your bike up and down; bike space on the trains—and even the trolleys—is provided for at all hours of the day and night.

The politics of where cycling lies on the city’s overall agenda depends on who you ask. Relentless efforts took 30 years of pushing for effective cycling politics and integrating it into all transport policies[6]. High level officials within the police, road authorities, transport planners, and other offices contain convinced cyclists within their ranks. At the same time, some 6 years ago, the city jettisoned the bicycle coordinator position within the City’s senate and has not replaced it since. Cycling specific funding is reduced each year, though, a good chunk of cycling investment is from other budgets. Getting bicycle facilities in key areas involves intense politics. A big part of infrastructure discussions now involves redistributing space formerly devoted to autos via marked lanes.

The infrastructure and education campaigns have helped make a mark. But cycling’s rising prominence within Berlin’s transport portfolio is intricately tied to cultural infusion. Much of the pressure to the political leaders comes from energetic students and youth-oriented culture (almost 150,000 college students). For the urban youth, cycling is a way of life; their cycling enthusiasm is contagious. The city has attracted not only the young, but also the innovative and dynamic. This blending of cultures—almost one-third is of foreign origin[7]–yields a population not constrained by narrow sub-cultural influences. Bicycling is visibly thriving in this environment. 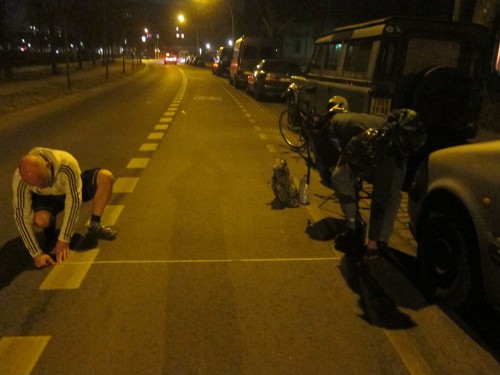 They take measurement seriously in Germany: Measuring the width of a new bike lane, ensuring it meets German standards. 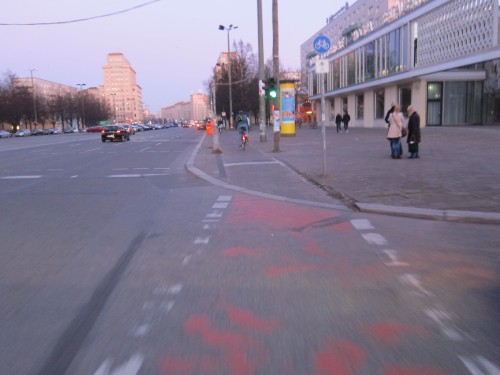 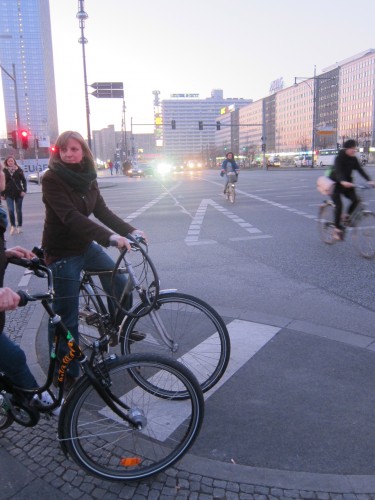 Half way through a “Copenhagen” left turn, while other cyclists continue forward.

The information and perspectives above benefited considerably from Tilman Bracher, Benno Koch, the Berlin’s former cycling czar, and Friedhelm Temath. Thanks to Benno and Friedhelm for the outstanding 15km tour.

[5] For example, statistics will tell you: 662 km structural cycle paths; 176 km bike lanes on the roadway ; 100 km common foot and cycle paths; 50 km on the sidewalk bike trails; 5 km footpath, cyclists free ; 80 km for the cyclist usable bus lanes; 400 km routes for cycling outside of the public land; 250 one-way streets in opposition to the direction of travel for cyclists free.

[7] 13.5 % of foreign nationals but almost 20% more are descendants of international migrants and have either become naturalized German citizens, see: https://en.wikipedia.org/wiki/Demographics_of_Berlin