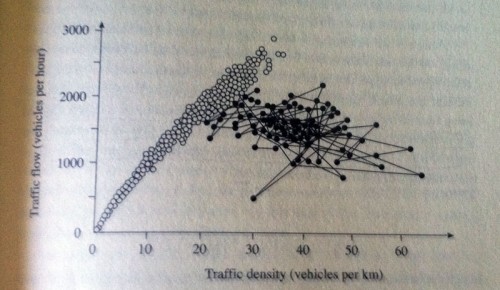 Caption: Vehicles diverging from the free-flow branch can sometimes follow a much more erratic time line, experiencing a wide and unpredictable range of different traffic states.

This is the last of the chart triptych about the nonlinear dynamics of traffic congestion, again from Philip Ball’s popular science book Critical Mass. Here he’s using a chart from a pair of German congestion researchers who looked at real-world traffic data on the autobahn (Kerner and Rehborn 1996). As Ball describes,

The general form of the results is similar [to earlier prediction models]: a free flow branch with a metastable region, and a congested branch splitting off from it. But the congested branch is a complete mess! Vehicles do not simply enter a jam that congeals out of free flow, slow to a near stand-still, and then accelerate away at the end of it. Instead, their speeds (and thus the overall flow rates) vary considerably once free flow has turned into congestion.

The point is that traffic jams remain mysterious! Your frustration while sitting in them is justified, as traffic doesn’t seem to follow strict rules for how they behave. I don’t really understand all the variables, but it gets pretty hairy with computer models, mapping patterns real time data, and different kinds of models depicting the “fluid” dynamics of traffic flow along various phases.