For some time I’ve maintained that riding a bicycle safely on the road in the U.S. is, relative to driving a car, fairly safe.

My reasoning was based largely on statistics indicating that bicycle fatalities generally make up about 2% of all road fatalities in the U.S., a modal share of about 1% (EG, about 1% of trips are made by bicycle (vs walking, car, transit), and thus bicycling seems about twice as risky as riding in a car.

If you account for about half of bicycle fatalities being partially due to stupidity on the part of the bicycle rider then riding a bicycle safely should be somewhat safer than not—or maybe 1.2 times as risky as riding in a car.

I was wrong. Sort of.

What we want to know is how risky is bicycling vs driving—per mile or kilometer traveled. If I’m meeting someone for lunch at Paninoes which is two miles from my office, is riding my bicycle more dangerous than driving?

A bit of research provided some base data:

With which we can produce the following chart. 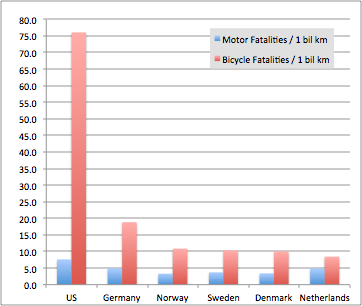 This looks ugly. Is it really ten times as dangerous to ride a bicycle in the U.S. as drive?

Perhaps not. This is raw data. Though fairly accurate for what it is, you must also know how many apples and oranges you have in each pot and where they came from. Understanding the underlying data is critical and there are two elements critical to this particular data.

Interstate oranges vs the Minneapple

The majority of bicycling is done in urban, suburban, and exurban areas and a bit on rural roads. The statistics above naturally reflect that[1]. The statistics for motor vehicles however include a lot of miles on rural interstates (or motorways) which are considerably safer per vehicle mile traveled (0.8 fatalities/VMT) than average (1.46 fatalities/VMT) and so skew the results a bit for this comparison[2]. We end up comparing riding bicycles in more dangerous suburban or built-up areas to driving a car on safer rural interstates.

Correcting for this as best we can from available data results in: 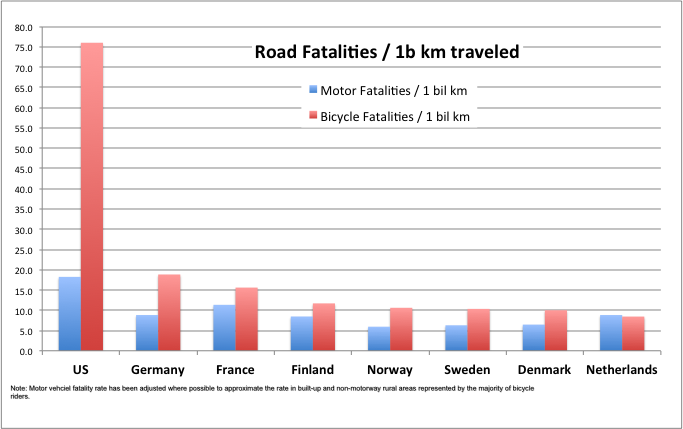 This is likely a more accurate picture of reality.

Bicycling on the road in the U.S. now appears only about five times as risky which on a nationwide basis seems likely.

How much do we really ride and drive?

The number of kilometers that we ride or drive has a big impact on these statistics (the denominator in our calculation) and are generally believed fairly accurate. Two though have been significantly questioned.

The most criticism seems to be how much people ride bicycles in Denmark which most research indicates is about 30% less than the 958 km/year indicated above. Modifying this would have an insignificant impact for our purposes here and I strongly prefer to not modify data unless necessary and supportable so we’ll leave it. 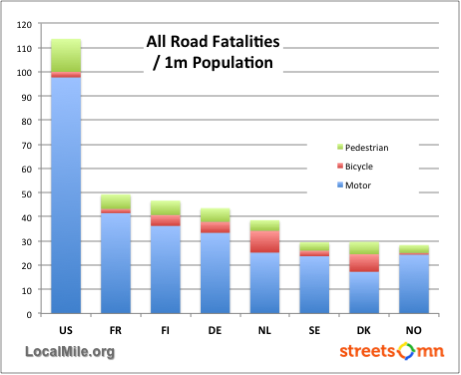 An important element related to how much we ride or drive is exposure. Individually, the more we drive, bicycle, or walk among cars, the more likely we are to be killed. Of much greater impact though is that on a societal level, the more we drive cars, which have proven to be quite deadly in most drivers hands, the more likely we are to kill others. These two combined are part of why we are over three times as likely to by killed as someone in Europe.
If we can reduce our rate of fatalities by half, save 18,000 lives each year, which would still be high by European standards, whose life will we save? Will we save the life of someone close to us? Someone who’ll have a great impact on our nation or on medicine?

How much we drive in the U.S. is likely less than the number used in the calculation above. According to some research this would result in 18 fatalities per billion km driven (making bicycling about 4 times as risky nationwide). This does have a somewhat significant impact, but I do not believe the data are reliable enough to justify changing it. It is worth keeping in mind later though.

Some might also question the 30km/year (18mi/year) attributed to Americans riding bicycles. Keep in mind that this is the average for every person including day old babies, nursing home residents, and folks who you’re pretty sure there is no bicycle strong enough to support. This is about 1/3 the rate of Norway, 1/10 that of Germany and Sweden, and a quarter higher than Spain which all seem reasonable if you’ve spent much time in these countries.

Double checks are good though. People in The Netherlands are about 61 times as likely to ride a bicycle for their primary mode of transportation as someone in the U.S. However, based on these numbers they only ride about 33 times as many miles. If anything the 30km number from Eurobarometer may be high. This could have a significant impact, but I have not found data reliable enough to support making the change and 30km/year does seem well within reason.

Next, there are four factors to consider that impact our safety individually even though they do not change overall national statistics.

Minnesota is a good choice

Minnesota is one of the safest places to drive and is believed to also be one of the safest places to ride a bicycle. In my own experience, drivers in MN are indeed quite considerate of bicycle riders compared to most other places in the U.S. Our fatality rate per VMT for cars is 0.9, about 2/3’s the 1.4 rate of the U.S. as a whole and well below places like MT, LA, or AZ. We can likely knock a quarter off of both U.S. bars for choosing to live in Minnesota.

Age is critical because elderly are considered far more vulnerable than others. In The Netherlands for instance, some number of bicyclist fatalities are attributed solely to elderly having heart attacks while they just happen to also be riding. Elderly are also more likely to fall and are more frail so in any crash have a higher likelihood of death. A crash that might keep a 35-year-old out of work for a day might kill a 90-year-old.

Reliable data on how much people ride in various countries by age has eluded me thus far. However, riding around The Netherlands you’ll see a quite significant number of elderly riding bicycles. Far more so than in any other country I’ve been in. Copenhagen, while seemingly not having as many as The Netherlands still has many more than we do in the U.S.

This anecdotal impression is reflected in fatality statistics. 64% of bicycle fatalities in The Netherlands are people over 65. In Denmark 31% are over 65 and in the U.S. 13%. Note also that in the NL 22% of all fatalities are people over 80 and in the U.S. 2% are over 80. Think about this in terms of our chart above for just a minute. Now, consider that they also live about 3 years longer than we do.

A secondary aspect of this is that the U.S. bicycling population is heavily weighted towards men between about 20 and 50 and this is also reflected in fatality and injury statistics. Do these riders take greater risks than others?

Of the 723 bicycling fatalities in the U.S. in 2012, about half include some level of stupidity on the part of the bicycle rider; riding on the left side of the road facing traffic, riding at night without lights (or reflectors), riding while drunk, and many others. 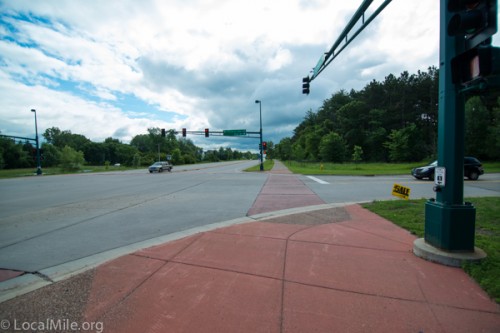 US traffic engineers discourage good choices. Like forcing you to wait two and a half minutes for a white crossing light at an intersection (Eastbound on Hiway 96 @ Rice Street) during which a total of three cars cross in front of you and 13 go through the intersection parallel to you but you don’t want to jump the red crossing light because you are unsure when the single car in the oncoming left turn lane will be given a green. How many will wait? How many will jump the light? How many will be hit by left turning cars when they jump the light?

With our bicycling and motor vehicle infrastructure well behind most developed countries we have little choice in safer places to ride. We do have a choice of how safely we ride (though making the safer choice may often be excruciatingly frustrating and nearly to the point of impossible sometimes given how our intersections and signals are designed).

When I ride to Paninoes for lunch I do so along a segregated multi-use-path or MUP for 1.8 of the 2.0 mile distance. This certainly feels much safer and based on what we’re seeing here and in recent studies is much safer.

Given a few problems with the path design itself, like no clear indicator of either its existence or who has ROW at parking lot entrances, the way the intersections are designed, and how traffic lights are programmed, we don’t have a system nearly as safe as The Netherlands and are a ways below Denmark and Sweden. But also not terrible.

I’d estimate that my 2 mile route to Paninoes from my office has a fatality risk rate of about 14 (fatalities / 1b km ridden). Or once every 11 million trips.

The 1 mile from my home to Dunn Bros or Festival Foods in Vadnais Heights includes no segregated infrastructure and is mostly on local and county roads with somewhat dangerous intersections. I still have the advantage of better Minnesota drivers however. I’d estimate the risk rate on this route to be about 35. Once every 9 million trips or once every 321 lifetimes.

Conclusion: I’ll Take My Bicycle. And a free beer. 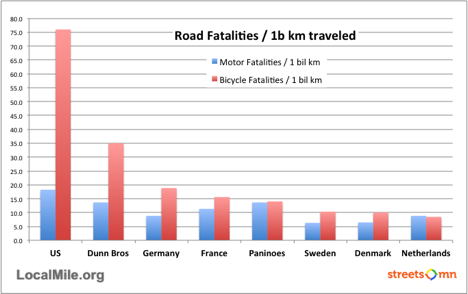 How riding to Dunn Bros or Paninoes likely compares

Riding to Paninoes has about the same risk as driving so that’s a very easy decision. And besides, the monetary savings and calorie burn more than cover a pint of Furious.

Riding to Dunn Bros is likely about twice as dangerous as driving. However, the health benefits blow away the risk. I’ll definitely benefit significantly from increased health by riding but I’m quite unlikely to be killed or injured.

Note that during winter the risk on Shoreview’s paths to Paninoes increases only very slightly and may actually be less than driving so I’ll do this throughout the year. The ride in Vadnais Heights to Panera on the other hand increases dramatically, to perhaps 400. Our bicycles at home in Vadnais Heights get put away for the winter.

If it seems like risk can be assessed on points, you’re right, as long as you don’t want extreme accuracy. But that’s another post.

Keep in mind that this is all relative. Riding a motorcycle, statistically, carries a higher risk than anything we’ve discussed here. Pedestrians in the U.S. also are at greater risk. High school sports like football, cheerleading, and diving are all riskier than riding a bicycle on our roads.

[2] Rural 2-lane roads are likely the most dangerous of all types, exurban surface next, then suburban surface, then metro highway, then urban surface, with rural interstates (motorways) the safest.