The City of Minneapolis can salvage the Hiawatha Crosswalk “Improvement” project. All they have to do is send out a traffic engineer to reprogram the signals so the Walk signals automatically appear. Pedestrians deserve the right to an automatic Walk signal, particularly in a city-designated Pedestrian Overlay Zone near the Blue Line, a nearly $800 million transit investment that is approached on foot by every single rider. Hundreds of pedestrians cross Hiawatha Avenue every day, and not just to access light rail. We deserve automatic Walk signals. 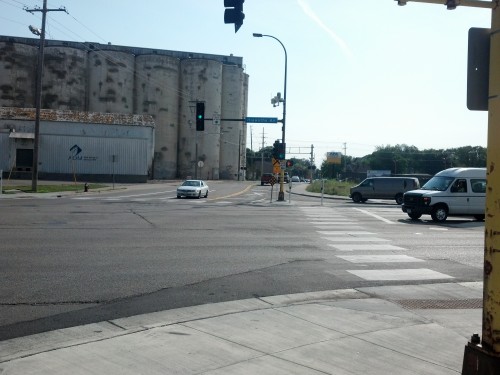 An early review of the pedestrian “improvement” project appeared on this site in July. As you can see, the results of the project are mixed. The stop bars and freshly-laid crosswalk stripes are underwhelming but effective, provided the paint is maintained. The completion of the crossing along the south side of 46th Street has seemed imminent for three months and counting (finish the job!). 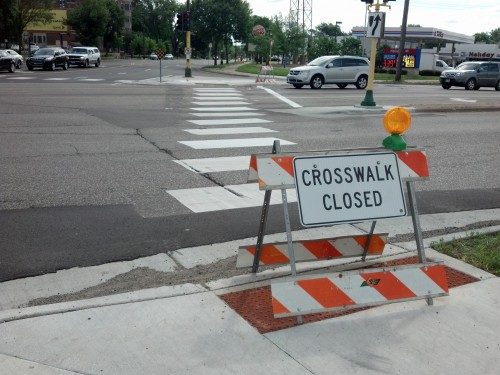 That said, the project was mostly finished in June, subject to installation of new pedestrian beg buttons. And here is the rub. For approximately one month, from mid-July to mid-August, prior to the installation and programming of the new beg buttons, the signals at 38th, 42nd and 46th Streets were set for Walk signs to automatically appear. No application or beg button pushing required. And they worked splendidly! And the sky didn’t fall! And traffic wasn’t perpetually backed up as a result! Dignity for the pedestrian. 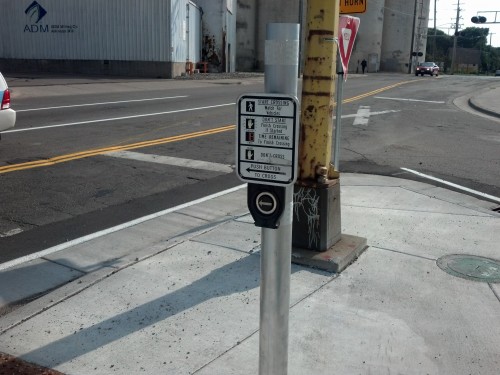 Then one day I headed home after dropping my son off at preschool and there he was. A city traffic engineer (uh, oh!), his Public Works truck parked on the curb, was busy at work on the traffic box, reprogramming the signal to require begging by pedestrians in order to cross the street. He was simply doing his job. But the crazy thing is, of all the items officially asked for as part of this project by the Standish-Ericsson Neighborhood Association and the Minneapolis Pedestrian Advisory Committee, this is one thing that didn’t require a $10 million upgrade; it just required a traffic engineer to come out and reprogram the signal to allow Walk signals to automatically appear. Which they did, for an interim period of one month prior to installation of beg buttons. How absolutely nuts is this scenario!? The interim condition provided the actual solution, whereas the final, expensive fix actually made things worse for pedestrians. I believe this is the exact definition of irony – “an outcome of events contrary to what was, or might have been, expected.” 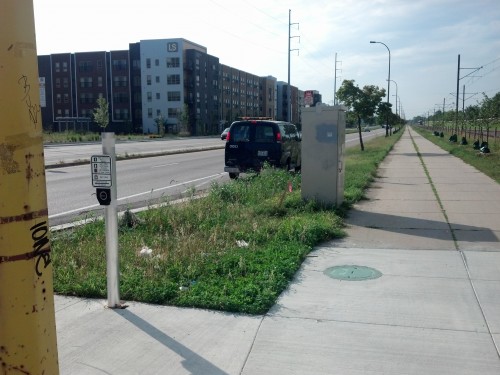 As easy as it was for the traffic engineer to come out a few weeks ago and program the signal at 38th Street and Hiawatha Avenue so that the crosswalks signals don’t automatically display a Walk sign, he could drive back out here some day (today!) and change it right back so pedestrians no longer have to suffer the indignity of begging to cross the street. While he’s at it, why not add Leading Pedestrian Intervals? Pedestrians are not second class citizens. The City of Minneapolis and Hennepin County must stop treating us as such. It is time to prioritize pedestrians rather than merely accommodate us. The solution is so easy, and we already tested it for a month this summer (albeit inadvertently), so let’s just get it done!

20 thoughts on “Minneapolis Can Salvage the Hiawatha Crosswalk “Improvement” Project”