As I’ve worked on walkability surveys of routes to Green Line stations over the last few years, one of the issues consistently raised by community members is the need for more benches at bus stops and along major arterials, to provide places to rest, especially for seniors and people who use canes or walkers, and parents with young children.

Though not the top concern, almost all survey participants commented on the dearth of benches in Saint Paul and saw it as a barrier to walking, (The number one and two concerns are 1. the condition of sidewalks — uneven or missing — and 2. traffic going too fast and not yielding to pedestrians crossing at corners, as required by law. See http://dcc-stpaul-mpls.org/special-projects/walk for Green Line Walkability Reports.)

Most of the benches in Saint Paul are located at bus stops or in parks and plazas in the downtown area. Unfortunately, the standard bench design for bus stops is extraordinarily ugly, with clunky concrete bases and advertising all across the back. Worse still, many bus stops have no benches at all, and bus shelters are few and far between, a substantial deterrent to riding transit in winter. Metro Transit is currently in the process of reviewing and revising their policies related to bus shelters, to expand the numbers of shelters and ensure equitable distribution. 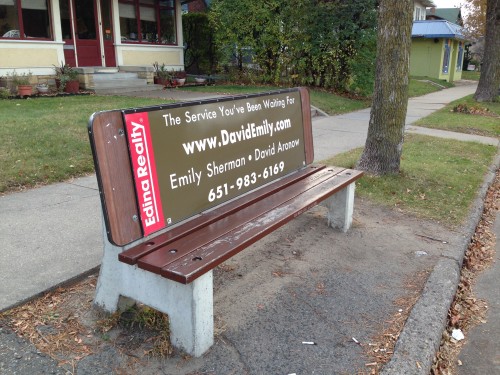 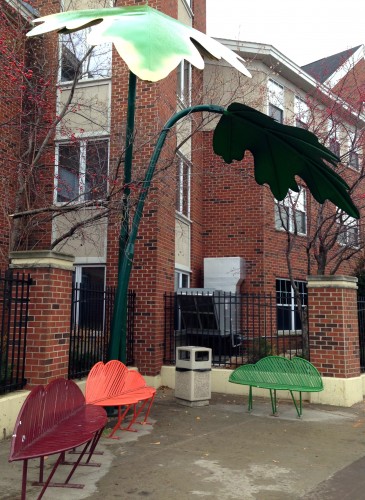 One group that focuses on encouraging people to get out and walk “as a form of transportation and to increase physical activity” is Active Living Ramsey Communities (ALRC). Recognizing the need for resting places along neighborhood walking routes, “especially for the elderly, disabled and those with very young children,” ALRC in 2007 initiated the Be Active! Be Green! Bench Program to install benches along neighborhood walking routes.

The program began in Saint Paul with the installation of 13 benches, made of recycled materials, from Rondo Library to Western Sculpture Park, linking people to transit and other local destinations. After stalling for a few years, the current plan is to use the remaining dedicated funds by the end of 2015. The cost of installing each bench is $1200, with half to be paid by Ramsey County. This is a great opportunity for community organizations, in collaboration with the City and the County, to expand the number of benches in Saint Paul. For additional information, see here. 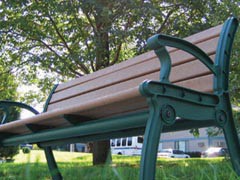 Be Active! Be Green! bench 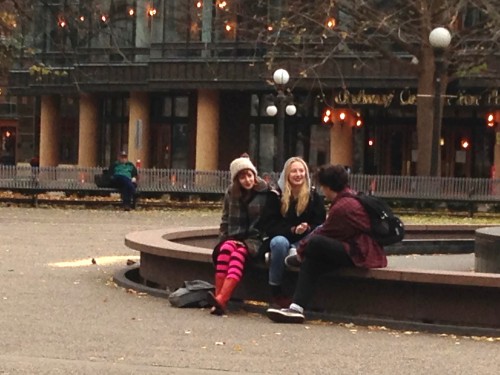 Rice Park — girls sitting on the edge of the fountain, man on a bench in the background 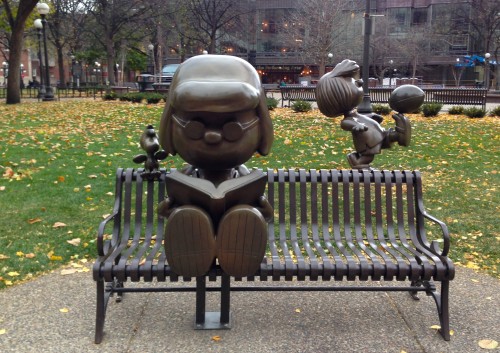 On a recent trip to New York City, I was struck by the enormous variety of benches along the newly opened northern section of the High Line. This allows people to walk at their own pace, enjoying the Hudson River on one side and midtown Manhattan on the other side, with the rail yards stretching out below. As Saint Paul seeks to become more walkable and welcoming, we might want to consider expanding our repertoire of seating choices as well, both in parks and along walking routes throughout the city, from one neighborhood to the next, along the bluffs, by the lakes and the Mississippi River, to churches and schools, shops and restaurants, farmer’s markets and sporting events. 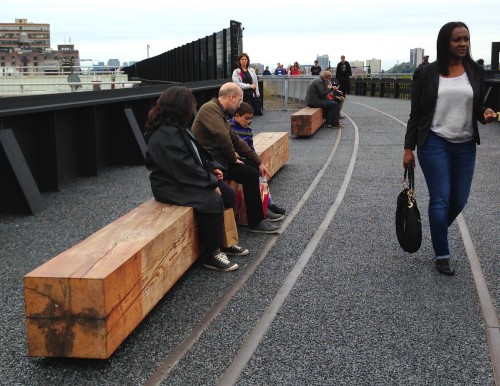 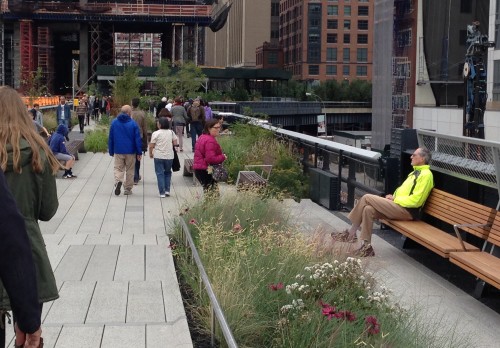 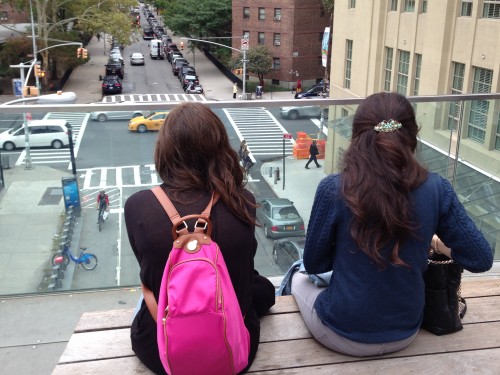 Perched above the street on the High Line, two girls watch the traffic go by

Saint Paul is a wonderful city, full of interesting streets and neighborhoods, many of which are best enjoyed on foot. If we want to encourage more people to walk, we’ll definitely need more benches. And we’ll probably also want to consider providing tables and chairs in public plazas, to create gathering places where people can get together with a friend, work on a computer, read the paper, or simply watch the people go by. In New York, there are vast areas of the streets that have been reclaimed and filled with tables and chairs, public spaces that are free for people to use, without having to buy anything to sit there. The recent expansion of outdoor seating areas for restaurants and bars in Saint Paul demonstrates that there’s a demand for this type of outdoor seating here as well. Now it’s time for the city to develop some public spaces with tables and chairs to bring people together and enliven our streets and plazas. Here are a couple of examples from New York City and from China. 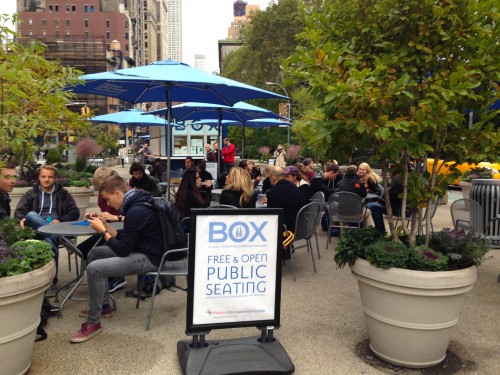 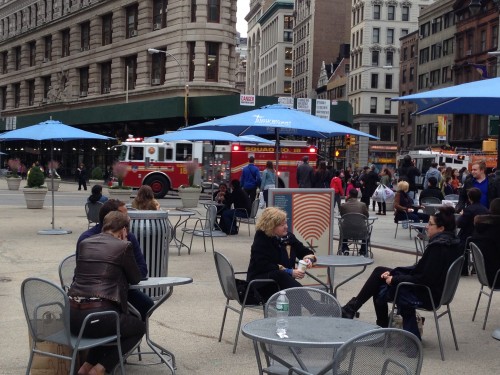 Two views of the Madison Square Park plaza where chairs and tables fill part of what used to be Broadway, where it intersects with Fifth Avenue by the Flatiron building 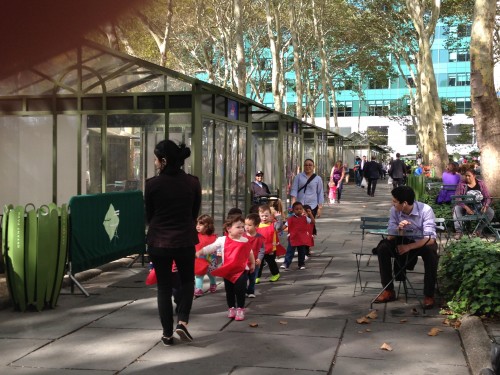 Tables and chairs line a walkway in Bryant Park, a perfect spot for people watching

Going further afield, to China, the tables and chairs are made of stone, but still serve the function of bringing people together in a public space. 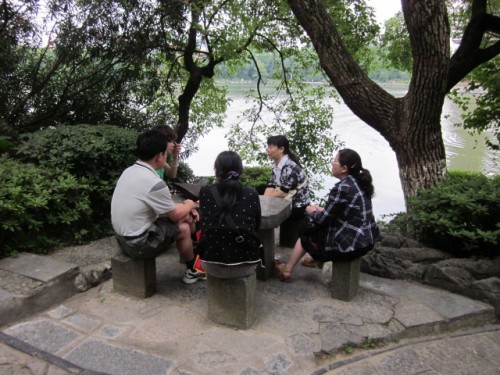 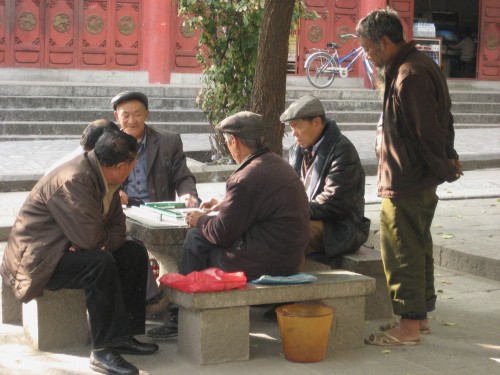 There are several locations in Saint Paul where we might develop public plazas with tables and chairs. The first that comes to mind is Landmark Plaza which currently is little used except by students who sit on the grassy mound on sunny days. With tables and chairs, this could become a lively central square. Other future opportunities to create public plazas with a variety of seating include the new Seven Corners development site opposite the Xcel Center and the Midway Shopping Center development site at Snelling and University Avenues. 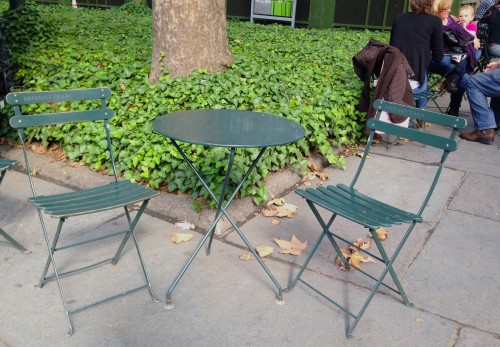 6 thoughts on “Benches, Tables and Chairs for a More Walkable and Welcoming Saint Paul”