Le Sueur, Minnesota is not a county seat. But it is town that looms large in my mind as the home of the Minnesota Valley Canning Company, originally based in  Le Sueur, which became Green Giant – now a subsidiary, like all Minnesota food innovators (Pillsbury, Totino’s, Jeno’s, etc. of General Mills). Unfortunately it appears the Green Giant has, like Elvis, left the building.

The town, home to some 4000 people,  is interesting in many ways. William Worrall Mayo began his practice here, before moving to Rochester. The town itself lays claim to being in both Le Sueur and Sibley counties. Not even Minneapolis is in more than one county. The town sits just off of Highway 169, which bypasses the city. Being too lazy to look it up, I will assert the road used to run down Main Street (now Highway 112, which is Main Street), until some time [1960] as a bypass was constructed to speed traffic [okay, I am not really that lazy, it is true]. [Map]. This starkly contrasts with St. Peter, in our next installment. 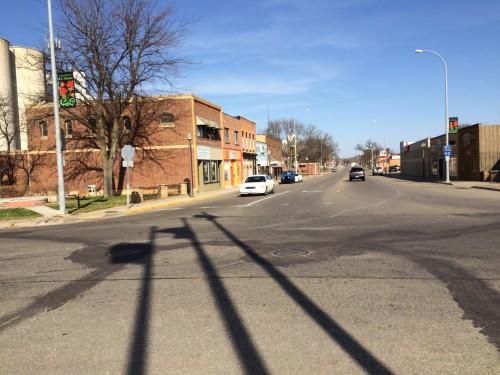 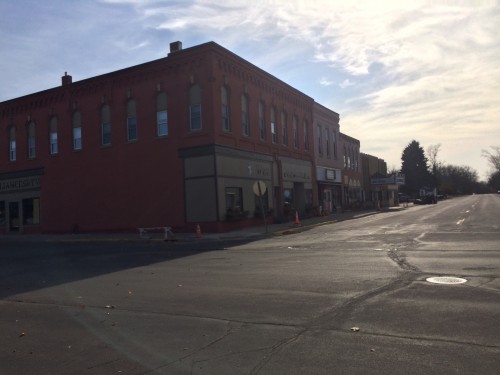 Main Street in Le Sueur south of the pedestrian mall. With cinema and bar.

It still has food production in its core, as The Friendly Confines Cheese Shoppe sells a large variety of dairy and non-dairy products.

More interestingly, a pedestrian mall (adjacent to the Valleygreen Square shopping center) was installed on Main Street just south of the intersection of Main and Bridge. (Bridge Street, as you might guess, has a bridge across the Minnesota River). This I suppose has the aim of diverting traffic back on Highway 169. There is a small outdoor seating area for one of the restaurants/taverns, but it didn’t seem to busy on a Fall Sunday afternoon. We ate at Home Plate, which was better then expected, with excellent prices. 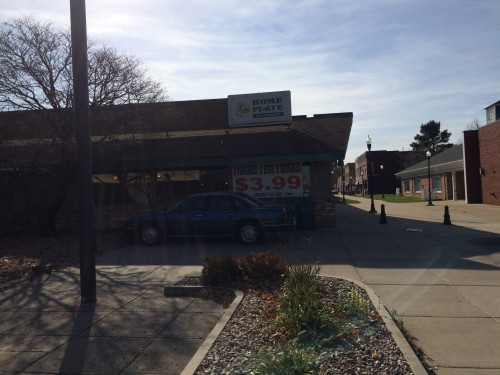 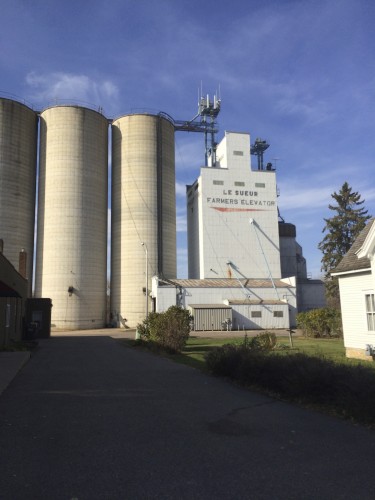 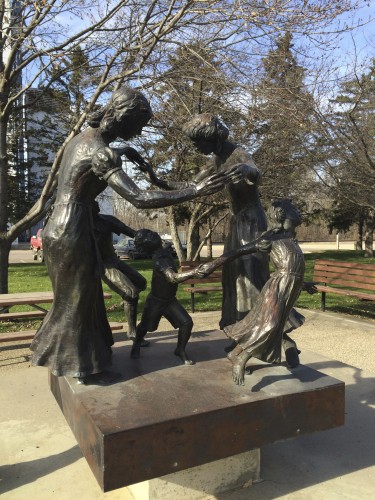 “The Mothers” – sculpture adjacent to the Mayo Home. “The sculpture brings two historic residents of the Mayo Home, Louise Mayo (1858-1864) and Louise Cosgrove (1914-1920) together. The Mothers Louise form an arch through which William J. Mayo, his sister Gertrude, and Robert Cosgrove pass. Louise Mayo was the wife of WIlliam W. Mayo and the mother of William J. and Charles Mayo. These three men founded the Mayo Clinic in Rochester. Louise Cosgrove was the wife of Edward Cosgrove and mother of Robert Cosgrove. Both men were President and Chairman of the Board of the Green Giant Company of Le Sueur. Dr. Paul T. Granlund, St. Peter, Minnesota created and cast this sculpture in 1978. The sculpture was dedicated the Arthur and David Cosgrove Memorial Fund.” 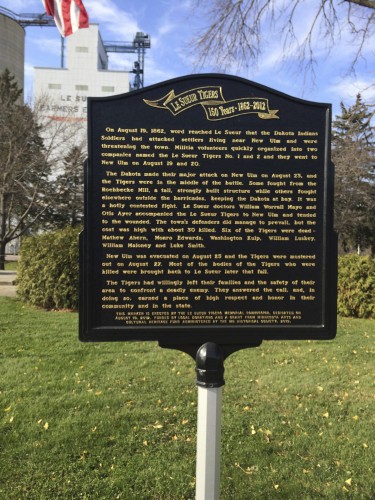