It’s no secret that Minneapolis is experiencing both an apartment boom and condo dearth at the same time, which begs the question, “why aren’t condos being built at the same rate as apartments?” According to many,  Minnesota’s construction defect laws are to blame. The rhetoric usually claims Minnesota has unique construction defect laws for condos; it’s said that these laws make the developer liable for defects in condos for an extended period of time, and this long-tail liability increases the developer’s insurance costs beyond profitable levels for the project. But for a number of reasons, that argument misses the real story. The better explanation lies in basic principles of supply and demand.

Granted, it is also possible that owners are simply filing more construction defect lawsuits for condo projects under preexisting construction defect laws, thereby increasing insurance premiums. However, without any substantiating research, that is a hollow argument seemingly based on anecdote rather than hard data. Yet even accepting that developers are increasingly sued for construction defects in condos, that cannot be the whole story in light of the arguments outlined above. This is especially true considering that the current condo shortage is consistent with overall market trends.

Generally speaking, condos leading up to the Great Recession were built at historically high levels relative to apartments. Indeed, in 2006 nearly as many condos were built as apartments (see the graph below). But once the Great Recession hit, the housing market lurched to a stop as credit standards tightened; consequently, the country was left with a condominium surplus. It took several years for condo demand to pick up the slack, and only within the past couple of years has a condo shortage become apparent in the Twin Cities. However, the current shortage is predictable considering housing supply reacts to perceived demand, and since condominium projects are complex in nature, one should expect considerable lag time before supply catches up with demand. Nonetheless, the Twin Cities is beginning to see new condominium projects proposed or under construction. If this trend continues, the condominium shortage should disappear and most of this talk about unfair construction defect laws should go with it. 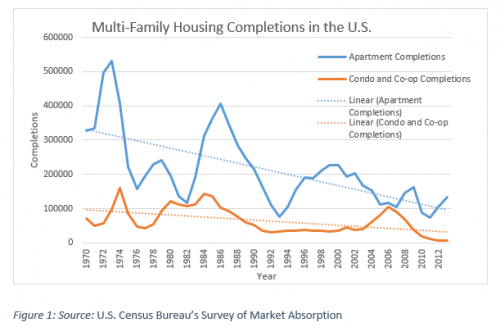