On September 30, Minneapolis Councilmember Alondra Cano hosted an energetic public forum on the topic of gentrification. “Gentrification is lurking,” said one speaker. Almost everyone agreed about who to blame: rich private housing developers, eager to make an easy buck on luxury condos. And the panelists mostly agreed about the solution, too: more affordable housing in Phillips and other central city neighborhoods.

But building affordable housing in the central cities isn’t cheap. And a big part of the reason why is that private developers drive up costs, the mirror image of the for-profit luxury builders that anti-gentrification activists so deplore.

Last year, I helped put together a study about the cost of constructing affordable housing in the Twin Cities. The results proved somewhat controversial, in part because they challenged the prevailing wisdom about where affordable housing money is best invested.

It turns out that subsidized housing in the central cities of Minneapolis and Saint Paul costs a premium compared to housing with identical characteristics situated elsewhere in the region. The average unit of affordable housing cost $227,660 in Minneapolis and $224,157 in Saint Paul. Elsewhere in the region, the average unit cost is $194,174. The basic trend is easily seen in the map below, which uses data from the study. Costs are visibly higher in the central cities. 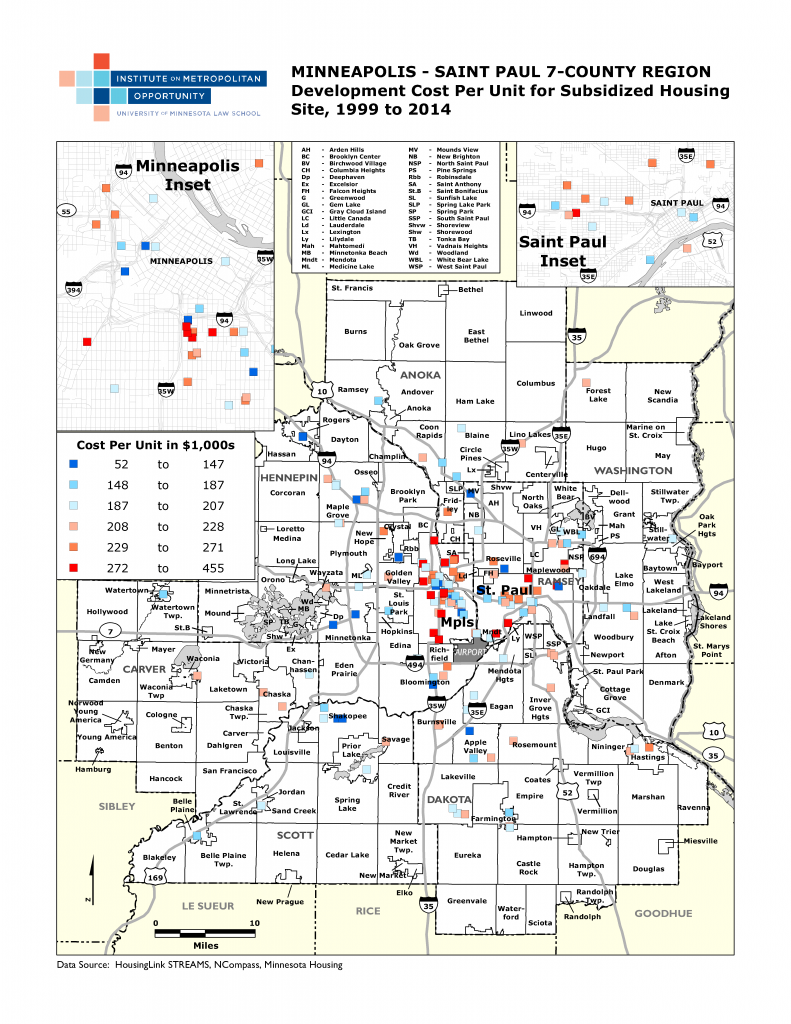 But straightforward averages don’t control for things like unit size, land acquisition, or intended income level. Once you do, it becomes apparent that the cost gap is even wider than it first looks, because construction in the suburbs is much more likely to be multi-bedroom units intended for moderate incomes, which is comparatively more expensive to build. Units produced in the cities, by contrast, are usually one-bedroom or studio apartments intended for individuals and families with very low incomes. After controlling for these factors, the cost gaps grow: compared to identical housing in the suburbs, projects in located in Minneapolis cost an extra $30,000 per unit, while projects in Saint Paul cost an extra $38,000 per unit.

In other words, the trend–higher costs in the central cities–shows up pretty much any way you slice the numbers, ranging from straight averages to inflation-adjusted regression models like ours.

This pattern creates a puzzle. Minneapolis and Saint Paul contain slightly less than one-quarter of the seven-county metropolitan area’s population. Despite this, in the previous decade, about 57 percent of the region’s new subsidized affordable housing has been produced in the two central cities. So why would a largely-private subsidized housing industry build disproportionately many housing units in the areas where construction costs the most? This seems to run counter to the simple logic of the market, in which production declines as cost increases.

The answer, it seems, is that the affordable housing market doesn’t look–or work–anything like a traditional private market. What’s more, affordable construction takes very different forms inside and outside of the central cities.

In Minneapolis and Saint Paul, a large industry has grown up around affordable housing construction, with yearly expenditures ranging into the hundreds of millions of dollars. Individual projects tend to function as collaborations between many different private and public entities within this industry. For instance, a single project might include participation from a community development corporation (or CDC), a second, smaller, minority-run “partner” CDC, a nonprofit financial intermediary organization, various lawyers and financial professionals, a land bank, a syndicator for monetizing low-income housing tax credits, private for-profit investors acting as limited partners as part of the syndication process, the general contractor, an architectural firm, the state housing finance agency, local community development agencies…the list goes on and on. 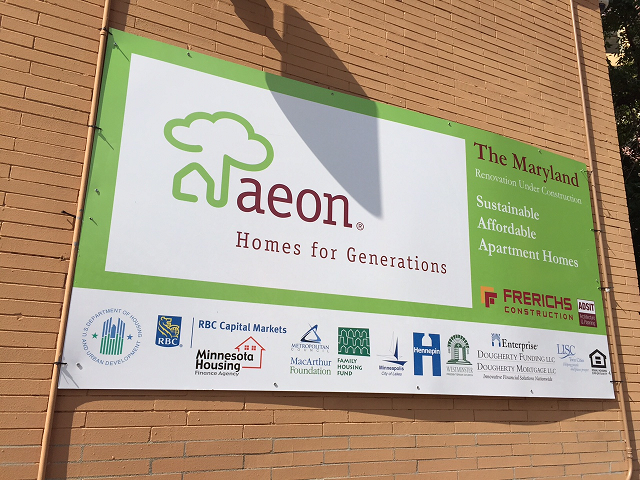 This project brought to you by…many, many different people.

Very few of the entities actually building housing have much incentive to cut costs. After all, nobody’s paying for affordable development out of pocket; everyone involved is relying heavily on government grants and lending. This funding is distributed after development costs are calculated, and matched to that cost–in other words, a developer determines how much it needs to build a particular project, and then the various funders help produce that amount. Subsidies are paid out with the understanding that some fraction will be spent on employee salaries and other organizational overhead. If a project costs less overall, there’s also less cash available to pay salaries at the various participating organizations.

Put more succinctly, in the world of subsidized housing, the best way to bring more money into an organization is to build bigger, more expensive, and more numerous projects. Now take those incentives and spread them across an entire network of organizations, all of which are funded, directly or indirectly, by the same government subsidies, and which taken together dominate almost all affordable development in the central cities. Little wonder, then, that the projects being proposed for these areas cost an arm and a leg.

(There are limits, of course. Truly exorbitant projects might run into trouble with funders. But the upper bound is higher than you might expect: lately, there have been a spate of local affordable projects with per-unit costs exceeding $500,000 or even $650,000 per unit.)

By comparison, much of the subsidized housing outside Minneapolis and Saint Paul is built directly by public agencies, such as county development agencies. Rather than outsourcing every stage of project development to one of a half-dozen organizations, who are each aiming for a slice of the pie, suburban subsidized housing frequently takes a much more direct path from conception to creation. As a consequence, it frequently costs far less to build, with average project costs running under $200,000 per unit.

Affordable developers are entitled to fair pay for their work, just like anyone else. But it’s important to recognize that these organizations are not purely altruistic. They are economic entities operating in a specialized industry. This industry has distinct financial incentives, similar to the private for-profit developers who are so frequently villainized in public debate.

Indeed, in certain cases, it’s the exact same developers. Some individuals operate both a for-profit market-rate development company and a nonprofit community development corporation. (Nonprofits have access to a larger pool of potential subsidies.)

And while market-rate developers have an obvious interest in promoting certain policies, the same is equally true for the affordable housing industry. Several speakers at CM Cano’s anti-gentrification, pro-affordable housing forum were closely affiliated with the Equity in Place coalition, an organization composed heavily of community developers that advocates for increased affordable development in central city neighborhoods. (One had served as the program director of no fewer than three development nonprofits.) It was also probably not a coincidence that some of the glossy material handed out at the forum was sponsored by Urban Homeworks, a mid-sized community developer based in North Minneapolis. That organization’s executive director happens to chair the Metropolitan Consortium of Community Developers, which lobbies local and state government for more affordable housing funding for nonprofit development.

Nor are nonprofit community developers especially representative of the low-income groups they purport to serve. After last week’s forum, CM Cano noted that many neighborhood associations–which are presumed to be pro-development–do not much resemble their neighborhoods:

.@chaunwebster City said they were engaging neighborhood associations, but most are comprised of 81% white home owners #mpls2020

It’s a fair point, worthy of discussion. But what’s left out is that the exact same critique could be made of the affordable housing industry. One survey showed that 78 percent of community development corporation members are white, including 85 percent of managers and executives. What’s more, the largest organizations, which are doing most of the heavy lifting in housing development, are even less diverse.

It’s understandable that community activists worry about private interests transforming their neighborhood for financial gain. But the debate over affordable housing rarely boils down to “residents v. outsiders” or “private benefit v. the public good.” Instead, it often reflects a battle between well-funded and influential interest groups, with cities and neighborhoods caught in the middle.

34 thoughts on “Affordable Housing Is An Industry, Too”