There was an article yesterday in the Minnesota Daily (a student newspaper) with the subhead: “Few students apply to neighborhood board organizations in Minneapolis.”

I was surprised to see the Marcy-Holmes Neighborhood Association (MHNA) characterized as one of the two “best at involving students in decision-making.” This can’t be true because, unlike the vast majority of Minneapolis neighborhood organizations, MHNA has written policies into their bylaws that appear designed to exclude students from the process.

Despite their large student population, MHNA has decided to hold elections in June, a time when many students are out of town. This is on purpose. MHNA’s president admitted as much in 2011: “my view is that the Marcy-Holmes annual meeting was moved to the June time frame to minimize student participation, especially in elections.” Students and other reformers have been asking the organization to change the timing of their election for at least the last 10 years with no results.

This invaluable bit of neighborhood history from Christopher Meyer explains it very well:

In June 2004, approximately 90 people packed into a crowded room to partake in the annual election meeting of the Marcy-Holmes Neighborhood Association, the organization designated by the city of Minneapolis to represent the Marcy-Holmes neighborhood. Neighborhood meetings are typically low-key, casual affairs, but this one was monitored as thoroughly as a U.N.-supervised election in a Third World republic. Representatives from the League of Women Voters scrutinized the credentials of all attendees. To be eligible to vote, they would need to be certified members of MHNA (which required the submission of a valid membership registration at least 30 days prior to the meeting) and they would need to present a photo ID as well as proof of residency in the neighborhood. The MHNA board also hired a parliamentarian from the city’s Neighborhood Revitalization Program to ensure that all proceedings were conducted legally. They even hired an armed beat patrolman to maintain security in case matters got out of hand.

What issue could possibly have been so contentious that the board apparently felt the need to prepare against the possibility of violence? In short, reformers were trying to amend MHNA’s bylaws in order to make the organization more accessible to student residents. The previous fall, a group of students had worked with an MHNA representative to prepare a list of amendments designed to enable greater student participation. The biggest change the reformers wanted was to change the month of the annual meeting — when elections for board officers and directors are held — from June to October. The reason was obvious: Students are less likely to be around during the summer. Despite this fact — or as I suspect, because of it — the association voted to reject the schedule change as well as every other student proposal.

“Length of residency” requirements are another tactic for discouraging student (transient!) participation. Only three Minneapolis neighborhood associations have residency requirements of six months or greater to become eligible to serve in elected leadership; of those three, two have massive student populations: Marcy-Holmes and Prospect Park (the third organization is the Whittier Alliance, which is 80% renter). How do most Minneapolis neighborhoods handle the residency issue? The Linden Hills Neighborhood Council is a good example: all residents are members, and all members can be elected to the board of directors. 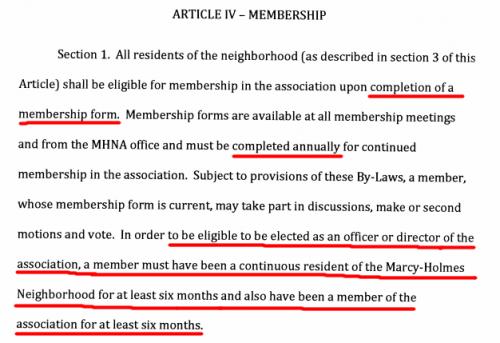 Residency requirements of the Marcy-Holmes Neighborhood Association are unusually strict.

I serve on a neighborhood board with a college student who never attended a neighborhood meeting until the one where he was elected. He is supremely qualified and dedicated. He managed to convince a room filled with longtime residents to vote for him. Now he’s getting stuff done like no other board member in the history of board members. If someone impressive and capable wants to be involved, why screen those candidates out of the process? What’s the harm in letting the voters sort it out?

19 thoughts on “Students Purposely Excluded from Some Neighborhood Boards”