It’s been over a month since the grand opening of the Northside Greenway Demonstration segment, on the 3000 – 3500 blocks of Irving Avenue North. As someone who has been volunteering on this proposal since 2008, the event was an exciting milestone. It was also incredibly daunting, because it was the most contentious public event I’ve ever participated in. 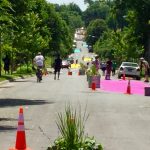 The concept of the Northside Greenway was developed by residents who saw the positive impacts of linear parks in North Minneapolis and elsewhere. In North Minneapolis, Victory Memorial Parkway is a destination in itself, and also provides access to other trails and large parks. Milwaukee Avenue, a few blocks of street that were converted into a park in the 1970’s, has become one of the most beloved corners of the Seward neighborhood. The Midtown Greenway has attracted hundreds of new apartments and condos on adjacent former industrial sites. Residents saw the potential to borrow design elements from these successful parks, to create a new green connection between several existing parks in the heart of North Minneapolis. The Park Board has acknowledged a need for improved access to parks in North Minneapolis.

I attended the grand opening on June 25, 2016 with my son, and when we arrived a little before the official start time, there was already a shade tent set up on the 3500 block with ‘Stop the Greenway’ signs prominently displayed. There was a person with an anti-greenway sign over his shoulder on a stick, who walked back and forth on the proposed Greenway route. Another participant had decorated his bike with anti-greenway stickers. There were ‘Say NO to the Greenway signs’ in front yards along the route. A resident who walked along the block compared the experience to ‘running the gauntlet.’

The afternoon also included face-painting, a double-dutch station, music, pavement painting, people walking dogs along the demonstration segment, and kids playing. There were neighbors watching it all from their lawns, some of which displayed white ‘Say no to the Greenway’ signs, while others displayed yellow ‘We support the Greenway’ signs.

I also want to acknowledge the many people who voiced opposition to the Greenway proposal, and were willing to have conversations with me during the event. I was wearing one of the blue shirts that identified me as an event volunteer (and thus a likely supporter of the Greenway proposal). I appreciate the courage it took for the people I spoke with to bridge a divide and share their thoughts.

From these conversations, I learned that there is more nuance to the perspectives of residents than can be captured by lawn signs. Neighbors with white signs aren’t necessarily saying ‘absolutely not’ to a street with less traffic, less speeding, or less noise. The most common themes from several conversations with folks voicing concerns were: include everyone in the planning going forward, and make sure the project addresses practical needs and concerns. Some people said things like “I’m not opposed to the overall idea, I just think it needs to be planned out differently.”

At first glance, the ‘Stop the Greenway’ signs and the ‘We support the Greenway’ signs seem to be saying opposite things, and on the surface they are. But deeper, all of the signs are saying: ‘I am paying attention to this proposal, and I don’t want to be left out of the planning process.’

At its core, the demonstration installation isn’t about a project, it’s about a choice. There are roughly 20 residential streets that run north-south in North Minneapolis, and they all look about the same. These streets have two-way traffic and parking on both sides. For homebuyers or renters seeking a new place to live, it’s like you’ve got 20 options, and they’re all vanilla. You might say ‘Hey, I like vanilla ice cream, it’s the most popular flavor – what’s your problem with vanilla?’ Or more to the point, you might say ‘Typical streets with parking on both sides of the street are convenient, they’re normal, and people know what to expect.’ That’s a fair and reasonable perspective. But what about renters and homebuyers who would rather live on a block with less traffic and more green space? Is there going to be a place for them in North Minneapolis?

The Northside Greenway proposal isn’t that every street in North Minneapolis should be turned into a park. No one is proposing that all 20 of the buckets of vanilla ice cream behind the display glass be changed to mint chocolate chip. The proposal that’s up for discussion would leave 19 buckets of vanilla ice cream, and replace one of the buckets with mint chocolate chip – giving people a choice that wasn’t there before.

In an analogy about ice cream flavors, it’s obvious that common sense would support adding a little variety to the menu. But life is more complicated than this simple analogy. Especially because picking a place to live is more complicated and challenging than buying an ice cream cone. And once someone has made the choice, switching locations is not as easy as picking out a different flavor of ice cream. Nevertheless, the key question remains: a decade from now, will people looking for less traffic and more green space be able to find what they’re looking for in North Minneapolis? A decade from now, will the line of parks in the heart of North Minneapolis be connected by an inviting amenity that works well for residents, people walking, and people on bikes? These are questions that can only be answered by ongoing community discussion, and it’s a discussion that began many years ago.

The public conversation about a potential Greenway started with residents making presentations at neighborhood group meetings. After the presentations, we would hear comments like “It’s a nice idea, but Minneapolis Public Works will never go for it.” Then when we talked to Minneapolis Public Works staff we’d hear: “It’s an interesting idea, but residents will never go for it.” It took three years of work by local residents and grant-funded community outreach to demonstrate enough resident support to get the city involved in the community engagement. This is not a criticism of the city. I mention this only to make it clear that residents got engaged first; the city got involved later.

The City’s first step, once it got involved, was a series of forums and surveys to get a better understanding of the level of local support. The forums were especially informative because people could interact with neighbors, ask questions about the proposal, and hear what everyone in the room was thinking before completing a survey. The dynamic at these meetings was respectful: neighbors who liked the Greenway proposal explained their interest in safer streets for their children and themselves, and noted that traffic-calming and additional green space would be welcome changes. Residents also expressed concerns about access, lighting, and safety in alleys, and potential solutions were discussed. Even though the results of this stage of surveys showed majority support for the Greenway, the city did not start building. Instead, the city recognized a need for additional community engagement – to hear from more people, and to explore potential solutions to the concerns that were raised.

As challenging as the grand opening event was, it was mostly encouraging, because it is clear that people’s preferences and values are much deeper than a binary ‘yes/no’ about a specific project. The love for North Minneapolis that has driven residents to devote many hours to the Greenway proposal is not better or worse than the love for the North Minneapolis that has driven people to raise their voice in concern or opposition about the same proposal. It’s ultimately the same love, a love that says “I care about this place, and I care about what happens here.” That common ground isn’t always obvious, but it is definitely there. Finding that common ground will help residents determine together whether a Greenway should be built, and if so, what it should look like. 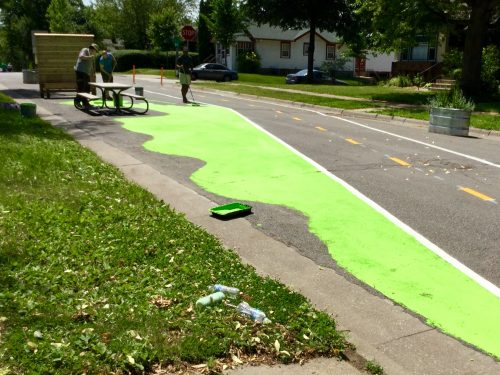