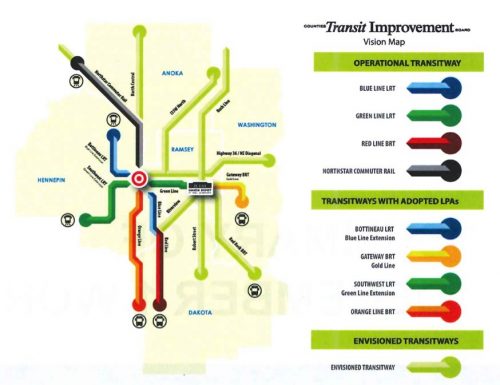 The Counties Transit Improvement Board (CTIB) met on December 21 to discuss the probable voluntary dissolution of CTIB and future funding options for metro rail and bus transit systems.

The 78 page PDF was distributed and was the working document used at the meeting. Pages 3-7 offer a summary of the dissolution proposal as well as a timeline for CTIB dissolution. Please note that two scenarios were presented. One scenario has a complete dissolution of CTIB and the other scenario has four of the five counties withdrawing from CTIB with Washington County remaining behind.

The goal is to remove the legislature and CTIB from the transit capital funding process and replace it with individual county transit taxes or certain counties in conjunction with other counties transit tax funding. Operational costs would also come from county transit taxes along with a legislative appropriation to the Met Council.

Here’s the highlight of the proposal: 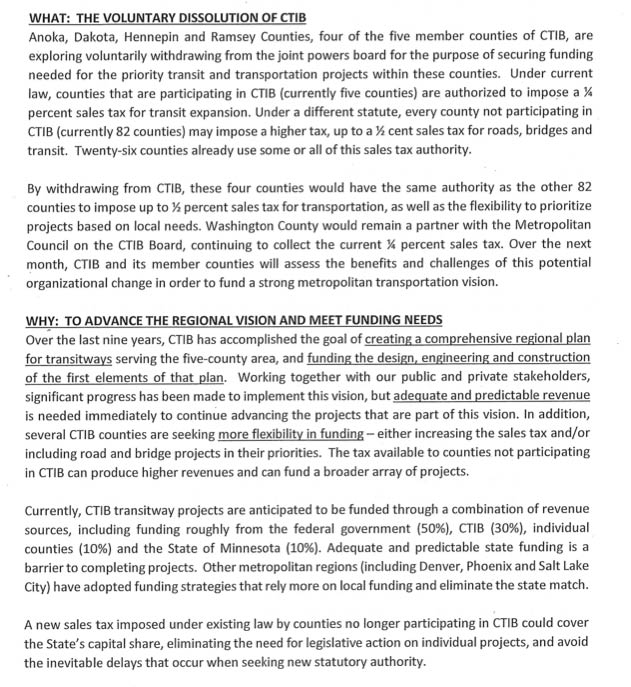 It will be interesting to see if county specific transit funding will come to pass. On the one hand you have legislative bodies that appear to be hopelessly deadlocked on transit capital funding and roads and bridges funding issues, which was borne out during the last Minnesota legislative session when the transportation bill in effect blew up the end of the legislative session and prevented a special session during the summer and fall months. On the other hand there are many who believe that removing the state from transit capital funding sets a bad precedent that could spill into other policy areas where there are profound areas of disagreement.

6 thoughts on “Counties Transit Board Dissolution Plan in the Works”