Earlier this month, The New York Times ran an op-end titled “The Walls We Won’t Tear Down” about how some of society’s worst problems have a very boring cause: exclusionary zoning laws. Here’s the conclusion:

Just as it is shameful for government regulation to exclude people from neighborhoods on the basis of race, it is similarly deplorable for local governments to exclude entire groups of adults and children from communities on the basis of income. We can either make this problem better and integrate more fully or we can let it worsen and allow our society to disintegrate further.

American land-use regulation has a huge effect on who can live where, and how much they pay. In many cities, including Minneapolis and Saint Paul, boring laws about minimum lot sizes, parking requirements, maximum floor-area ratios, shoreland overlay districts, and locally-designated historic resources reinforce dramatic social problems like the urban housing shortage and economic and racial segregation. Basically, the problem is that we have laws prohibiting the construction of less-expensive housing in certain areas, and this leads to exclusive government-enforced country club districts.

I’ve heard folks say, sometimes in jest, that we should just ban zoning. But zoning itself isn’t a problem. Tokyo is good and has zoning, but the zones are designated and managed by a national agency. Vienna is good and has zoning, but none of the zones prohibit multi-family homes. Houston… isn’t super great and doesn’t have zoning, but it does have Texas-sized parking requirements. And if you’re renting in north Minneapolis and you don’t want the Kemp’s factory to keep expanding forever along West Broadway, zoning is pretty much your last best hope.

At YIMBY Town 2017, Dan Keshet from Austin presented a more targeted solution than “ban zoning.” He proposes a state-level reform that focuses on neighborhoods with exclusionary zoning, and leaves zoning laws in place everywhere else. We can measure exclusionary neighborhoods by taking the value of an area of land (in dollars) and dividing it by the number of homes on the land. An exclusionary neighborhood is one with a high ratio (Keshet suggests $150,000 of land per home); this indicates that zoning is either mandating large lot sizes, or prohibiting multi-family homes on valuable land. The reform would permit additional development until the ratio had fallen back below the threshold, at which point ordinary zoning laws would be reinstated.

I made a map of land value per home for single-family homes and multi-family rental homes (condominiums were too tricky). The map shows very high land values per home around the chain of lakes, which indicates that restrictive zoning might be excluding folks from high-opportunity areas. 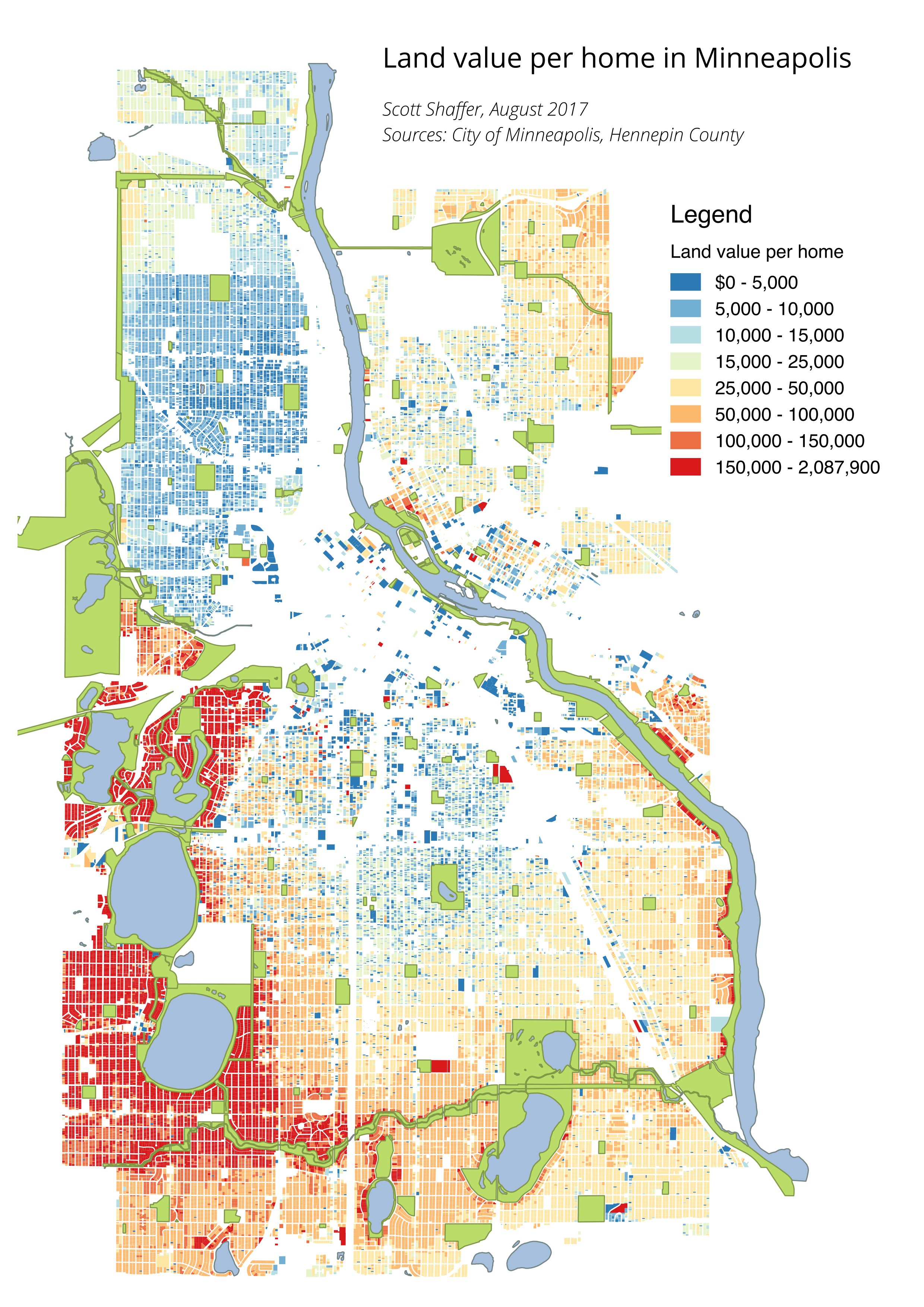 This reform has a few things going for it:

Still, there are details missing from this proposal, and obstacles I see in its way:

I don’t know if this is a feasible solution, but I know we have a problem. The housing shortage in Minneapolis is dire. For 17 consecutive quarters, the rental vacancy rate has been below 3 percent (around 5 percent is considered healthy). The latest estimates from Marcus and Millichap put the vacancy rate in the uptown area at 2.2 percent. This is exacerbated by the fact that we basically have a city-enforced country club district in Lowry Hill, which is within walking distance of both downtown Minneapolis and the chain of lakes. There are a lot of “All Are Welcome Here” signs in the neighborhood. Maybe we should start zoning like we mean it.

63 thoughts on “A Plan for Tearing Down Exclusionary Zoning Walls”