Via Scott Shaffer on Twitter, here’s a chart for you. It shows the Twin Cities leading the country in rental market tightness, and comes from something called the RealPage and Axiometrics report on Business Wire, a BerkshireHathaway Company. 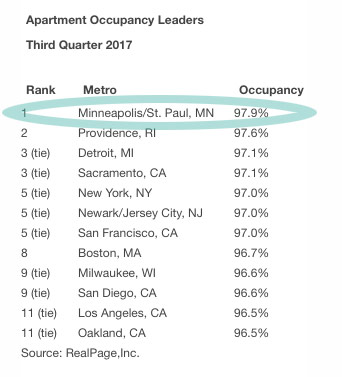 And one more for good measure. 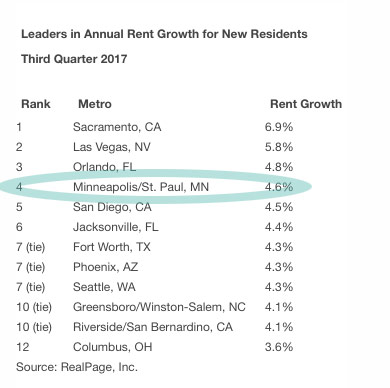 The report explains itself thusly:

Among the country’s bigger markets, Minneapolis/St. Paul holds atop the occupancy leaderboard, with barely 2 percent of the existing stock now available.

A handful of metros that had been mainstays on the list of rent growth leaders now are posting milder price increases. Atlanta, Dallas and Charlotte, for example, are absent from the top achievers. A slew of new product moving through initial lease-up has flattened rent growth in the urban cores of these cities. In turn, overall rent growth has slowed to 3.5 percent in Atlanta, 2.8 percent in Dallas and 2.5 percent in Charlotte. Rent growth already was modest due to new supply in spots such as Denver, Portland, San Francisco, New York and Nashville.

The Twin Cities has gotten a bunch of number one rankings lately, including “best parks” and “largest racial inequality gap.” You can add this to the list.