If you asked one of the thousands of new Minneapolis residents who moved in since 2010 “What are the borders of North Loop?”, you may find they consider the western border to be the 4th Street freeway viaduct. Despite the neighborhood continuing on west up to I-94, the viaduct walls off a landscape of low density industrial and parking lots from the fast growing neighborhood. It gets even worse from the other side of difficult-to-cross 7th Street, and the I-94 trench creates a final barrier, separating lower North Loop from an even more neglected corner of the city. 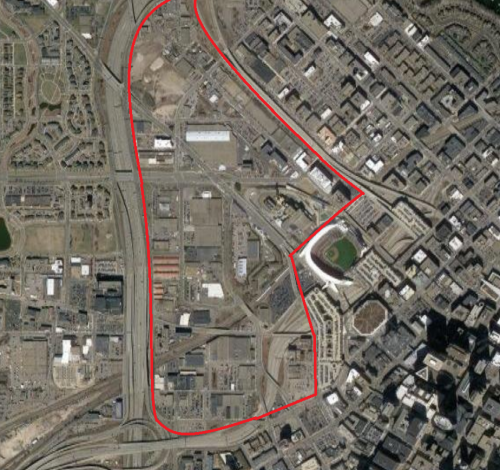 “Lower North Loop” as the Small Area Plan calls it

City boosters and developers, in particular a group known as The 2020 Partners, have imagined this area declaring independence as the West Loop, a dense, modern neighborhood. According to their vision laid out in 2010, the construction of the Southwest Light Rail, MN United soccer stadium, and tearing down the 4th Street viaduct wall would break open the floodgates of development. Over time, broken street grids over I-394 would be reconnected, orphaned land next to freeway ramps would become luxury lofts, and an urban, linear park would bring some much needed green to this reclaimed industrial land. 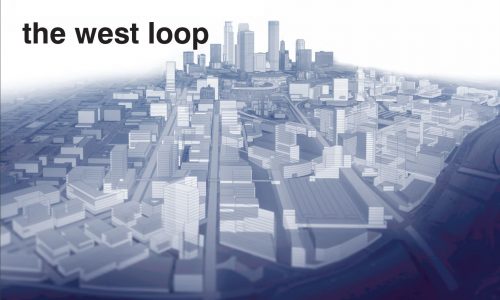 The envisioned West Loop – in all its cubic glory

The idea is nice at least. There’s an incredible amount of underutilized city just within reach of downtown, and it comes at a time when we’ve all but declared war on the surface parking lot and residential vacancy rates are at 2%. But the reality is the catalysts envisioned by 2020 Partners haven’t come to pass. Southwest Light Rail won’t board passengers until 2021 at this point – and relies on the federal match not being locked behind moving goalposts (like a historical district that protects rail yards). MN United took their stadium to Saint Paul. And we still haven’t taken down the freeway viaducts, with the last available North Loop area plan implying some parties involved don’t consider the effort worthwhile (Page 74). On top of that, The 2020 Partners’ plan isn’t officially adopted by the City of Minneapolis. The 2020 vision actually runs counter to the North Loop small area plan in a number of ways, and is just a group of (admittedly, powerful) interests that want to see this corner of the city thrive.

While it’s pretty clear the full neighborhood build out wasn’t intended to be finished by 2020, the implication was that the major developmental catalysts would be in place by then. As 2020 is right around the corner, can West Loop still reach its imagined potential, even without the development boost from megaprojects? It’s certainly possible. If they were to fully commit to making this vision a reality, Minneapolis could even take the parts of the West Loop plan that were intended to be supplemental to the original megaprojects and turn them into the focal points instead.

As a part of the soccer stadium plan, the Minneapolis Farmer’s Market was going to expand into a larger, year round facility. In contrast to US Bank Stadium’s “Yard” or the green space that has been planned to lead to Allianz Field in Saint Paul, the West Loop soccer stadium would have taken cues from Lowertown’s CHS Field and its proximity to the Saint Paul Farmer’s Market. The old farmer’s market would have been offered up for redevelopment, allowing the stadium to be surrounded with new construction as insulation from nearby I-94. 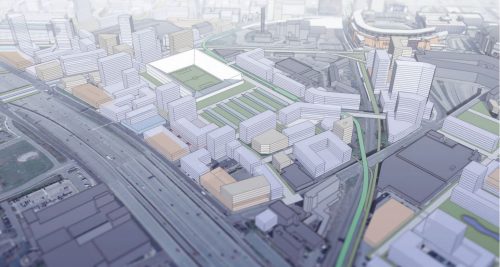 In the 2020 plan, the Farmers Market served as an entrance to the proposed MLS stadium

Even without the stadium plan, the Royalston Avenue Southwest Light Rail station is still planned to be subnamed “Farmers Market Station.” So without the stadium as a development hub, what if we went ahead with the Farmer’s Market move anyway?  Seattle’s Pike Place Market would be an excellent model to follow – combine a farmer’s market with a food hall. Do something we should have done with Target Field Station and put a roof over it! We’ve even got a leg up over the original Pike Place Market with an outdoor venue right around the corner at Target Field Station.

If something like that existed in Minneapolis, you’d want to live within walking distance from it, right? Well then Minneapolis should take a page out of Saint Paul’s book and develop the vacated former Farmer’s Market site into the first new residential development in West Loop. As it stands now, private development is only beginning to creep west of the 4th Street viaduct, and it may take years for someone to take the bait.

When Saint Paul invested in a failing apartment development that eventually became Penfield Apartments, it was an investment in the future vibrancy of Downtown Saint Paul. Years later, that investment paid off both in the form of a downtown grocery store and in an $8.7 million profit for the city. In order to jump start the neighborhood, it may be necessary for the city to directly invest.

As mentioned above, if all goes according to plan, this neighborhood will be home to Royalston Avenue/Farmers Market Station. But let’s pretend for a moment that we’re living in a nightmare world where all the work we spent designing a line to kooky Bush-era ridership metrics might be for nothing.

Southwest Light Rail plans call for a signaled intersection to be installed at 7th St and 5th Avenue to make it easy for future train riders from the southwest to cross to the stadium promenade. For the same reason, we should plan on building this intersection regardless whether a train is involved or not. Pedestrian improvements to better connect the area to Target Field and Target Field Station would help to lessen the island effect from Olson Memorial Highway and 7th Street, effectively connecting this area to light rail even without the Southwest Extension.

Restriping Royalston Avenue to add bike lanes would be beneficial as well. Currently bike lanes on 12th St end at Glenwood, with an implication that riders will either turn onto Glenwood or enter the Cedar Lake Trail. Since the bike lanes pick up again once Royalston becomes Oak Lake Avenue north of Olson Memorial Highway, adding this link is a necessity.

Turning focus away from the Farmers Market, a seeming footnote of the 2020 vision is an extension of the pedestrian area around Target Field north, past the Ford Center and the viaducts to connect with the 3rd Street stub next to Darby’s.

Proposal to extend the pedestrian promenade deeper into North Loop

Thanks to the freeways and the railroad, this area is a mess of incomplete streets and illogical connections. Someone unfamiliar with the area might not realize that 5th Street, by way of the train station, connects seamlessly to the stadium. And having giant freeway viaducts in your line of sight doesn’t help things.

An addition to the pedestrian walkway makes it easier to bridge the gaps in our street grid, having the promenade span between both sides of the freeway divide could help patch the neighborhood together, even if they’re here to stay.

Of all the items listed, this may be the lowest of the low hanging fruit. Because of it’s history as a home for warehouses and not people (and because closed off the riverfront in the area with a suburban style townhouse development), North Loop is lacking in green space. Since we’re just about out of room for it in the booming part of the neighborhood, it makes sense to buy up land in the underdeveloped part now and store it away for when development arrives. 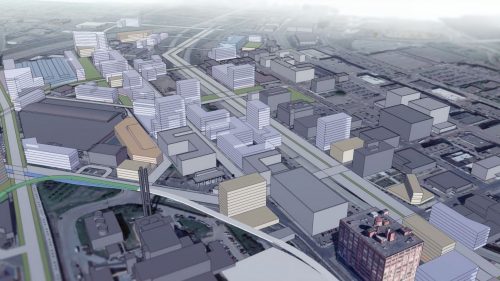 A linear park through North and West Loops

Or, you could build the park before the development and see if it helps lure developers to the other side of the viaduct. Under the original vision, the park eventually crossed over the 4th Street Boulevard that was proposed to replace the viaduct, but it could just as easily pass under – Midtown Greenway and Cedar Lake Trail both pass under many bridges and it doesn’t hurt their appeal as linear parks.

Building parks in the North/West Loop would undoubtedly require some environmental mitigation, but that could be said about any development on this side of town. I’d rather pay to clean up the land and preserve some space for relaxation in the neighborhood before there’s nothing left.

Even without a guarantee of light rail extensions, this neighborhood is heavily transit connected: the 5, 19, 22, and 755 bus routes all make stops in this neighborhood. And because the 5 and 19 pass through the West Loop, that means both the C and D Line Rapid Buses will serve the area. While the jury is still out on the A-Line’s ability to spur development like the Green Line, there’s no question that transit is in the area to stay.

Minneapolis is the majority landholder in the neighborhood. If they consolidated some of their maintenance facilities to open up real estate, they could either develop TOD themselves or put out a request for proposals seeking quality transit-centric development on the land. This may not be possible until other developments have dipped their toes into the area, but considering the stadium deal was lost because of concerns over property taxes, receiving nothing on 22% of the neighborhood’s developable land seems a bit silly. The city could even go a step further and bid out a development to fill in parcels over I-394, but a freeway cap might be asking for a bit much.

Put Lipstick on the Viaducts

I won’t mince words – the viaducts suck and if they didn’t exist, I probably wouldn’t be writing this article.

But the decision to bring them down could very well fall to the same people who refused to reduce the number of lanes on Olson Memorial Boulevard surrounding Penn Station on the Blue Line Extension. If that should happen, and we aren’t allowed to smash the viaducts to bits and recycle the concrete into something less odious, we could at least try putting lights underneath. 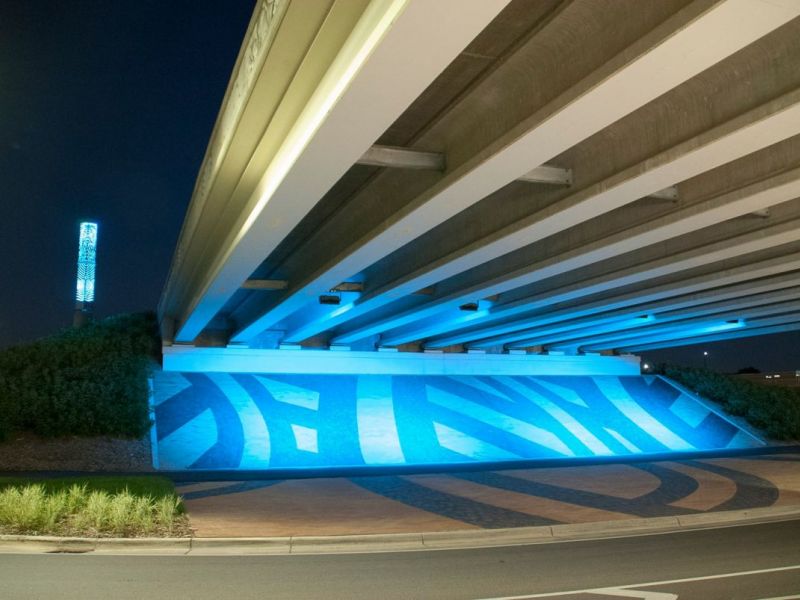 Underneath Highway 7 in St. Louis Park, they’ve got lights. And some patterned bricks. It looks a little more like the city cared about the presentation and wasn’t solely focused on how many cars could be rushed in and out of the city. I don’t know. It’s slightly better.

This one wasn’t in the 2020 vision. In fact, the HERC can be seen coexisting with all the vaguely urban buildings depicted in the presentation. But it takes a certain level of naivety to believe any sort of walkable, future-focused neighborhood could exist with a waste-to-energy incinerator as the centerpiece. 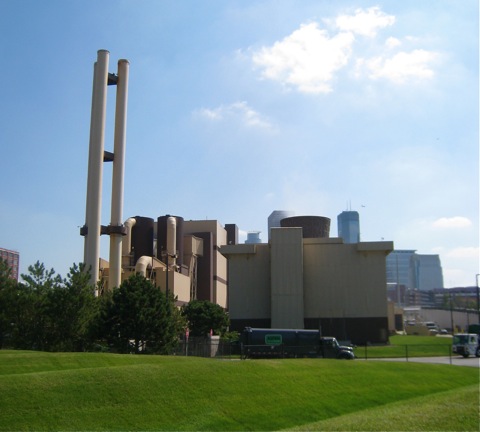 Eventually it will come to this. You can build a replica of Pike Place Market in Minneapolis, but if the view of the skyline is obstructed by a smoke stack spewing the exhaust of burnt garbage, your Kodak moments are limited.

Yes, I understand this plant plays a role in the city and county’s garbage control, and they’ve somehow convinced themselves that it’s also a useful part of their climate plan. But the reality is, even with a stadium and light rail access, you’re going to have a hard time finding neighbors for a trash burner. And that’s even just a footnote to the serious issues the HERC causes for residents of North Minneapolis.

Replacing the HERC with literally anything else would be an improvement to the neighborhood.

All these are steps the city could take to try and replicate the impact megaprojects like a stadium, light rail station, or removal of eyesore barriers might have had on the West Loop if they had been completed by now. Will the vision of The 2020 Partners become a reality for the West Loop? Or will they be filed away next to the Bassett Creek Master Plan as a good idea that required the city to give up too much of their underdeveloped land? With a new city council and growth-focused mayor, this forgotten corner of Minneapolis could finally get its day. But only time will tell.

23 thoughts on “Can the West Loop Still Happen?”