Tomorrow is Festivus! In the spirit of the celebration, we thought we’d start a round of Streets Festivus. Play along with us!

We shall start the observance with a pole. While the traditional Festivus pole is aluminum, we feel that a proper streets Festivus pole for 2017 is a bollard. A bollard, free of tinsel or festive sweaters.

The Airing of Grievances

Next, we shall begin the Airing of Grievances! This is actually why we are starting on Friday, as once we get started the list is long. 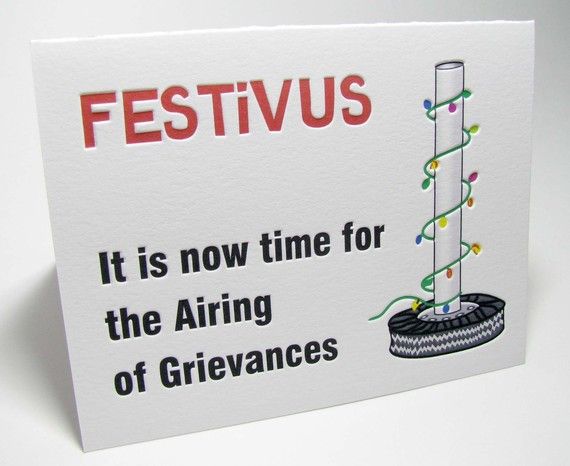 This was not a specific Festivus grievance, but it should have been:

For Feats of Strength training, we would like to encourage all the people who don’t shovel their walks to get on that. Cities, get your plows on those parking-adjacent bike lanes already, wielding mighty plow blades. This author saw someone riding against traffic the other day because it was the only safe-ish part of a street without a sidewalk to ride on, and physics tells us riding against traffic is pretty terrible.

Dear readers, please share with us your Festivus observances, including any Festivus miracles you may see today and tomorrow. Given that it’s the weekend before Major Retail Holiday #panic, we suggest not looking for said miracles at strip mall parking lots. Up to you.

7 thoughts on “A streets.mn Festivus”