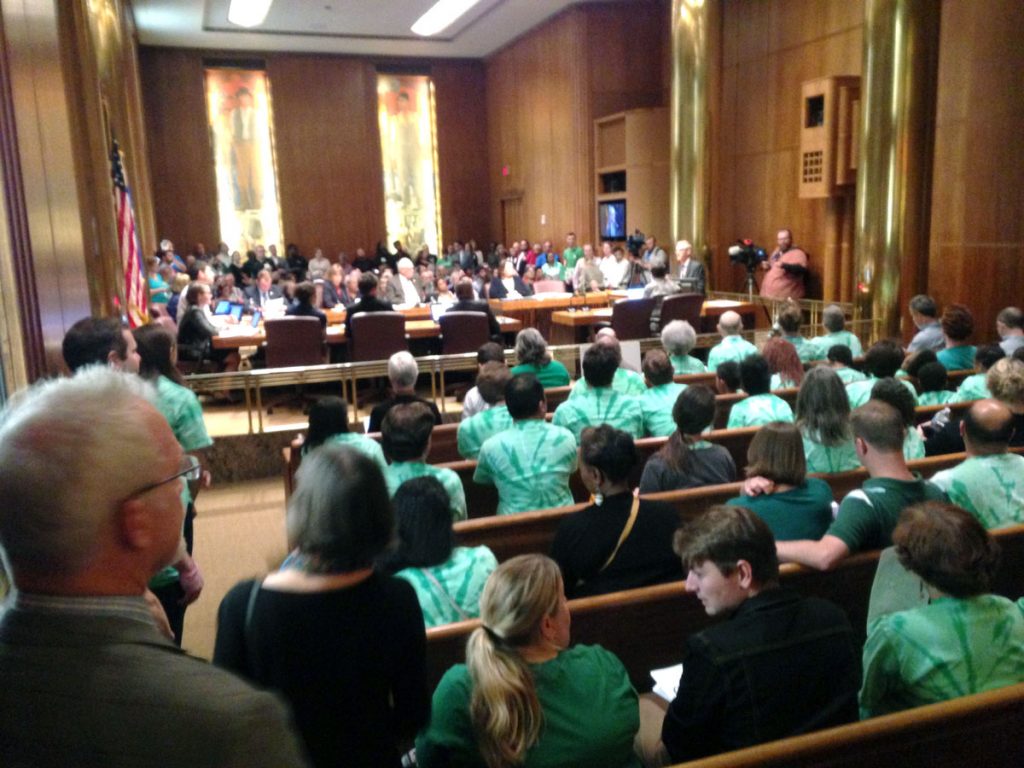 I’ve spent five years on the Saint Paul Planning Commission, a Mayor-appointed group of people intended to provide a broader perspective on city planning and zoning decisions. Planning Commissions are meant to be a less-political buffer between the public and elected officials, and Commissions have a long history that dates back to the early 20th century urban reform movement. In my time on one, it’s been an interesting experience where I’ve learned a lot about how cities work and met a lot of smart and thoughtful people.

Of course, the most exciting parts of the Commission experience are public hearings. Before a decision or plan approval, we hear from anyone who has an opinion about a particular issue. Like most of the Commissioners, I take these hearings seriously and try hard to pay attention to people’s testimony and letters. Sometimes I agree with people’s statements, and sometimes I don’t, but either way I try to listen respectfully and with an open mind.

This is true even if it’s an issue (like parking policy) about which I’ve already thought a lot about. Just because I don’t agree with a particular perspective doesn’t mean that I haven’t thought about it or aren’t listening. And I find that, in general, even people who disagree about a development or policy proposal have have a lot of shared values.

That said, today I want to share a rule that I’ve developed over the years. For lack of a better name, I call it the Category Test.

Here’s the key question, followed by a couple examples:

Q: How does the public comment look if you change the group of people involved?

Poring over reams of testimony, I usually come across statements that rub me the wrong way. One way I think about them is to use this test.

Here are two recent examples from a site review case that came before the Commission a few months ago. The testimony was about a site plan review for a new apartment building on Marshall Avenue that was going to replace two existing older single-family homes.

Here’s the first one. It’s an excerpt from a letter from the local neighborhood group that voted not to support the development application. This is the second bullet point, which covers why the group suggested balconies not be included as part of the building.

Read it first as written:

Ok, now read it again with the category removed:

[Also, if you like you can read the entire neighborhood group letter here. Union Park Board Resolution on Marshall & Moore.]

How does that statement feel if you replace one group of people with another? What happens if you put in a racial or religious category there, instead of “college students”?

Here’s another example, from the same public hearing. In this case, it’s an excerpt from a study submitted as part of the public comment called the Partnership Feasibility Study, put together in 2011 by a consultant for the University of St. Thomas and the West Summit Neighborhood Advisory Committee (WSNAC).

Here’s the highlighted section (the highlighting is not mine, but was submitted to the Zoning Committee like that): 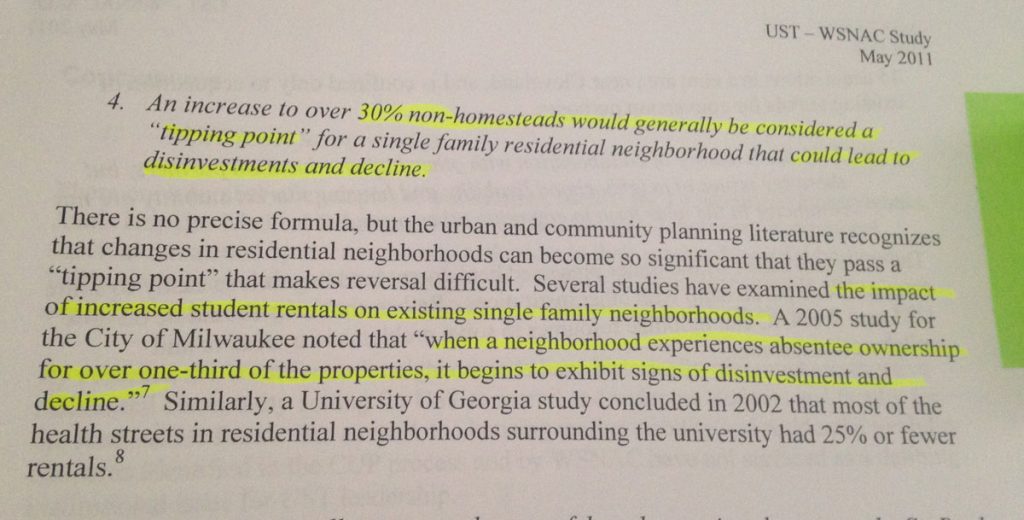 And here’s how it reads with the category removed: 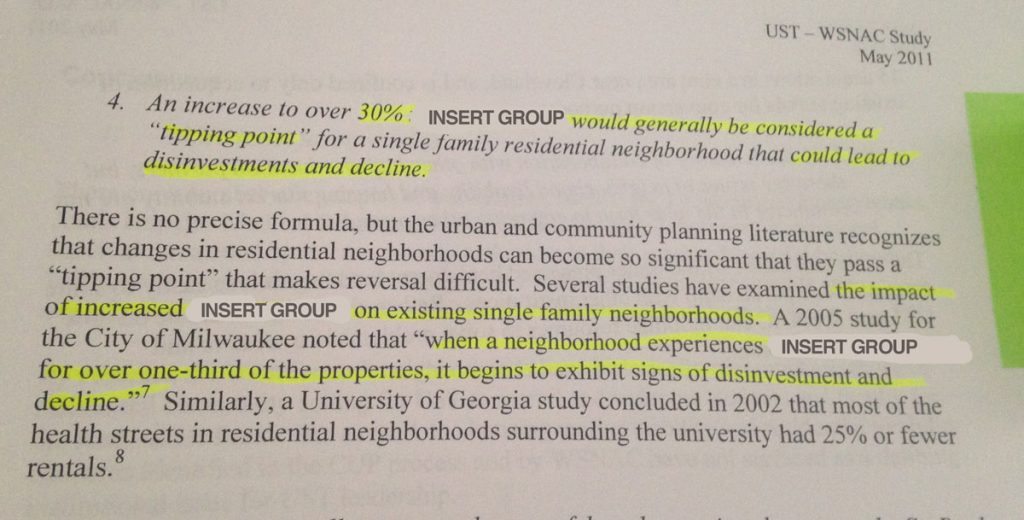 Again, I ask myself the question: how does that statement feel if you replace one group of people with another? What happens if you put in a racial or religious category there, instead of “non-homestead” or “student rentals”?

This isn’t to say that these claims or comments are incorrect, misguided, racist, or anything like that. In fact, these claims might be factually accurate and may be sound in many ways.

But I still think it’s important to put things in an historical perspective. I try hard to remember that the history of United States housing policy is extremely racist. For example, it used to be commonplace to put into one’s mortgage racially restrictive covenants about who could purchase homes. Similarly, historical claims about impacts of groups of people on property values, or troubling assumptions about behavior, led to huge problems around race and housing.

What about protected classes?

One final catch is that the United States legal system has rules about which groups of people are “protected” and which are not. For example, our laws theoretically protect people on the basis of sex, race, religion, national origin, and disability status. There are even protections for people over the age of 40 (age discrimination).

However, as I was told once during a public hearing, being a student or a renter or someone under the age of 40 is not a protected class. Theoretically, it is just fine to enact a policy that discriminates against these groups.

But just because a policy is legal does not make it right. To my mind, one of the big lessons of history is that concepts of protected classes have not always reflected moral or ethical positions. For example, as far as I can tell from a few minutes of scanning legal explainer websites, sexual orientation is still not a protected class, which is why the North Carolina legislature can go ahead and create bathroom laws that discriminate against transgender people.

Just because “students” or “renters” or “St. Thomas attendees” or “the homeless” or [X type of person] are not protected classes, it doesn’t mean I’m comfortable making sweeping generalized statements about those groups. At the very least, I find it helpful to replace the group in question with a group that has been traditionally discriminated against.

In Conclusion: A Useful Exercise

There’s a lot to unpack here, and a lot more to say. But I wanted to share this because, as someone tasked with thinking about housing policy, equity, and how to balance competing needs and visions for a city, this is one of the exercises that I find useful when weighing public comment.

In the case of this particular site plan application, these two public comments did not carry much weight for me. The merits of the case seemed clear simply because the application was “by right.” In other words, it did not request any re-zonings, conditional-use permits, or variances. Regardless of whether or not I liked the project, I could not see any pressing reasons to deny the application.

For me, the Category Test is not a litmus test. In many cases, these aren’t black-and-white situations where there’s a clear right and wrong lesson to be drawn. But given how pervasive categorical discrimination has been throughout the history of housing in our country, this is just one of those things that I do in my head when reading through public comments.

11 thoughts on “My Category Test for Public Comments”