Here’s a dumb chart from a Richard Florida article to start your day off right. It shows a global (!) list of cities according to “median multiple” income in those cities. The list is diverse and covers much of the Global North. 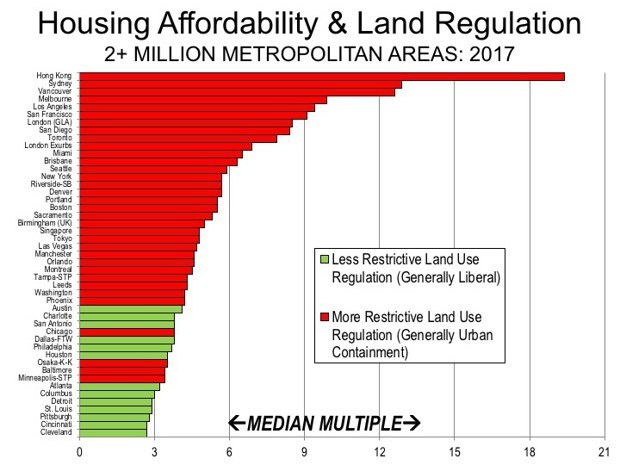 Several factors appear to be driving the housing affordability crisis of the advanced world. Expensive cities have simply not built enough homes to keep up with growth in employment or population. There are many well-known reasons for this, including NIMBYism, restrictive land-use polices, and the constraints of geography. And, of course, we have seen a sweeping urban revival and the rise of winner-take-all urbanism, in which talent, technology, and other economic assets are densely packed into a small number of neighborhoods.

The problem is, of course, that for some reason the chart splits the cities into two categories: “more restrictive” and “less restrictive” according to “generally liberal” and “land use regulation.”

The Twin Cities is in the former camp because it’s a “blue state” or has the Met Council or something, I guess, whereas St. Louis, Detroit, Charlotte are in the latter camp. Meanwhile a huge number of cities in countries like China (e.g. Hong Kong) and Singapore (!) are listed here and marked in red alongside Minneapolis. Meanwhile, Las Vegas is red too?

The chart implies that the Twin Cities has more in common with Singapore than Cleveland, which is just plain silly. This is the kind of chart that makes people less informed.

2 thoughts on “Chart of the Day: Twin Cities Housing Affordability on a Global Scale”