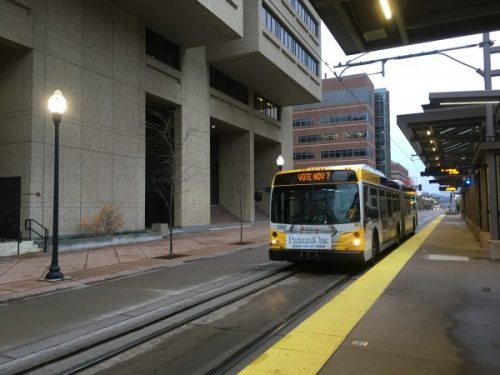 We are 7 days out from Election Day. It is important that you vote, if you haven’t already. Your vote has the power to influence so many things transportation-related. For example, like how Metro Transit is run. There are very important races at the Federal level, but the local races have much more impact.

First, you will have the opportunity to vote for Governor. As part of being Governor, they appoint 17 – yes, 17 – people from across the region to serve on the Met Council. These people run Metro Transit. They decide what buses to buy, when fares should change, how a transit project should be built. Vote for a Governor who will appoint the people who will be accountable to you and your beliefs.

Second, many seats in the State House and Senate are either open or are up for re-election. Combined, the Legislature has the ability to decide how much money it gives to Metro Transit, for operating and project costs. Never shall we forget that Republican legislators tried to cut Metro Transit service by 40% last year. They think that transit should be self-sustaining, but the reality is that no agency in the world has achieved this. The places that have done it, Hong Kong’s MTR, for example, do so through speculation.

County Commissioner races are also very important. Did you know that, every time you buy something in Hennepin and Ramsey County, you’re paying half a cent into the transit system? They decide how that money is spent. For those living in Hennepin County Districts 3 or 4 (St. Louis Park, South Minneapolis, Fort Snelling), the Twin Cities Transit Riders Union held a forum back in April about the race. Click here to watch the livestream and be informed about where they stand on transportation and affordable housing issues with respect to racial justice.

And let’s not forget the sheriff. The sheriff plays a significant role in determining who gets to feel safe riding Metro Transit. Safety should neither be determined by the color of your skin, nor whether or not you have legal immigration status.

You have seven days. There is an array of resources out there for you to decide how to vote. It’s likely one of your friends know a candidate who is running, and can tell you a little about them. It’s also likely that your community has an early vote center. Absentee balloting is available should you not feel comfortable going to a polling place. Your employer is legally obligated to give you paid time off to vote. Finally, you do not need an ID to vote; at the bare minimum, you just need a neighbor to tell the election judges that you live near them. You have no excuse. Go out and vote.

6 thoughts on “Your Vote Matters – Get Out And Vote”